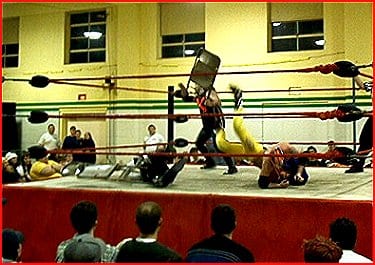 IWC’s official television taping turned out to be one of the most eventful and chaotic shows ever! Competition, brutality, betrayal, surprises and vengeance were all contributing factors in making this night an unforgettable occasion.

Now that Sterling James Keenan, and apparently Raven as well, have made it official that they are part of Doe’s evil army, Doe has become more powerful than ever. It could be only a matter of time before the fate of IWC lies in his hateful hands.

Also on hand was DISCO INFERNO. Disco interrupted a match-up between DUSTIN ARDINE and SPIDER MASK, claiming he was tired of waiting to give the fans what they want, which of course is to see Disco Inferno DANCE! Before Disco could begin to boogie, the returning DENNIS GREGORY arrived on the scene, and physically drove Disco from the ring. Later on, Ardine attempted a measure of revenge against Disco, but came up short. Ardine was being pummeled to a point where Disco was dancing and bragging to anyone who would pay attention to him, rather than focus on his match. That all ended when Gregory appeared again, attacking Disco once more. Disco won by DQ, but the real story was his vendetta with Gregory.

That vendetta came to a head later that night, when the two met in the ring. Disco was his usual cocky self, dancing and showing off all the way through the match, but with good reason, as he had been targeting Gregory’s surgically repaired knee. However, Disco’s arrogance came back to haunt him when, while attempting to hit his finisher “The Chartbuster,” Gregory surprised him with a backslide, and was able to hold Disco down for 3.

After a heart-felt speech from the injured ERIC XTASY, the replacement partner for JT RODGERS was announced as none other than “BALLS HOT” TROY LORDS. The Rodgers/Lords reunification proved to be a successful one, as the duo retained the IWC Tag Team Championship Titles against THE DEVIL’S ADVOCATES in the most emotionally moving moment of the night.

RAVEN started his match with CM PUNK in the locker room, and it eventually spilled out into the ring, and the bell was sounded even though the match had been scheduled for later on. Both men went through a very physical battle, until it took not one, but two Evenflow DDTs to keep Punk down for the 3 count.

Although Punk came up just short of defeating Raven, he was able to earn a submission victory against the up-and-coming CARLTON KAZ.

AL B. DAMM scored what many call an upset victory over DEAN RADFORD. Damm was trapped in a power match, which was to his disadvantage. However, when Radford made one mistake, in this case going for an overly-cocky pin, Damm was able to reverse it into a pinfall of his own and get the win.

SETH JAMES took on T. RANTULA, but Seth insisted no weapons be used. T played along for a while, but he eventually decided to retrieve a street sign, which referee CHRISTOPHER KALIKAPELA stopped him from using. As T protested by gripping the throat of Kalikapela for an intended chokeslam, James used the street sign himself, which played a big part in his victory.