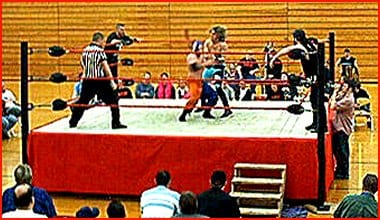 In conjunction with the debut of IWC Ignition Television on WBGN-TV on Friday night, April 11, IWC rocked Munhall and Uniontown with its unique, innovative brand of action! Both nights were memorable and very eventful, so let’s relive IWC’s biggest weekend to date

JIMMY VEGA$ was given the unenviable task of fending off two challengers in one night, as he was scheduled for two different title defenses. His first opposition was none other than TREVOR LOWE, and if Vega$ was able to escape Lowe with his title, he would have to compete against one of the most diabolical individuals in the business, RAVEN.

Going into battle, Lowe had to have known in the back of his mind that this was more than likely his final shot at the gold. Lowe has had two other opportunities in recent memory and, although he wrestled two of the better matches of his career, he fell just short of claiming the ultimate prize. If Lowe came up short again, it could take months to work his way back toward the top. Lowe came into this battle with the same determination and ruthlessness, but Vega$ was on a mission of his own. He knew he had to dispose of Lowe as quick as possible so he could be ready for Raven, and Vega$ did just that, hitting the Cha-Ching Slam to polish off Lowe.

When it came time for Raven, an extra added twist was involved when it was announced that the match would be contested under “Raven’s Rules,” meaning, of course, NO RULES. Vega$ protested that edict, and was able to keep action in the ring as a pure technical contest until Raven kept one-upping him in that department, prompting Vega$ to get more down and dirty. The two brawled around the building before making their way back into the ring. Raven continued controlling the match, so much so that Vega$ attempted to use a chair, a plan which backfired, as senior referee CHRISTOPHER KALIKAPELA was clobbered by the chair. Raven hit the Evenflow DDT for the pin, but no one was there to make the count. By the time Raven had revived the referee, Vega$ took a page out of Raven’s book, a drop toe hold onto a chair, to defeat him and retain his title. Not only did Vega$ defend his title twice in one night, he also added to what he calls the “ECW TRIPLE CROWN” of ex-ECW wrestlers he’s defeating, including TOMMY DREAMER, THE SANDMAN and, of course, RAVEN.

One of the most longstanding rivalries in IWC history continued as JT RODGERS and “BALLS HOT” TROY LORDS wrestled as SEXUAL HARASSMENT (with Troy replacing the recently injured ERIC XTASY) and defended the tag titles against DEVIL BHUDAKAHN and “THE GHOST” GLENN SPECTRE in a “Double Tables” match, meaning both members of a team must be tabled to end the bout. It was a very physical war, with the DEVIL’S ADVOCATES controlling much of the early stages, pummeling JT into a seemingly unbreakable table a number of times, until driving him through the table with a superbomb to eliminate him, leaving Troy with seemingly insurmountable odds. Lords was able to isolate Devil as they were both perched on the middle rope, with a table ominously standing below them. Meanwhile, Glenn Spectre was on the floor calculating his plan, then he put it into action. Spectre pushed both Lords and HIS OWN PARTNER through the table, eliminating them both, making Glenn the sole survivor of the match, and making Glenn and Devil the two-time IWC Tag Team Champions. Spectre had one of the best nights in his career, not only did he regain the IWC Tag Titles, he also defeated “Balls Hot” Troy Lords in singles action earlier in the night by hitting “The Ghostbuster.”

Another superstar with an eventful night was DEAN RADFORD. After earning a hard-fought victory over “THE DREAMACHINE” DUSTIN ARDINE, Radford was approached by IWC promoter NORM CONNORS, who reminded Dean of how Dean “owed him one.” He then brought up the fact of Sterling James Keenan “punking him out” a few months ago. Where was Norm going with this?

The Radical One also reappeared later that night in a tough battle against DENNIS GREGORY. After a very competitive battle, Gregory hit a reverse DDT into a backbreaker for the win.

T. RANTULA defeated “THE BIG STIFF” SETH JAMES in a Lumberjack Match, featuring members of the West Homestead Volunteer Fire Dept. as lumberjacks. The VFD was obviously partial to the hometown T. Rantula, and their favoritism helped T walk out on top.