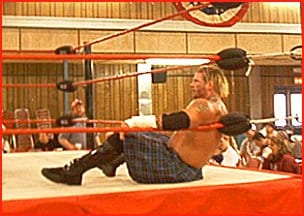 In conjunction with the debut of IWC Ignition Television on WBGN-TV on Friday night, April 11, IWC rocked Munhall and Uniontown with its unique, innovative brand of action! Both nights were memorable and very eventful, so let’s relive IWC’s biggest weekend to date

DISCO INFERNO’s arrogance came back to bite him in his booty, as he had to face RAVEN one-on-one. Disco had signed for this match under the assumption that Raven would defeat JIMMY VEGA$ for the IWC Heavyweight Title the night before, but Vega$ was able to get the victory, leaving Disco without a title match.

Disco was apprehensive about this match and even tried to change the match stipulation several times: From Raven’s rules, to a regular match, to a shootfight, and even to a “Lights Out Texas Death Match,” but Raven out-performed Disco in every stipulation he tried. Finally, Disco gave up on changing the rules and decided to focus on Raven’s knee, even applying the time-tested Figure Four Leglock. Disco hit the Village People’s Elbow and The Chartbuster, but Raven recovered from both and sent Disco down with the Evenflow DDT. An unusually high-spirited Raven gets the win.

New IWC Tag Team Champions THE DEVIL’S ADVOCATES, flanked by mastermind JAKE GARRETT, continued their storied saga with SEXUAL HARASSMENT in a non-title war. Sexual Harassment had things well in hand until a distraction from Garrett and an outside assist from DEVIL BHUDAKAHN, GLENN SPECTRE was able to score the pin (with his feet on the ropes, mind you) to retain the titles. Escape may not be so easy for the Advocates on Saturday, May 10 when these team teams clash again: WITH THE LOSERS EATING DOG FOOD!

T. RANTULA and SETH JAMES butted heads once more, this time on a level playing field. The match didn’t take long to go the hardcore route, with both men brawling, bleeding, and bashing each other with a street sign, all over the building. Despite the madness, James’ pure strength and tremendous skill was the deciding factor, as he stunned T with a sit-out powerslam to defeat him.

– The new attitude of STERLING JAMES KEENAN paid off as he defeated “THE DREAMACHINE” DUSTIN ARDINE with the “MK Ultra.”

– “SIMPLY THE BEST” CARLTON KAZ was able to get back on the winning track, as he defeated Dustin Ardine as well.

– DEAN RADFORD obliterated J-RU. The Radical One got the pin after a Super-Radicator off the top rope.