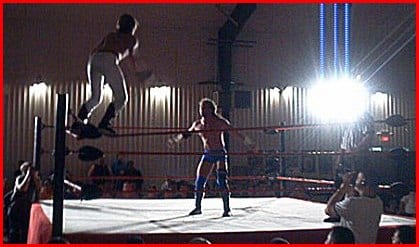 A night where destinies were fulfilled and dreams were shattered

The most prestigious tournament in independent professional wrestling today rocked the White Oak Athletic Association, delivering the most talent-filled, competitive IWC card to date. The wrestling world was watching as eight men gave it their all to win one of the most prized championships around: the IWC Super Indy Championship Title.

Round One kicked off with BJ Whitmer vs. Sterling James Keenan. Whitmer had previous tournament experience, winning the “Ted Petty Invitational” last year, while Keenan was probably the least known of all the tournament entrants, meaning he had the most to gain. The match was very evenly matched, with a lot of physicality, but Whitmer made the mistake of climbing the ropes to attempt a high-risk move. Keenan pushed referee Bruce Gray into the ropes to unbalance Whitmer, allowing Sterling to roll him up for a pinfall, hitting a modified version of his MK Ultra finisher in the process for a victory.

Matt Stryker then took on Japanese sensation Ikuto Hidaka, who also had tournament experience going into this match, winning an Independent World Jr. Heavyweight Title Tournament in Japan in February 2002. Stryker did a great job of playing to his strengths, keeping the match mat-based. He couldn’t ground Hidaka for the entrie match, however, as Hidaka had a great flurry of offense, using his signature Rope Hanging Front Neck Lock and a beautiful missle dropkick. Stryker was able to regain control and apply the ankle lock submission, and Hidaka had no choice but to tap.

Raven started his first round match with Christopher Daniels as only Raven can: on the microphone. Raven wasted little time attempting to get a psychological edge on Daniels, berating everything from the Fallen Angel’s nickname to his hairline. The ploy worked perfectly, as an upset Daniels began brawling with Raven, a scenario that obviously favors Raven. Things eventually settled down and returned to the ring, but the chaos continued, as the referee was inadvertently knocked down by Raven’s clothesline. That allowed Raven to hit the Evenflow DDT on Daniels, but no ref was conscious to count. Once the referee had recovered, so had Daniels, who surprised Raven with an enziguri kick and the three count.

Round Two saw Sterling James Keenan and Colt Cabana go one-on-one. With the Super Indy prize just two victories away, both men were determined to make an impact in this match. Sterling James Keenan had a sound strategy, spending time working on Cabana’s knee. Undaunted, Cabana continued to fight through the pain and punishment. Neither man ever had a decisive edge for an extended period of time, as was evident by the match ending. Both men exchanged counter moves and counter-counter moves until Colt finally maintained enough leverage to hit the Colt 45 for the three count. Cabana was now one win away from the ultimate prize. After the match, Cabana extended his hand but Keenan delivered a cheap shot to the face and left in a fit of rage.

Matt Stryker took on Christopher Daniels, continuing the strategy that enabled him to defeat Hidaka: a smart ground-based attack. It’s no secret that Daniels likes to fly, but he was rendered without an aerial attack in this match. Stryker used a wide array of submission moves, stretching various parts of Daniels’ anatomy. Daniels was able to fight through the pain and make a full-fledged comeback within due time. Daniels hit a blue thunder bomb, but only got a near fall out of it. Daniels continued the attack, and went for the enziguri kick, but Stryker countered beautifully, grabbing Daniels’ ankle and applying the dreaded ankle lock submission. Daniels tried with all he had to hang on, but Styker wrenched the ankle back further and applied a legscissors for added pressure, forcing Daniels to tap out. Stryker was now one win away from the ultimate prize as well.

Before long, the moment of truth had arrived — Colt Cabana vs. Matt Stryker — with the winner becoming the new IWC Super Indy champion, and only the third champion in the title’s 14-month history. It was a brutal match filled with hard strikes and painful submissions. Stryker showed he scouts his opposition well, as he went to work on Cabana’s knee viciously. Eventually, Cabana’s knee was at a state where he couldn’t even support his own weight, and Stryker began to get a little overconfident. This lapse in concentration was the slight opening Colt needed to slowly get himself back into the match. Once Colt had the momentum back on his side, he gave all he had, hitting a hurracanrana and neck breaker, getting near-falls on both occasions. Undaunted, Stryker refused to quit and he battled back and even got the anklelock on Cabana. However, with all of White Oak cheering him on, Colt was able to crawl to the ropes after several moments of agony. Stryker made the mistake of going back to the ankle, as Cabana rolled him up for the three count. Colt Cabana is the NEW IWC Super Indy Champion! Cabana gave a brief speech, thanking everyone, before being helped to the back.

Cabana has fulfilled his destiny, winning one of the most prestigious championships in indy wrestling today. Now, can he maintain his notoriety as the best indy wrestler around? Things can only get more difficult as Cabana must prepare for a grueling road of extremely difficult title defenses against the best in the world. Cabana has done it once before as the IWC Heavyweight Champion, but is he prepared for what lies ahead? Only time will tell.

NON-TOURNAMENT MATCHES
Ever since Jimmy Vega$ injured the knee of Dennis Gregory, winning the IWC Championship from him in the process, a rematch has been inevitable. Gregory finally got the rematch that was six months in the making, but before the match, T. Rantula unexpectedly appeared and issued a warning to whomever would come out victorious. T stated he had won every major title in the area, and now he’s coming after the IWC champion. With this warning fresh in mind, Vegas and Gregory proceeded to beat the hell out of one another. Gregory, with six months of rage pent up in him, started out dominant but Vegas was soon able to subdue him. Vegas, still concerned about possibly losing, grabbed the title belt in an attempt to use it, but was stopped by referee Christopher Kalikapela. As the two struggled over the belt, Gregory attempted a cross body, but Vegas pulled Kalikapela in front of him, thus sending the referee to dream street and allowing Vegas to use his belt as a weapon. However, when the ref came to, Gregory was able to kick out at two. Vegas began to get frustrated and began to dominate the dazed Gregory, finishing him off with an overhead suplex to retain the title.

Tag champions Devil Bhudakahn and Glenn Spectre defended the titles against JT Rodgers and Troy Lords in perhaps the most bizarre stipulation in IWC history: Losers Eat Dog Food. Rodgers and Lords had Trevor Lowe in their corner to counteract Jake Garrett, which came in handy early. The match started off as an all-out brawl, but eventually Bhudakahn and Spectre took control of the match and isolated Lords from his partner, hitting him with a variety of double-team moves. Lords was able to muster enough strength to hit the Ballbreaker and tag Rodgers, who began cleaning house. Devil gave Rodgers his hardway suplex and went right back to punishing Lords. But Rodgers recovered quickly, and he and Lords hit a double-inverted DDT for the win to become tag team champions once again. After the match, Bhudakahn, Spectre and Garrett were all forced to eat dog food fed to them by Rodgers, Lords and Lowe or else they’d lose their jobs. They ate the dog food and left humbled and humiliated.

Bubba the Bulldog took on Shirley Doe in a Dog Collar Match. Of course, dog collar match rules state that you must touch all four corners in succession to win. Doe attempted to work on Bubba’s hand, but it was not quite as successful as it was in other matches. Bubba’s animalistic side was in full force tonight as he used the chain to his advantage much better than the usual crazed maniac Doe. After several minutes of punishment which ended with three sickening consecutive chair shots to Doe’s skull, Bubba began to touch the four turnbuckles but, little did he know, Doe was staggering right behind him doing the same. Once Bubba got to three, Doe pulled him away from the fourth corner, delivered the Sillyhead 2, and touched it himself for the victory. After the match, something in Bubba’s head went wrong. The months of berating from the fans and the loss to Doe was too much for Bubba to take as he began yelling and screaming at the fans who jeered him. It was as if something had snapped inside him, and he was experiencing a psychotic break.

Dean Radford and Dustin Ardine knew going into their match that this was their chance for their careers to take a major upswing if they were victorious at a show of this level of importance. They both put it all on the line for this match. Dustin hit a beautiful plancha from the top rope to the floor but when he went for a second high risk move, Radford caught him and delivered his devastating spinebuster on the hard floor. Radford kept the upper hand, but Ardine showed great heart in fighting back. Ardine went for another high risk move, but Dean caught him in mid-air and hit the Radicator for an impressive win.