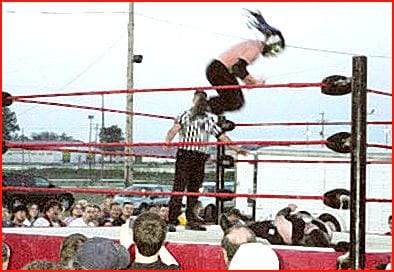 The International Wrestling Cartel has once again outdone themselves, as over 5,000 fans packed into the Big Butler Fair’s grandstand seating to watch the excitement and intensity of IWC wrestling action. It was a night of mammoth proportions: a determined warrior unseated a cocky champion from the top of the mountain; four men were put through physical and mental anguish with their championships and their livelihoods on the line; two hate-filled rivals attempted to settle it all in one sickening display of vengeance; and two of the greatest of all time met one-on-one in a true legends match.

Jerry “The King” Lawler. “The American Dream” Dusty Rhodes. Their past accomplishments speak for themselves. They’ve amassed a large amount of regional and world titles over the years, but have never met in a high-profile match until IWC brought them together on June 28. Both men entered the ring to huge ovations from the capacity crowd, but that would be short-lived as Jerry Lawler’s disrespectful comments toward the fans and the city soon swayed the crowd into a Dusty-supporting frenzy. When the match began, Rhodes was in full control, hitting Lawler with a barrage of his world-famous elbow shots. Lawler attempted to continue his stalling tactics on the mic, but Dusty continued to assert the advantage. Finally, through the help of a foreign object, Lawler was able to subdue Dusty and control the match. The match continued to degenerate when Dusty was able to get a hold of the object and use it on The King, all unbeknownst to referee Bruce Gray, who donned the more traditional blue shirt/black bowtie for this legends match. Lawler was able to sway things back in his direction, and attempt a cheap pinfall victory with his feet on the ropes, but Gray caught him. Dusty Rhodes turned the tables, executing the exact same cheap pin Lawler had attempted, only this time getting a three count. On this night, Dusty Rhodes proved he can still go after all these years, and cemented himself as one of the greatest World’s Heavyweight Champions of all time.

IWC’s special guest, none other than former WWF Intercontinental Champion D’Lo Brown, was met with a rude welcome by the always-arrogant Sterling James Keenan. Keenan’s pre-match comments only fueled D’Lo’s fire, who started the match very quickly and aggressively. D’Lo’s one mistake may have been catering to the crowd during this beating, as Keenan found an opening and began to take control, at one point focusing on D’Lo’s knee. D’Lo was able to rebound and make the classic comeback, but when he went for his spinning powerslam, the referee got in the way, thus knocking him out momentarily, prompting, of all people, Bubba the Bulldog, to make an appearance and hit his inverted Stunner on D’Lo. Apparently, Bubba’s frustrations with the fans have grown to the point where he has to take out his anger on those more popular than he is. Bubba’s interference didn’t go unanswered however, as Al B Damm aided D’Lo in the match, even going as far as hitting a modified version of his “Hot Damm,” a corner-to-corner dropkick on Keenan (probably best known in some circles as the “Van Terminator”). When D’Lo and the referee recovered, a pinfall attempt only reached a two count, but Keenan was dazed enough for D’Lo to hit the Sky High and the Lo Down for the pinfall victory. After the match, D’Lo challenged Bubba for a match next month as a way of exacting revenge for Bubba’s involvement on this night.

After months of chasing the IWC Championship, Dennis Gregory knew going into the match that this was his last shot at finally unseating Jimmy Vega$. Vega$ had injured Gregory last December, taking the title in the process, and this was Gregory’s last shot at redemption. Although still not a full 100% from knee surgery, Gregory put on the effort of a lifetime. Despite Vega$’ offense centering around the knee, Gregory fought through the pain undaunted, and kicked out of two of Vega$’ specialties: The One Arm Bandit, and The Cha-Ching Slam. Vega$ was clearly thrown off his game at this point, and was surprised by a quick small package by Gregory to lose the match, making Dennis Gregory the NEW IWC HEAVYWEIGHT CHAMPION. A clearly beaten and humbled man, Vega$ congratulated Gregory, shook his hand, and took this time to announce he was stepping down and moving on to other endeavors. The former champion left dejected as a cavalcade of superstars emerged from the locker room to congratulate Dennis Gregory, the new IWC Heavyweight champion.

The Devil’s Advocates and Sexual Harassment battled in eight tag matches before and split the series with four wins apiece, but now it was time for the final battle, with very high stakes, and in a Best of Three Falls format. Someone would end up losing their pride, their dignity, or maybe even their career. Both teams new each other so well, so formulating new strategies was key. The Advocates were able to come out on top in the first fall and selected the “Hair vs Mask” stipulation to be in effect for the second fall, meaning whomever was pinned in the second fall would lose their respective head accessory. The Advocates’ plans backfired and Sexual Harassment caught Devil Bhudakahn and Glenn Spectre before they could even get out of the blocks, scoring a very quick pin on Spectre, meaning not only could JT Rodgers and Troy Lords select the stipulation for the third fall, but Spectre would have to unmask. Spectre reluctantly unmasked and the third fall began under the “Loser Leaves Town” stipulation. However, the final fall was far from even. Not only did the Advocates’ mastermind, Jake Garrett, interject himself numerous times, but The Ballard Brothers appeared and attacked Sexual Harassment. After Harassment had received The Advocates’ Theater of Pain and the Ballards’ “Double Minor” as part of this 5-on-2 attack, the odds had become insurmountable as Troy Lords was pinned for the three count, meaning not only do the Advocates become three-time IWC Tag Team Champions, but Troy Lords is forced to leave the company. A heart-warming comeback last March has sadly ended with an unfortunate departure for “Balls Hot” Troy Lords. We here at IWCWrestling.com would like to wish him luck in all his future endeavors, whatever they may be.

Bubba the Bulldog continues his disgusting ways. As you read above, he’s now resorted to attacking wrestlers more popular than him, apparently motivated by extreme jealousy. This trend started when he teamed with “The Dreamachine” Dustin Ardine to battle the debuting Ballard Brothers. Bubba told the story of when he was young and inexperienced, a veteran by the name of B.A. Briggs took him under his wing and helped him “reach the next level” and now Bubba wanted to do the same for the young Ardine. He seemed sincere throughout most of the match, but when the Ballard’s flawless double-team offense seemed to be getting the most of Ardine and he needed a tag, Bubba turned his back on his partner and left him there, allowing The Ballards to easily attain victory from there.

T. Rantula and Seth James finally settled their longstanding rivalry, and what better way that with a Table Match. Both men pelted each other with high-impact offense, obviously out for more of a quick kill than a slow wear-down process. And, of course, T’s trusted rusty street sign came into play as always. Thanks to one major slip in judgment on Seth’s part (an attempted hurancanrana off the top rope), T was able to counter, power-bombing Seth through the table from the second rope.

Al B Damm and Carlton Kaz continued their exciting and always-competitive IWC series, which was led by Damm 2-1 going into this match-up. Both men continued their standard of highly competitive and exciting matches, as both men gave it their all as always, as is expected when you have two rivals who know each other so well. However, Damm bested Kaz again, making it 3-1 in their IWC series. This match had been billed as a “Dunk Tank Match,” meaning IWC fans would have the opportunity to “dunk” the loser, in this case Kaz, but unfortunately time constraints prevented that from happening.

Dean Radford continued what has been a very impressive streak in recent months. Radford was easily able to outpower his opponent, Butler’s own Trevor Lowe, a very tough individual in his own right, as he has come within a heartbeat of capturing the IWC Title on more than one occasion. Lowe had the match well in hand, even securing the dreaded “Nurple” on Radford, but maybe it was the fact that he was in front of several thousand hometown fans, or maybe it was just his unorthodox style, but Trevor made the mistake of wasting too much time, something Dean has been guilty of in the past, meaning Dean knew just how to capitalize. Dean hit the Radicator out of nowhere, but was too fatigued to capitalize immediately, allowing Lowe to miraculously kick out of the attempted pinfall. However, Dean’s resourcefulness proved too much for Lowe’s determination, as Radford hit a stunner off the top rope to polish off Trevor Lowe.