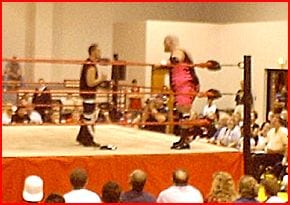 IWC Delivers Its Most Shocking and Exciting Show to Date

A huge crowd packed into the CCAC South Campus in West Mifflin, PA on Saturday night, August 23, for a night none of them would soon forget. No one was prepared for what was to transpire before the night would end.

August 23 was supposed to be Eric Xtasy’s big night. After a six-month hiatus due to a severe leg injury, Eric was back to do what he loves most and does best: entertain the fans with his in-ring action. His tag team partner, JT Rodgers, had been found beaten and battered, so his tag match was changed to singles action, and he battled The Mysterious X. X has been a thorn in the side of Sexual Harassment since his debut appearance last January, and this was Eric’s chance for retribution and to finally unmask X and expose him for the evil individual he is. X had targeted the surgically repaired leg, but the adrenaline of being back in the ring kept Eric from feeling the pain. He recovered, hit the “Xorcist” and the “Happy Ending” and was doing well. Then X unmasked and Eric’s entire world turned upside down.

After Lords unmasked, he and Sterling James Keenan attacked a stunned Eric, until JT Rodgers, apparently returning from the hospital, cleared the ring with the help of a chair. Then he turned around and clocked his best friend Eric with that chair! A three-on-one beat-down ensued until the locker room emptied with help for Eric. As he left, JT Rodgers punched his boss, IWC promoter Norm Connors, square in the face, knocking him down in one of the most shocking, reprehensible things I have ever seen. Lords, Rodgers, and Sterling left the scene, leaving mass chaos behind them.

Why did Troy Lords turn his back on Eric Xtasy? How long has he been planning this for? How long has JT Rodgers been involved? And why did he turn on his best friend? Hopefully all these questions will be answered in the coming weeks.

Eric Angle made his IWC debut in very impressive form. Bubba the Bulldog decided to run his mouth before the match again, claiming he was responsible for all of Kurt Angle’s success. That didn’t sit well with Eric, who emerged from the back determined to shut him up once and for all. In less than TWO MINUTES, Eric had Bubba tapping out to the patented anklelock submission. After Eric had won, Norm Connors encouraged Angle to “break Bubba’s ankle.” Angle once again applied the anklelock and PROCEEDED TO BREAK BUBBA’S ANKLE before none other than Jimmy Vega$ emerged from the crowd and Cha-Ching Slammed Eric Angle. Is Vega$ back in IWC already? And is he aligned with Bubba? IWCwrestling.com has received word that due to Bubba’s broken ankle at the hands of Angle, he will NOT be appearing at the September 13 “REVENGEANCE” show at CCAC South Campus.

Previously in the evening, Bubba also stuck his nose in the Dennis Gregory versus Dustin Ardine Heavyweight Title Match. Ardine was wrestling his heart out, but fell short of victory. All of a sudden, Bubba appeared, throwing powder in both men’s eyes. Bubba, in a jealous rage, brutally attacked Ardine on the arena floor as T. Rantula suddenly emerged and chokeslammed Gregory twice. Questions also must be raised about Bubba and T’s possible relationship. Are all these men uniting for a common cause or do they all have separate agendas?

Colt Cabana defended his Super Indy Title against the man that never lost the belt, AJ Styles. After a scientific wrestling clinic from both men, unfortunately the match went to a 20-minute time limit draw with Cabana retaining the championship. Colt tried to shake AJ’s hand at the conclusion of the match, but AJ refused and walked away. Was it just the heat of the moment, or is AJ having trouble coming to grips with the fact he isn’t officially recognized as the best Super Indy in the world today?

Jake Garrett, Devil Bhudakahn and “The Ghost” Glenn Spectre, collectively known as the Devil’s Advocates, were somehow able to successfully defend the tag team titles against the ultra-tough and world-renowned team of M-Dogg 20 and Josh Prohibition, a.k.a. Youthanasia. The Advocates did not seem to be on the same page throughout the whole match, but they put their differences aside for the good of the team. You have to believe there will be another day for M-Dogg and Josh, but how bad is the dissention in the Advocates’ locker room?

Dean Radford matched power-for-power with indy standout BJ Whitmer. Radford, used to dominating smaller opponents, had to try to adapt to the larger and stronger Whitmer. Radford looked very impressive, but it wasn’t his night. BJ Whitmer is back on the winning track in IWC.

“Barbaric Berzerker” Jimmy Jacobs and Alex Shelley brought their feud to IWC for the first time as both men had an extremely impressive debut that brought the house down. The crowd was louder than ever when the “HUSS!” chants for Jimmy Jacobs started. Jacobs’ unorthodox hussing won the hearts of the fans and his exceptional skill won him the match. In addition to the exciting, highly competitive fast-paced in-ring action, the match was also special because of who was watching. Current WWE superstar Zach Gowen was IWC’s special guest that evening. Zach seemed to enjoy the entire stacked card, and he took a special interest in this match considering it featured one of his best friends, Alex Shelley.

Perhaps the most arrogant man in IWC history, Supreme Lee Great, was just that in his IWC debut against one of the fastest rising stars in the promotion, Al B. Damm. Both men delivered very impressive efforts, but SLG was able to score the win, a huge victory in just his first match here.

We were also treated to everyone’s favorite fish, the cult hero turned mainstream phenomenon, Shark Boy. Sharky battled Carlton Kaz, who probably didn’t know what to expect. Kaz’s displeasure over his lack of coverage on this very website in favor of covering all of our newer stars, motivated Kaz throughout this match but after some wrestling, some biting, and even a “Big Wiggle,” Shark Boy hit the DSD on Kaz to score the victory, as his very vocal Pittsburgh branch of fin followers continue to salute the shark. After the match, Kaz was approached by Supreme Lee Great who seemed to have something on his mind. What could these two be plotting?

A lot of unforgettable events took place that night, and a lot of questions were answered. But those answers themselves turned into questions. What answers will be waiting for us when IWC returns to CCAC South Campus on Saturday, September 13 for “REVENGEANCE”?