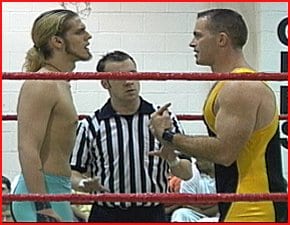 The “November Pain” television taping on Saturday night, November 1 will go down as one of the most tumultuous shows to date. Debuting stars made huge impacts, intense rivalries escalated even further, and a new champion was crowned.

When Sterling James Keenan spoke on this very website about a week before his championship match, he talked of an “unstoppable uprising” that would occur when he battled Dennis Gregory for the IWC Heavyweight Championship. Sterling promised that he and presumably his partners in crime, JT Rodgers and “Balls Hot” Troy Lords as well, would reign atop the IWC roster. Add that to Sterling’s apparent relationship with ultimate power-hungry individuals Bubba the Bulldog and Jimmy Vega$ and that makes any and all stroke Sterling could get that much more frightening.

Promoter Norm Connors had laid down the edict, however, that no outside interference would be tolerated. Connors originally granted Sterling the opportunity for a title shot due to his impressive in-ring ability, and wanted to make sure that would be the only thing Sterling could rely on, not strength in numbers. This gave Dennis Gregory the psychological advantage, and he wasted no time augmenting that, calling Sterling such things as “Skinny Me” before the match. However, on this night Sterling didn’t need a psychological edge or strength in numbers, as one was enough. After a hard-fought back and forth match, Sterling trapped Gregory in the MK Ultra to not just defeat him for his coveted IWC Championship, but to defeat him CLEANLY for the IWC Championship. Sterling showed he can still get it done on his own when he needs to, and he did in a big way, as he can now be labeled as “champion.”

But with the championship comes a degree of backstage stroke and power. Sterling now has the ability to throw around his star power in order to get what he wants, and that could be a scary thought. Will Sterling abuse his newfound power? And what will become of his partnership with Bubba the Bulldog and company? Only time will tell.

Unquestionably the two biggest mouths in IWC today collided in the ring when Bubba the Bulldog took on the legendary “Franchise,” Shane Douglas. Naturally, both spoke their minds before coming to blows. Shane Douglas discussed the rich history the city of Pittsburgh has when it comes to producing some of the greatest World Heavyweight Champions of all time. Bruno Sammartino, Kurt Angle, and Douglas himself were prime examples of that, and “The Franchise” wasn’t going to sit back and watch Bubba the Bulldog run down the business, the legends, or the city he loves anymore. Bubba’s rebuttal consisted of the usual over-exaggerations, like his claims that he made Kurt Angle what he is today, which is not even close to accurate. Bubba’s continued disrespect for everyone and everything enraged Douglas who attacked Bubba before a bell even rang. Douglas wrestled with a newfound fire not seen in him in years, as it was clear he was on a mission to destroy Bubba once and for all. Shane Douglas controlled a large portion of that match, and finished Bubba with a submission, rather uncharacteristic of The Franchise.

Predictably, Jimmy Vega$ interfered, resulting in a 2-on-1 beatdown until, of all people, “Platinum” Mike Preston, who hasn’t appeared at an IWC show in over a year, came out of nowhere to save Douglas and even the odds. Turns out, Preston is the very first person ever to be trained by the Franchise, so Shane and his “Extreme IWC” concept have found another ally in Mike Preston.

Preston battled Jimmy Vega$ later that night in a match just signed after the above altercation. Preston looked very impressive, even at one point holding Vega$ above his head in a delayed suplex for several seconds. But Bubba the Bulldog wouldn’t let this newcomer make a name for himself through his partner-in-crime and interjected himself by delivering a vicious clothesline to referee Bruce Gray and causing a disqualification. Shane Douglas made the save, which resulted in a chaotic four-way brawl. IWC Security ran in and the entire locker room emptied trying to separate these men. They battled throughout the building, nearly destroying equipment in the process. After nearly two dozen people were finally able to separate them, The Franchise hit the ring and reminded everyone why he has the reputation he does, laying in scathing, obscenity-filled comments toward Bubba and challenging Bubba and Vega$ to a tag team encounter with Douglas and Preston in the near future. However, I doubt that a standard match with conventional rules could control these out-of-control egos.

Yet another personal rivalry is Shirley Doe and Sebastian Dark. Whether it’s something in these men’s past being rekindled, or Dark’s desire to destroy Doe once and for all is still in questions, but it’s clear these men can’t follow conventional rules either. Within a matter of minutes a chair came into play, the match was thrown out, and security had to intervene. This war is just getting started, it could be a long trail of blood loss and suffering before this score is settled.

Devil Bhudakahn and Glenn Spectre’s partnership hasn’t exactly been that of your average tag team champions. One minute they wrestle like the best team in the world, the next they’re arguing in the middle of the ring. Despite their lack of cohesion, they were able to defeat Matt Cross and Josh Prohibition once before, but tonight was a new day. Devil and Glenn stayed on the same page, but when they went for the win, they used the same method they did to defeat Matt and Josh before (Glenn holds Matt in a Gory Special while Jake Garrett splashes into him). However, Matt had it scouted and moved. Josh hit the Drunken Driver and Matt hit his breathtaking Shooting Star Press for the pin and, after over a year of hard work, Matt Cross and Josh Prohibition are your NEW IWC TAG TEAM CHAMPIONS!

Eric Xtasy and Jimmy Jacobs are two of the youngest and most promising stars in IWC, which explains why Shane Douglas hand-picked them to be part of the “Extreme IWC” movement he was discussing a few weeks ago. Tonight, this seemingly unlikely duo would have to join forces against two of the men the Franchise promised to “flush down the toilet”: Xtasy’s former best friends, JT Rodgers and Troy Lords. Unlike in previous matches, Rodgers showed no sign of backing down from fighting his former best friend of 12 years and all four men battled all over the building. It was a hard-fought match where debuting referee Bryce Remsburg found himself thrown into the middle, but when JT and Troy brought a steel chair into play when the referee wasn’t looking, they were able to finish their foes and score another cheap victory.

This trickery enraged promoter Norm Connors, who decided to punish Shelley by putting him in another match. His opponent: the returning Dirk Ciglar! Last seen in an IWC ring back in early 2001, Ciglar had been competing in the area for quite some time, but this was his first opportunity to be in a position as high-profile as he was now. He tried to make the most of it, wrestling a great technical contest with Shelley, a sharp contrast from the swerve Shelley just pulled over Hentai. Shelley ended up getting the win, but he needed a pull of the tights to help him. An impressive outing for both men, but Shelley goes 2-0 tonight, taking the easy way out both times.

Chris Sabin made his debut as well. The longest reigning NWA TNA X-Division champion in history went one-on-one with Fabulous. This is a rematch, as the two battled on the nationally televised “TNA Xplosion” program several weeks ago as well. Both men completely amazed the IWC live crowd with their effort and athleticism, to a point where many claim this to be IWC’s match of the night.. maybe even the year. Sabin’s high-impact offense, like “The Bum Rush,” a swinging backbreaker from the powerslam position, had the crowd in awe. Sabin’s finisher, The Cradle Shock, put away Fabulous and left the crowd craving more. Chris Sabin proved why he’s called “The Future” and why fans all around the world HAIL SABIN!

Sabin’s performance was so impressive, Norm Connors immediately made a match between Chris Sabin and THE PHENOMENAL AJ STYLES for our next TV taping on November 22 at the new IWC Arena.

Dean Radford, coming off of a tremendous effort against Colt Cabana, got back on the winning track with a huge win over another fast-rising star, Al B. Damm. Both men wrestled their hearts out, but Radford hit the Radicator out of nowhere and defeated Damm.

Carlton Kaz showed his partnership with Supreme Lee Great has its share of positives, as he defeated “The Dreamachine” Dustin Ardine. After the match, Kaz grabbed the microphone and berated Ardine for losing to him, since Kaz had been on somewhat of a losing streak. Ardine snapped and nailed Kaz with a superkick, showing a newfound aggressiveness. Is the pressure of stardom becoming too much for Ardine?