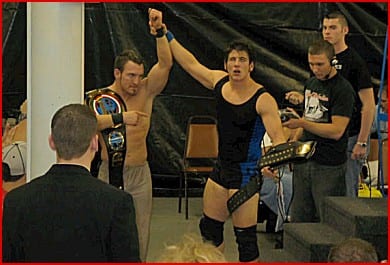 After being presented with the brand new IWC belt earlier in the night, Sterling James Keenan had a long night ahead of him. Dennis Gregory had wasted no time exercising the rematch clause in his contract and was now looking to become the first ever three-time IWC Champion. On top of that, promoter Norm Connors had made the ruling that if anyone were to interfere on Keenan’s behalf, he would lose the championship on a disqualification decision. Despite my personal disagreements with a lot of his prior actions, I will give the devil his due, so to speak.

Sterling James Keenan gave yet another impressive showing against the veteran Gregory. Although Gregory’s psychological mind games, such as leading the entire crowd in a chant of “Skinny Me” toward his opponent, seemed to get to Keenan throughout the match, Keenan waited patiently for that one little mistake, and he capitalized. Keenan found his opening and hit the “MK Ultra” for a sure victory, but Gregory somehow kicked out, becoming the first man in history to do so. Gregory’s comeback left Keenan in a state of shock. Keenan went back to what he knew best: trickery. While attempting to put his feet on the ropes for leverage for a pinfall, he was caught by referee Bruce Gray, but a second attempt proved fruitful and proved too much for Gray to detect, as Keenan retained his championship. Keenan’s “Unstoppable Uprising” continues.

Another continuing trend in the world of IWC is Bubba the Bulldog and his disrespect for everyone else in the locker room. With the muscle to his mouth, Jimmy Vega$ by his side, Bubba had the nerve to call himself a “star maker,” still taking credit for “making Kurt Angle what he is today,” which is not even close to the truth. When Bubba and Vega$’ opponents, “The Franchise” Shane Douglas and “Platinum” Mike Preston, emerged from the back, Bubba and Vega$ backed up, not just out of the ring but out of the building. Douglas got the mic and lit a fire under the crowd like only he can, causing Bubba and Vega$ to attempt to stall. Once they finally quieted things down a bit, Bubba was very selective as to when he would allow himself to be tagged in. It was clear Bubba wanted nothing to do with The Franchise, as he is the one man who can match him in ego, verbiage, and underhanded tricks. Bubba’s only in-ring action throughout most of the match occurred when Mike Preston was flat on his back. However, when Preston finally tagged in a red-hot Franchise, Bubba had no choice but to take him on. The match degenerated into chaos and a TABLE was brought into the ring. After several minutes of brawling, Bubba and Vega$ regained control and attempted to put Preston through the table. However, “Platinum” Mike was able to move out of harm’s way, causing Jimmy Vega$ to fall elbow first into the table and breaking it. After that and a belly-to-belly suplex from Douglas, Preston got the pin to score a measure of revenge for Bubba and Vega$’ disrespectful attitudes.

Probably the most interactive feature on IWCwrestling.com today is our Year End Awards for 2003 where you, the fans, vote for your favorites in what will eventually turn into 12 categories. One of those categories will be “Match of the Year” and this next match will likely be a favorite to win that category: “The Phenomenal” AJ Styles versus “The Future” Chris Sabin. Bar none the two fastest rising stars in all of professional wrestling today collided, and everyone could tell they were in for a treat. Neither man disappointed, wrestling a very even match. Almost a mirror image of each other, both men dug deep into their arsenal to pull out all they could to surprise the opposition. Both men went for their signature moves, Styles’ “Styles Clash” and Sabin’s ” Cradle Shock,” but both moves were countered. The ending to this epic came almost out of nowhere. As AJ went for a pin attempt, Sabin shifted his weight to where AJ’s shoulders were on the mat, and surprised him for a three count after a 15-minute war. In just his second appearance here, Chris Sabin has scored one of the biggest wins of his career anywhere. Sabin has plenty of momentum leading into Johnstown, PA on Friday night, December 12 when he takes on the debuting Sonjay Dutt, but this is the last thing AJ Styles wanted leading into his rematch with “Classic” Colt Cabana for the IWC Super Indy Title.

In the IWC Tag Team Title scene, “M-Dogg 20” Matt Cross had a choice to make: he needed a one-time replacement partner to substitute for the injured Josh Prohibition. The choice he would make was the last one anyone had expected. He said he would choose someone who has improved vastly in recent months, and he knew first-hand: and that man was Glenn Spectre! This nomination caused more bickering within the Devil’s Advocates camp until Spectre finally broke free from his partners and joined M-Dogg to defend the tag team titles. Now, with mastermind Jake Garrett as Devil Bhudakahn’s partner, the match began. Spectre was able to let out almost six months of pent-up frustration he had toward Bhudakahn and Garrett in a legal, productive way. Proving he is indeed the mastermind, Garrett was able to lead himself and Bhudakahn into battle strongly, breaking out classic double-team moves only executed by Bhudakahn and Spectre in the past. Despite that, Bhudakahn and Garrett were the first team to be eliminated after being pinned by the third team in this equation, Dunn & Marcos, also known as “The Ring Crew Express.” The match continued, with M-Dogg and Spectre somehow winning the match despite obviously never teaming before. M-Dogg hit a split-legged moonsault, driving all the wind out of the opposition to get the pinfall. M-Dogg and Spectre won the match, but what will become of Spectre once Josh Prohibition returns?

JT Rodgers and “Balls Hot” Troy Lords were probably not too happy to hear a rematch had been signed between them and the team of Eric Xtasy and “Barbaric Berzerker” Jimmy Jacobs. After Lords and Rodgers used a chair to win the previous match, Xtasy and The Berzerker had even more motivation, as if they needed it. As expected, the match went all over the building and was total chaos, far beyond the control of referee Christopher Kalikapela, much like the last match. Extasy was on his way to scoring a measure of revenge against his two former best friends, but yet another roadblock got into The Sexual Icon’s way, and that roadblock is named Alex Shelley. Shelley continued his desperate attempt at being noticed, apparently now aligning himself with Rodgers and Lords to help get the job done. Rodgers and Lords get the win, but a heavily tainted one to say the least.

The man-fish with the cult following, Shark Boy, finally made his long-awaited return to the Pittsburgh area. Considering a “We Want Shark Boy” chant erupted at WWE’s show at Mellon Arena last month, and Shark Boy wasn’t even in the building, it was only natural for him to make a return. His opponent was the returning AERO, a last-minute substitute for Fabulous, who suffered an injury the night before. Great back and forth match, but Shark Boy hit the DSD, the “Dead Sea Drop,” for the win, strengthening his legions of “fin followers” who came out in mass to give the “shark salute” to their hero.

The powerhouse Dean Radford continued to place himself back on an unstoppable win streak, this time vanquishing “Simply the Best” Carlton Kaz. Kaz, using the tutelage he’s received from Supreme Lee Great, did all he could, but Radford had too much power and too bad of a mean streak to compete with. After a “Radicator” out of nowhere, Radford obliterated another one.