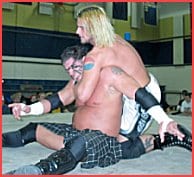 It was yet another eventful unforgettable night here in the International Wrestling Cartel as an explosive Aliquippa crowd welcomed all of the action and excitement.

One IWC superstar who can also be described as “explosive” as well as “unstoppable” is Sterling James Keenan, who continued on his huge wave of momentum as he went up against Dean Radford. Radford himself has had a huge upswing in momentum in recent months, especially considering he was the sole survivor in an eight-man elimination match last month and even had the strength to Radicate 300 pounds of Eric Xtasy. This match was the ultimate struggle of mind vs. muscle and Sterling’s resourcefulness allowed him to recruit some outside help — one of the most unlikely choices and the man Sterling defeated back in Johnstown, CM Punk tripped up Radford long enough for Sterling to capitalize and retain his championship. However, keep in mind the “No Tolerance” clause, stating Sterling has to continue to defend the championship without outside interference or he will lose the title. If CM Punk would’ve been detected by the referee, Sterling would have lost the title. Nonetheless, another successful defense for Sterling, but it wouldn’t be the last time we’d see him.

Back in 2003, CM Punk vs. Raven was the rivalry that captivated audiences of independent professional wrestling nationwide. Later that year, the two put aside their differences to form a successful alliance in the NWA TNA promotion. However, last December that all changed when Punk delivered a Conchairto to Raven, stabbing him in the back and costing Raven a chance at the NWA World Title. Raven hadn’t been seen or heard from since, so Punk demanded Raven show his face in Aliquippa and face Punk man-to-man. Raven did just that and what ensued was an all out war. Both men fought all over the building, up and down the stairs (and, in Punk’s case, tumbling down the stairs) and finally back in the ring. However, the encounter didn’t remain even for long as Sterling James Keenan made his way onto the scene and the referee was knocked down from a stray boot. Luckily for Raven, a still angered Dean Radford stormed the ring to avenge his loss, canceling out Sterling’s involvement, allowing Raven to hit The Raven Effect DDT to gain a measure of revenge on his one-time follower, full-time rival, CM Punk.

Jimmy Vega$ had thought he was wrestling “Platinum” Mike Preston, however none other than Jerry “The King” Lawler made his way to the ring with something to say to the muscle behind Bubba the Bulldog’s mouth. Lawler made it clear he regretted forming an alliance with the two back in Johnstown, and he wanted to challenge Vega$ to a match on that very night. The match was set, but not before Bubba came down to incite a double-team before “The Franchise” Shane Douglas showed up to help The King clean house.

When the match began, it was pretty obvious Lawler was trying to use mind games to beat the much larger, better-conditioned Vega$. Lawler made several remarks to get in Vega$’ head, which worked momentarily, but Vega$ was able to control quite a bit of the match, and defeat Lawler in his own style of match. Vega$’ offense only lasted until Lawler dropped the strap, meaning it was time for the big comeback. Lawler hit his trademark right hands and came full force at Vega$, and set him up for his trademark piledriver, the move very very few have ever kicked out of. Lawler went for the cover, but Vega$’ kicked out! A stunned Lawler picked up a dazed Vega$ and delivered a second piledriver, but Vega$ kicked out yet again! A shocked Lawler picked up a woozy Vega$ and dropped him with a third piledriver, BUT VEGA$ STILL KICKED OUT. Vega$ mustered the strength to get back to his feet, but by now he was out of it. Vega$ collapsed, Lawler got the cover and The King was victorious in a match that was probably a lot more difficult than he had anticipated.

Meanwhile, Vega$’ partner-in-crime, Bubba the Bulldog, didn’t have it any easier, as he battled “The Franchise” Shane Douglas. To counter-act Douglas’ valet, Miss Traci Brooks, Bubba brought someone he referred to as “Giant Brian,” however he was quickly disposed of my a low blow from Miss Traci. Bubba and Shane battled all over the building, and at one point almost outside of it. Shane was right at home as he tore into Bubba right in front of his Beaver County neighbors, making sure they had a great seat to watch Douglas destroy the man who’s run them all down for months. Bubba was able to get in a decent amount of offense, but nothing was ruining The Franchise’s Beaver County homecoming tonight. The Franchise applied his new submission specialty, The Full Nelson Stretch, and scored a second submission victory over Bubba with it.

The Shirley Doe/Sebastian Dark saga reached a new level of brutality in this Lumberjack Match with members of the IWC Security/Coalition of Competition serving as the Lumberjacks. Although a job of a lumberjack is to peacefully keep wrestlers inside the ring, one lumberjack in particular, Roman Law, went full force for Dark, having to be restrained by his fellow lumberjacks. Dark ruined Law’s debut by sneak-attacking him last October and Law will never forget about that. After a fairly impressive wrestling match, both men mutually agreed to end the wrestling and go for weapons. Then the match degenerated. Both men grabbed chairs and wiped out the entire force of lumberjacks. Then, after a little bit of dueling chairs, Doe walloped Dark with three sickening shots to the head to score a win, and leaving Dark requiring 21 staples in his head that night. However, at ringside was Pennsylvania State Athletic Commission representative Chris Wood, the same man responsible for Eric Xtasy’s current suspension. Wood left ringside very displeased by the brutality he had seen. Wood and IWC promoter Norm Connors engaged in a heated verbal confrontation as Wood stormed out of the building. Wood and Connors’ differences go back years, back before Wood was a member of the Athletic Commission and instead worked for Connors as a referee. It’s now clear why IWC has been singled out in this campaign against violence and brutality. Will Wood deliver more suspensions and continue his close watch over IWC events?

Hopewell High School marked the return of Josh Prohibition alongside tag team partner “M-Dogg 20” Matt Cross as they finally made their first official defense of the tag team titles together. Their opponents, however, were two men who knew Matt and Josh better than almost anybody: former XPW rival Shark Boy and Cross’ recent partner, Glenn Spectre. Matt and Josh wrestled a very smart match, and Josh’s ankle injury was seemingly a non-factor. However, based on their body language, they seemed to be a bit more confident than usual. After a phenomenal tag title match, Cross and Prohibition defeated Spectre and the ultra-popular Shark Boy. Is the success of Matt and Josh’s unbelievably popular DVD, “A Passion for Pain,” available in stores everywhere, now going to their head?

At Hopewell High School several banners hung proclaiming it “The Home of the Vikings.” If that’s the case, “The Barbaric Berzerker” Jimmy Jacobs must’ve fit right in as he entered his Three-Way Dance against “The Future” Chris Sabin and one half of the NWA World Tag Team Champions, the debuting Joe E. Legend. Legend and Sabin started the match double-teaming Jacobs, but as in all three-way matches, things didn’t take long to go the route of every man for himself. After a tremendous battle and outstanding outing between the three, Sabin hit Jacobs with The Cradle Shock to win the match and keep his IWC undefeated streak intact.

Mickey Gambino made his much anticipated debut, facing “Balls Hot” Troy Lords. Gambino and Lords have had issues before, stemming back from Gambino’s days on IWC Security. Gambino had been instructed to remove Lords from the ring, but a brief physical altercation ensued that couldn’t be solved until now. Gambino wrestled with the heart of a champion, and put on an outstanding effort, but it just wasn’t enough to counteract to resourcefulness of Troy Lords. “Balls Hot” gets the win, but it was anything but easy.