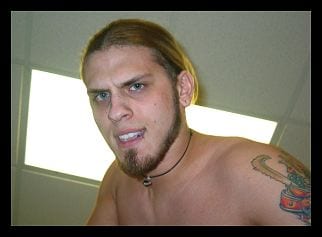 STERLING TO TURKEYTOWN FANS:
“STUFF IT!”

While on the subject of Sterling’s partner-in-crime CM Punk, Punk had a match that night against Dean Radford, ironically the same man Punk cheated out of the championship back in Aliquippa several weeks ago. Radford hadn’t forgotten about exactly who it was responsible for him coming up short in that title match. Before the match, Punk seemed more concerned over forcing the fans to throw out their cigarettes and beer before he wrestled than he was with his opponent, and he paid for it. Radford continued his reputation of hitting The Radicator out of nowhere, as that’s just what he did, catching Punk completely off guard. Dean Radford pinned CM Punk for the three count, thus earning himself one final chance at IWC Heavyweight champion Sterling James Keenan on March 20.

Based on their recent differences, it was no surprise that Shirley Doe and Sebastian Dark eliminated each other simultaneously from the battle royal, meaning they would once again have to face each other. However, moments in the contest, quasi-renowned referee Bruce Gray counted both men out when the action spilled to the arena floor. However, promoter Norm Connors made the observation that Chris Wood of the Athletic Commission was NOT in attendance that night, therefore this match was now a No-DQ Falls Count Anywhere Match to finally settle these issues. Both men bludgeoned each other with chairs, not surprisingly resulting in Sebastian Dark being busted open once again. Semi-distinguished referee Bruce Gray became involved as well, first as an inadvertent steppingstone to Doe’s shining wizard, then Dark threatened bodily harm if he didn’t help him set up a table on the outside. That table came back to haunt Dark, as Doe regained the advantage and hit the Sillyhead 2 off of the apron and through the table! Doe fell on top of Dark, got the three count, and celebrated victory as a bloody and injured Dark was assisted to the back.

The two biggest egos in IWC had interesting tests ahead of them. For Vega$ it was former NWA World Tag Team champion Joe E. Legend, making just his second appearance here in an IWC ring. The hatred fans have for Vega$ propelled Legend into the role of crowd favorite, something he is not at all accustomed to. Both men battled back and forth, countering each other’s finishers, Vega$’ Cha-Ching Slam and Legend’s Stone Cutter, many times. Legend attempted a sharpshooter to try to finish off Vega$ but the muscle behind Vega$’ mouth was able to power out of it and score a tained win the his feet on the ropes.

As for Bubba the Bulldog, the man who claimed he would win the battle royal was tossed out first, much to his dismay. Bubba then had to attempt to take out his frustrations on the ultra-tough former pit fighter, “Mastermind” Jake Garrett. The fans’ extreme loathing for Bubba caused them to rally behind Garrett in a major way, reacting very favorably whenever any pain was brought to Bubba’s person. Despite the shocking amount of fan adulation, Jake fell victim to the Bulldog Drop and was pinned for the three count.

Two other current rivals who eliminated each other simultaneously were “Balls Hot” Troy Lords and Glenn Spectre. Spectre defeated Lords last week to earn a spot in Super Indy 3 on April 17, and now Lords was looking for revenge. Lords brought all he had, even kicking out of the Spectre Bomb, but Spectre was able to polish “Balls Hot” off with a modified powerslam to continue his impressive win streak.

The debuting Brock Singleton had a wild battle with the legendary veteran T. Rantula. Everything from T’s infamous street sign, to Brock’s manager Sasha, to a tray of nachos came into play in this war. Brock showed very impressive strength, not only picking him up for a body slam, but also backdropping him and elevating him over his shoulders for a Death Valley Driver. However, when the battle spilled to the outside it was Brock’s valet Sasha that made the difference, holding on to T’s legs while Brock re-entered the ring. Thanks to T’s large frame and mass confusion that had erupted, referee Christopher Kalikapela was oblivious to the infraction and gave the decision to Brock Singleton via countout.