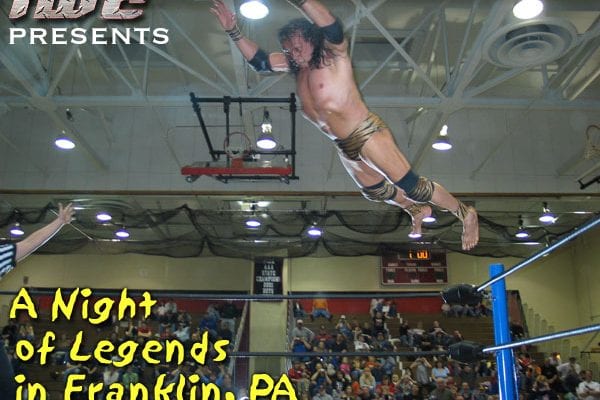 A new IWC indoor attendance record of 1200 was set as Fans young and old showed their admiration and support to wrestling’’s biggest stars of the past, present, and future for a very special evening of nostalgia, excitement, and unpredictability.

There were several great stories to surface out of this event, one of which being the incredible guts & determination of Dean Radford. A neck injury kept Radford from making a scheduled title defense, but Sterling James Keenan, despite already having a match, refused to leave the ring until he received an impromptu championship match with Radford. After some choice words for both Radford and for promoter Norm Connors, Connors finally sanctioned the match and it was under way. Sterling had planned on avenging what he felt was an unfair championship loss in his match with Radford, which saw Connors run in in place of both referees, who had been knocked out, to make the 3 count on Sterling’s shoulders, and name Radford the new IWC Champion. However, Dean knew the dangers of stepping into the ring with a man like Sterling, especially with a damaged neck. Dean wasted no time Radicating Sterling for a surprisingly quick victory. A frustrated Sterling was forced to regroup after another ego-damaging loss.

The night of action culminated with a 17 man “Franklin Rumble”. 2 men would start in the match, and every 60 seconds a new competitor would enter the fray. Elimination occurred when a wrestler was thrown over the top rope and both feet hit the floor. It all came down to the luck of the random drawing held earlier, and the two men that got the raw deal were Glenn Spectre & Troy Lords. Considering their recent heated past, Spectre & Lords had no problems battling it out for a minute before #3 entered, the debuting Jimmy DeeeLicious (all right!). Jimmy DeeeLicious (all right!) didn’t do so well in his first IWC outing, getting tossed before #4 even entered, that being Kamala’s handler, Kimchee. Kimchee stalled until #5 made his way down, unfortunately for Kimchee, that man was Lord Zoltan. Zoltan chased Kimchee clear out of the building, thus causing an automatic disqualification to both men for their refusal to enter the ring. Spectre & Lords still battled it out in the ring, but they were about to be joined by a lot more company.

x At this point Gregory & Feelgood’’s alliance was proving very effective, as they were the only 2 men left inside. The mammoth T. Rantula entered at #15, meaning all 3 of these allegedly disrespected athletes could get a full sixty seconds of time to gloat and harass the fans and anyone else they saw fit. Dirk Ciglar entered at #16, and somehow survived the 3-on-1 assault for the full minute until the 17th and final entrant, The Patriot came to the ring.Unfortunately, Ciglar didn’’t last much longer, as he was eliminated leaving the former WWF & WCW star at 3-on-1 odds. Feelgood & T punished The Patriot as Gregory jawed with the crowd. All of a sudden, from behind, Franklin High School Resource Officer Deon Balunka (more on him later) humiliated Gregory one final time by catching him off-balance and throwing him out. Another one bit the dust moments later when T Rantula turned on Feelgood and eliminated him. T took his eye off the ball, however, and when he turned around he was met with a Patriot clothesline sending him over the top and to the floor, as The Patriot scores an inspirational victory.

The legends matches of the evening were quite a spectacle. After all the many years, the epic battles, the memorable moments we’ve all grown up watching these legends involved in, some of the biggest & best were brought back for one more memorable night.

x”Superfly” Jimmy Snuka had never before wrestled Kamala, giving this night another reason of historical significance. Kamala was escorted to the ring by his handler Kimchee and Mayor Mystery (the alleged mayor of Parts Unknown, reportedly trying to lure Kamala from Uganda into residing in Parts Unknown). Not surprisingly, Kamala & company resorted to cheap tactics, distracting the official & choking the original phenom Snuka in the ring ropes. Kamala splashed the prone Snuka after several minutes of chopping & choking. However, the very simple-minded Kamala attempted to cover Snuka on his stomach, unaware that he had to turn the Superfly on to his back. Kimchee & Mystery pleaded with Kamala to turn Snuka over, but the primitive Kamala couldn’t understand. Kimchee entered the ring with his riding crop, attempted to hit Snuka, but a miscue occurred and he nailed the Ugandan Giant himself. Kamala, perhaps not fully understanding what had just happened, rebelled against his trainer, and attacking both he & Mystery. Snuka saw the opportunity and scaled to the top rope and performed the move that made him a legend, the famous Superfly Splash, onto Mystery, still with the same poise & grace as always, even after all these years. At a loss of what exactly to do, referee Christopher Kalikapela counted a Snuka pinfall on Mystery and declared Snuka the winner. Snuka & Kamala shook hands in a showing of respect, a fitting gesture between two men so widely respected everywhere they go.

In another legends match, one half of arguably the best tag team of the 1980s, Demolition Ax stepped into the ring with Virgil, or more accurately Vincent, as he was complete with nWo entrance music, flag, and t-shirt. Ax used his power to ground Virgil but Virgil ended up using his brains to win the match. During a brawl on the outside, Virgil was able to enter the ring just before the count of 10, Ax wasn’t lucky enough to make it, and Virgil wins the match.

In yet another legends match, local legend Lord Zoltan put Kamala’s handler Kimchee in his place once and for all. Kimchee spent several minutes stalling, and yelling to the fans in his native tongue. But he was just delaying the inevitable. Zoltan vanquished Kimchee and manager Mayor Mystery to win the match.

Our other legends match, a Flag Match between The Patriot & Nikolai Volkoff, never got underway thanks to the interruption of Dennis Gregory, who still feels disrespected in a big way thanks to IWC officials leaving him off of a few recent live events. Gregory commandeered the mic and mentioned that Patriot & Volkoff were actually on good terms, and Volkoff had actually been living in the United States for quite some time now, and was loving it. Gregory, alongside T. Rantula and Dr. Feelgood, two other men who feel slighted by IWC officials and three men who had dubbed themselves “The Independent Legends” challenged Patriot & Volkoff to a six-man tag match if they could find a partner. The problem was, there were no wrestlers left that didn’t already have a match, so Patriot & Volkoff made a bold, risky decision, and chose Franklin High School Resource Officer Dion Balunka, accompanied by the high school principal and coach. Balunka held his own with Gregory and didn’t seem very much out of place, despite an extreme lack of experience. A miscommunication with a foreign object resulted in Balunka scoring a surprise pin over T. Rantula for the 3 count. Balunka & his Franklin High School friends could celebrate, as could Nikolai & The Patriot, but this won’t do anything to help Gregory’’s quest for respect.

In other action, the night started off xwith a thrilling encounter between “Balls Hot” Troy Lords and Dirk Ciglar. Both men wrestled a spirited match, setting the tone for the night to come. With so many fans watching and so many important individuals looking on from the back, both men gave it their all to come out on top. After several minutes of great competition, Ciglar scaled the ropes and hit a modified Swanton Bomb to put away Lords.

xGlenn Spectre, in continued preparation for not only Super Indy 3 on April 17, but for his tour of Japan at the end of the month, took on the debuting Roman Law, who has apparently been spending time at the Cobra Kai dojo. Roman bombarded Spectre with his signature moves, including his No Mercy enziguri kick as well as his Cobra Kai Clutch submission hold, but Spectre had a submission move of his own from his extensive repertoire or mat work. This time it was an STF forcing Roman Law to tap out. An admirable first match by Roman Law, but Spectre’s momentum is too strong to break.