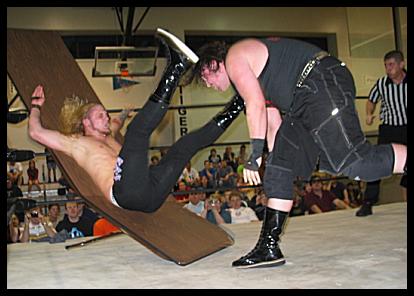 Another electric crowd filled up the CCAC South Campus in West Mifflin, PA for another night that will not soon be forgotten for so many special reasons.

The feud between Sterling James Keenan and Dean Radford over the IWC Championship has done nothing but escalate in recent weeks. It’s clear that Keenan thrives on being the champion, he craves it, he needs it, he is addicted to the feeling and the prestige of being the IWC champion, and it’s pretty evident he’ll stop at nothing to be back atop the mountain. It was this mindset that brought these two together for a Table Match. Sterling proved his superior intelligence by focusing on Dean’s already injured neck throughout the match, and also by having CM Punk at ringside to exploit the no-disqualification rule of all table matches.

After several minutes of blatant double-teaming, the odds were about to be evened as Dean’s friend Eric Xtasy stormed the ring and got rid of Punk, leaving things one-on-one. That distraction paid off, as Dean was able to have time to position a table in the corner, and hiptoss a stunned Sterling through it for the victory. Radford remains the IWC Champion but what toll did that take on his already weakened neck?

Speaking of injuries, when ring announcer Chuck Roberts uttered the words “Ladies and gentlemen, please welcome The New Triple Threat!” the crowd erupted at the thought of hometown hero “The Franchise” Shane Douglas making his IWC return after being missing for several weeks after an alleged attack from Bubba the Bulldog and company. However, instead of Michael Shane, Chris Candido, and The Franchise, Chuck Roberts was forced to announce “Michael Lame,” played by Dennis Gregory, “Chris Shamdido,” played by Jimmy Vega$, as well as “Lame Douglas” played by Bubba. The three men did a less-than-flattering impersonation of the real New Triple Threat until they finally issued an open challenge to anyone in the back. Proving that they have more enemies backstage than anyone, a makeshift team was formed to take them on, the team of “Barbaric Berzerker” Jimmy Jacobs (who had already wrestled earlier in the night), Dirk Ciglar, and the returning “Platinum” Mike Preston. Preston had stood by Shane Douglas through many battles with Bubba and Vega$ last year until he and Douglas had a bit of a falling out last January. This was Preston’s chance to redeem himself, and he did fairly well at that considering he had no time to prepare. The smaller and more tired Jacobs was isolated from his corner, oftentimes trapped in the ring with the largest man in the match, Vega$. However, Preston and Ciglar were able to intervene and turn the match into downright pandemonium, giving Gregroy, Vega$, and Bubba a tougher fight than they may have expected. After the match had degenerated into chaos, Bubba was able to sneak in and hit his Bulldog Drop to finish the match. But after the match, the action would continue.

Bubba began to gloat about ruining the show by causing a delay in New Jack’s flight, thus forcing the scheduled Bubba vs. New Jack match into not happening. Promoter Norm Connors stormed into the ring to begin a very heated argument. Connors made the point that Bubba hadn’t ruined the show since there were still so many great athletes giving it their all throughout the night, and because Connors had put some of his own money into flying New Jack in to make sure he would be here for the show later that night. However, Bubba chose to exercise a clause in his contract stating he has permission to leave shows early and, in this case, that would mean he would be backing out of his obligation to wrestle New Jack.

Just when it seemed Connors would utter the famous words “You’re fired!” at Bubba, Bubba nailed Connors with a right hand before he could even finish his sentence. xThat one punch made Connors rethink his decision, and instead a historic match was made for when IWC returns to CCAC South Campus on Saturday night, June 5. It will be the would-be Triple Threat of Bubba the Bulldog, Jimmy Vega$, and Dennis Gregory in a six-man tag match against the real New Triple Threat of Shane Douglas, Michael Shane, and Chris Candido in the first-ever IWC STEEL CAGE MATCH!!!

But where does all this leave New Jack? The Original Gangsta arrived late in the evening and was obviously not happy. New Jack ordered that Connors find him an opponent or he would attack Norm Connors himself. As New Jack confronted the promoter, the mammoth T. Rantula appeared out of nowhere, and the bell was sounded. T. Rantula had been aligned with Bubba in the past, and with Dennis Gregory in the very recent past, so it seems as if Bubba sent T to eliminate one of his many enemies right now, so he could keep his focus on Douglas, Shane, and Candido.

Both New Jack and T Rantula were busted open early and often in the match thanks to such weapons as a fork, a trash can lid, and a sickle. Both men made their way to the merchandise area, where New Jack used his chain to tie T on top of one of the tables. With T Rantula unable to move, New Jack began to climb up to the ledge of the CCAC South Campus, about 20 feet off the ground. New Jack dove off with an elbow drop onto T and pinned him right there for a three count. New Jack has made his mark, and you have to believe New Jack still has his sights set on Bubba the Bulldog. New Jack won’t rest until he makes Bubba bleed.

Not surprisingly, “Match of the Night” honors had to go to the Super Indy Title match between defending champion “The Phenomenal” AJ Styles and the debuting challenger, “The Notorious 187” Homicide. The opening several minutes of this match were dead even. Both men went back and forth but neither could get any sort of advantage whatsoever. Things started to open up a little, with more hard hitting and high impact moves and still they were hanging with one another equally, and oftentimes countering each other’s signature moves. Several more minutes of classic action passed and, with referee Bruce Gray expertly calling it right down the middle, the physical toll these men were giving each other was starting to show.x

The competitiveness in this match was perhaps more intense than any other match in recent memory. After a long and exciting encounter that had fans on the edge of their seats, if not standing, the whole time, AJ finally maneuvered his way into hitting The Styles Clash. Styles somehow found the energy to pin Homicide but, much to the shock of everyone in attendance, HOMICIDE KICKED OUT, making him the first man in IWC history to escape The Styles Clash. A shocked Styles found himself unprepared for one of the few times in his career, as The Styles Clash had been an inescapable sign of defeat in the IWC. Homicide somehow found the energy to hit HIS signature maneuver, “The Cop Killa,” which has to be seen to be believed. Homicide got the cover, but AJ KICKED OUT. Both men kept going back and forth, until finally AJ reversed a Homocide pin attempt into one of his own, and had enough leverage to hold him down for three. An amazing match between two amazing athletes. AJ left the ring exhausted, yet victorious, as the fans chanted for a rematch somewhere down the road.

After the impact they made during their debut last month, it was inevitable that Tracy Smothers and Chris Hamrick get a shot at IWC Tag Team Champions “M-Dogg 20” Matt Cross and Josh Prohibition. Complete with matching Oriental headbands, it was clear that Matt and Josh were already looking forward to their upcoming tour of Japan starting on April 29. However, looking past Southern Comfort, who have combined for four decades of in-ring experience, would be a mistake, especially considering these men’s pasts. Last year in Beaver county, when Matt and Josh defended the now-defunct XPW Tag Titles against Smothers and Hamrick, the match was so intense and out-of-hand, the ring was broken just two minutes into the contest. A contest that ended with Matt and Josh retaining those titles, and Hamrick piledriving Matt through a table.

Now, 13 months later, both men still hadn’t forgotten about that chaotic night. Although IWC’s ring was able to stay in one piece, the match was still just as crazy as 13 months ago, as referee Bryce Remsburg was knocked down and out inadvertently when he attempted to restore order. Chris Hamrick hit the Dixie Driver and went for a cover, but the official was still incapacitated. The champions recovered, and Josh hit the Drunken Driver, but still no official. Josh grabbed Remsburg’s hand and slapped the mat three times himself, which counted as an official victory. Matt and Josh escape with some postivie momentum for their upcoming tour of Big Japan, as well as with the tag titles, but just barely and just for now, as the fans again were demanding a rematch after these events.

Another wild encounter was between CM Punk and Shirley Doe, another war that went all over the building. Thankfully, Punk did not have Sterling James Keenan by his side as Sterling had Punk for his match, but Doe would have other problems to worry about. None other than Sebastian Dark made his return to re-ignite his feud with Doe. Dark’s distraction caused Punk to capitalize and defeat Doe after a very hard-fought battle. However, Dark still wasn’t satisfied. Dark threatened to break every bone in referee Bryce Remsburg’s body if he didn’t start a match between Dark and Doe right now. Remsburg had no choice but to sound for the bell, allowing Dark to hit a move he calls “The Napalm Evisceration of Death” twice for a quick and easy victory. The Doe and Dark rivalry is heating up once again.

The upstart team of “Fabulous” John McChesney and “Barbaric Berzerker” Jimmy Jacobs have seemingly decided to become a regular duo in hopes of building off of their unbelievable effort against Southern Comfort last month. This time, they faced another team with a lot of experience together, Dunn & Marcos: The Ring Crew Express. Both teams started out trading unusual mannerisms, the RCE’s “air guitars” versus Jacobs’ “HUSS w/hand gesture,” but things got serious before long. Dunn & Marcos brought a very aggressive, more serious approach later in the match, seemingly tired of being the runners-up here in the IWC, and finally starting to more seriously pursue tag team victories and championship opportunities. However, Jacobs and Fabulous just had too much fight for them, as McChesney’s second-rope TKO put away the RCE and put Jimmy Jacobs and “Fabulous” John McChesney on the winning track.

The Troy Lords/Glenn Spectre series continued and this match was more intense than ever. Both men laid into each other with stiff shots and heavy blows, enough to draw blood from the nose of Spectre. Lords showed a lot more focus than usual, and Spectre was more determined than ever, trying to put his problems with Lords behind him once and for all. After several minutes of brutal action, Spectre hit a Northern Lights Bomb to pin Lords and score the victory.

All of this competitiveness and aggression all leads to Friday, May 7 at Hindman Hall in Butler, and to Saturday, May 8 back at CCAC South Campus in West Mifflin, as 12 of the greatest stars in the world come together to crown the best of the best: IT’S SUPER INDY 3!