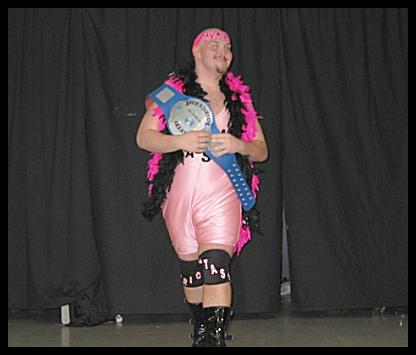 A TUMULTUOUS NIGHT IN TURKEYTOWN

Fresh off the historic night that was Super Indy 3, the IWC elite were back at it again, for another memorable night of action.

The scheduled main event saw the new IWC Heavyweight Champion Eric Xtasy defend against Shirley Doe, just returning this past week from his extensive tour of Japan. Xtasy wasted little time cementing his newfound attitude, infuriating the fans with disrespectful and oftentimes controversial remarks. When the match got underway, Doe was wrestling with even more aggression and intensity than usual, obviously motivated by not only the recent Japan trip, but also by the fact this was his first IWC Heavyweight Title shot in nearly two years.

Unfortunately in the midst of the action, referee Bruce Gray was incapacitated not once but twice. One of Doe’s recent adversaries, Sterling James Keenan — with Japanese wrestling sensation Soldier not far behind — used this as an opportunity to attempt to ruin Doe’s chances once and for all. With Bruce Gray still hurt, a second referee, CJ Sensation, emerged to finish the match, and despite the outnumbered odds, Doe was able to pin Xtasy for a three count to make him the NEW IWC Heavyweight Champion — or so we thought. Head referee Bruce Gray had regained enough composure to notice the blatant 3-on-1 triple-teaming and overruled Sensation’s decision, declaring Doe the winner, but via disqualification, meaning Xtasy retained his title. The 3-on-1 attack continued until Super Hentai and Dirk Ciglar made the save, setting up an impromptu six man tag team war.

The other half of the double main event saw a special appearance from not only a former three-time WWF Tag Team Champion, but the man who co-holds the record for longest WWF Tag Title reign ever, at 16 months, Demolition Ax. Ax’s opponent was Dennis Gregory, the same man who proclaims himself an “Indy Legend” and has gone as far as publicly denouncing the likes of Nikolai Volkoff and The Patriot back at our “Night of Legends” just to get his point across. Gregory was as egotistical and insulting as ever, comparing a legend such as Ax to his grandfather. Ax would have his revenge, as he would outpower Gregory through most of the match, all the while using his years of experience to the advantage. Ax would break out every dirty trick in the book: from raking eyes, to using a chair, and even biting, all the while asking referee Bryce Remsburg if they were legal. Eventually, Gregory caught on and fought back, but he seemed to be trying to beat Ax at Ax’s own game by using more brawling tactics than technical. That oversight cost the “Indy Legend” his match to Ax, as Ax battled right back with the powerful offense and pinned Gregory for a surprise victory. A stunned and upset Gregory took out his frustrations in the form of an uncalled-for superkick to Remsburg as he left the ring.

Sterling and Soldier were also a force to be reckoned with when Sterling went one-on-one with Dirk Ciglar. Ciglar put forth arguably the best performance of his IWC career, having full control over the former IWC Champion throughout a large portion of the match. Ciglar’s downfall came with Soldier’s distraction of not on the referee, but Ciglar himself. As Ciglar began to ascend to the top rope to presumably finish Sterling with his Swanton bomb, Soldier climbed the ropes on the opposite side of the ring. As the referee admonished Soldier, Sterling crotched Ciglar and hit the MK Ultra to finish him off.

As was announced on this website just days ago, Al B. Damm and “Simply the Best” Carlton Kaz made their returns to IWC, not as rivals, but as partners. Both men virtually made each other famous through their memorable feuds with each other spanning numerous states and promotions, including four memorable battles with each other right here in IWC in 2003. This time they were partners, and although they obviously knew each other well, their tag team continuity had to have been in question. It was at least until their match started, as they matched “Barbaric Berzerker” Jimmy Jacobs and “Fabulous” John McChesney move for move. The match was great back-and-forth action, with Jacobs and Fabulous seemingly having the crowd on their side through the majority of the contest. Considering the major competition Jacobs and McChesney have faced and how quickly they’ve gelled together, it was a major accomplishment for Damm and Kaz to not only keep up with them, but score the win with a double-team wheelbarrow neckbreaker.

Glenn Spectre, fresh off not only his tour of Japan, but a tough Super Indy Tournament match-up against the eventual winner Chris Sabin, took on the debuting Gavin Starr. Spectre seemed to have not been in the best of moods on this night, and he took it out on Starr in grand fashion. Starr attempted an aerial attack to use his quickness to counteract Spectre’s mat presence but it had only limited effect. Spectre controlled much of the match, thanks in part to his seemingly edgier approach, before finishing his foe off with the Northern Lights Bomb to score a very convincing win. Interestingly enough, IWC Champion Eric Xtasy watched a majority of the match from the entrance area quite intently. Is Xtasy scouting potential future title challengers or does he have other intentions?

The T. Rantula/Brock Singleton saga continued in another outrageous hard-to-control brawl. Both men battled in and out of the ring, paying no attention to any rules and regulations. T. even gave Brock a face full of nachos at one point. The match wasn’t very pretty, but it was definitely very physical and intense. T. Rantula ended up on the upper hand, and after two chokeslams, it appeared Brock was done. However, Brock’s valet, Sasha, distracted T., enabling Brock to snatch T’s street sign, bash him in the head with the referee distracted, and score the pin. An enraged T. Rantula issued the challenge to Brock for IWC’s return to Turkeytown on Saturday night, July 17, and it will be FANS BRING THE WEAPONS!

T. was involved in IWC’s first Fans Bring the Weapons Match, a battle that set the tone for all future hardcore wars in IWC, there’s no telling what kind of brutality will be seen when these two meet one final time on July 17.