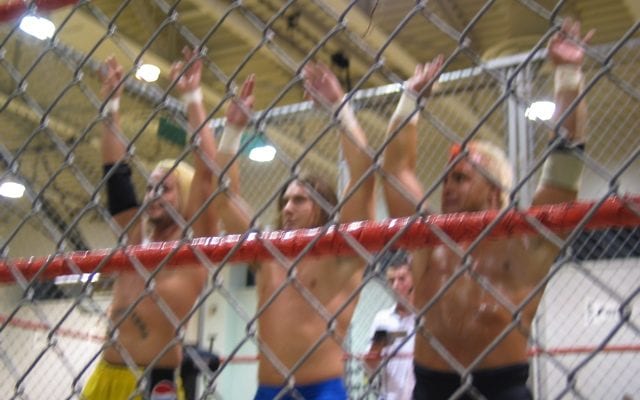 The largest CCAC South Campus crowd in IWC history overflowed the building for the opportunity to see Michael Shane’s New Triple Threat battle Bubba the Bulldog’s Self-Proclaimed Triple Threat in IWC’s first ever “War Games” Steel Cage Match, and it did not
disappoint. Circumstances leading up to this match were almost as chaotic as the action in the match itself. Bam Bam Bigelow, the scheduled third member of the New Triple Threat team, was involved in a car accident on his way to the show, leaving Michael Shane & Chris Candido without a third partner. Only time would tell if someone would dare volunteer for this dangerous match.

War Games rules are as follows: one member from each time start the match. After equally timed intervals, the rest of the participants enter one-by-one. The team that gets to send in a member first is determined by a coin toss held backstage. After all members have entered, the match can only end by submission or surrender.

Jimmy Vega$ and Chris Candido were the first combatants, and Candido seemed to take control early throughout most of this segment of the match. However, when time expired Dennis Gregory was the next to enter the match, meaning that team had obviously won the backstage coin toss. Candido tried to battle back but the strength in numbers proved to be too much for him. Candido held on best he could until the next interval expired and Michael Shane emerged from the curtain to assist Candido. Although Michael Shane had a falling out with Shane Douglas, Shane still contained the same hatred for Bubba’s counterparts that Douglas did and does, and Shane showed it by immediately swaying the momentum of the match to his & Candido’s favor. The New Triple Threat had full control when Bubba came down as the 3rd and final member of his team, and slowly Bubba’s self-proclaimed Triple Threat used the 3-on-2 advantage to regain control and bust open Candido in the process. The mystery now was: Was there somebody backstage who had enough hatred for Bubba and company to risk their well-being in a match this dangerous?

As time ran out, a 3rd man’s music did play and the building erupted when promoter Norm Connors himself volunteered his services as the 3rd partner. However, before Connors could even make it to the ring, Bubba slammed the cage door on his head, knocking him out. The 3-on-2 disadvantage continued until another man’s music played, this time the music belonged to CM Punk who shocked everyone in attendance by volunteering his services into the match, immediately causing the momentum to switch again. Bubba & friends hadn’t prepared for Punk and they paid for it. All 3 Self-Proclaimed Triple Threat members were knocked down and taken out by a Chris Candido top-rope headbutt, a picture-perfect top-rope elbowdrop by Michael Shane and an even more breathtaking elbow drop by CM Punk: as he dove from the very TOP OF THE CAGE, crashing down onto a prone Bubba. Punk slapped on a submission hold, and Bubba surrendered not long thereafter. Finally after months of aggravating us all, Bubba has finally been shut up, but things are far from over.

Bubba still has a score to settle with Norm Connors after Bubba attacked Connors back at “A Gangsta’s Retribution” last April, and slammed the cage door into Connors’ head during the cage match. Connors made a very bold challenge to Bubba: Hair vs. Hair Match. Bubba will have a mystery opponent July 2 at the Big Butler Fair. If the mystery opponent wins, Bubba loses his hair. However, if Bubba wins, Norm Connors loses his hair. Either way, someone leaves Butler humiliated and scarred for life.

From the blood & carnage of War Games to something completely different: Eric Xtasy teaming with Sebastian Dark to face Shirley Doe & Glenn Spectre, which turned out to be the two oddest teams in IWC history. Doe & Dark, still banned from wrestling each other in one-on-one matches in Pennsylvania thanks to Chris Wood of The Commission, couldn’t wait to get their hands on each other. Eric Xtasy & Glenn Spectre were another story. While Dark and Doe bludgeoned everyone in their path, whenever Xtasy & Spectre came face-to-face their behavior was to say the least bizarre, controversial and uncomfortable to watch. A series of questionable go-behinds followed by an exchange of butt slaps proved that some unexplainable change had gone through Glenn Spectre while he was touring Japan. As the violence and sickening thuds between Doe & Dark escalated, it seemed Xtasy & Spectre’s sexual tension escalated as well. Just as Xtasy & Spectre prepared for the unthinkable, closing in on each other with lips puckered, Doe got tired of the nonsense and stopped the proceedings with an old-fashioned double noggin-knocker. Doe’s attentions turned to Xtasy, as Doe hit a variation of his Sillyhead 2 move and attempted to pin Xtasy, but Spectre saved Xtasy even though Spectre walked into this match teaming with Doe. Spectre helped Xtasy to the back, to do what I don’t want to know. Spectre’s new attitude seems to have spawned a partnership of sorts with Xtasy and it’s downright scary to think of what could happen next between those two.

Meanwhile, the match continued in the ring with Doe vs. Dark. Dark retrieved a steel chair and obliterated Doe with four of the sickest chair shots he’s ever delivered, and based on what these two men have done to each other that’s saying a lot. Dark finished Doe with the DNR (Do Not Resuscitate) to pin Doe for the 3 count, giving Sebastian Dark, and technically Xtasy, a victory,

Glenn Spectre isn’t the only one that went through a drastic change, as CM Punk officially severed his ties with Sterling James Keenan. Rumors of frustration & tension between these two that started after Sterling lost his IWC Title have been proven true and even more true than we had thought. Punk couldn’t defeat Chris Sabin in the quarterfinals of Super Indy 3 with Sterling in his corner, so on this night he’d try to do it without him. Punk controlled a majority of the match, wearing down Sabin quite significantly, but Sabin bounced back constantly, refusing to die. Sabin changed the momentum with his patented jumping enziguri kick, the same move he used to switch momentum in all three of his Super Indy tournament matches. Sabin started battling back and proved too much for Punk. After several attempts at a counter, Sabin finally hit The Cradle Shock for the win, remaining not only the Super Indy Champion, but also remaining unbeaten in IWC rings. Sabin got the win, but as you’ve read, Punk would return to redeem himself and win over everyone’s respect in the main event.

This show saw several debuts, which we’ll get into momentarily, but sadly it was also the night of a departure, as Soldier made his final United States wrestling appearance. Ironically, Soldier’s last match was in response to an open challenge from Sterling James Keenan, who’s felt increasingly frustrated, especially now that he’s lost the IWC Title and his partner-in-crime CM Punk. Sterling ran down Soldier before the match even started, claiming Soldier didn’t belong here. Sterling then demanded Soldier take his coat for him, just as Sterling did when the two teamed together several weeks ago. However, this time Soldier wouldn’t be as subservient and the match started in a hurry. Soldier had the record-crowd on their feet chanting and cheering for him, a sharp contrast to his debut here just 3 short months ago. Sterling was clearly taken aback by the fire inside Soldier’s and the reaction from the fans, as Soldier controlled most of the match. Sterling was able to survive Soldier’s Michinoku Driver just barely with a foot on the ropes, but moments later Sterling wasn’t so lucky to find a rope as Soldier pinned him cleanly for the 3 count. More mounting frustrations for Sterling, but a perfect ending to his United States tour. The moment got even better as several members of the IWC locker room surrounded ringside as fans flooded the ring with streamers, chanting “Please Come Back” and “Thank You Soldier”. Promoter Norm Connors entered the ring to thank Soldier and offered Soldier the chance to be IWC’s officials representative in Japan presented him with the newly-created IWC International Title. Soldier delivered a brief speech, proclaiming his love of the United States and promising he will be back at some point. The fans erupted and continued to chant as Soldier made his way up the entrance area and behind the curtain for the final time.

Several individuals made their IWC debuts on this show, the first of which was Jimmy Rave, who’s made a name for himself by competing in NWA TNA and Ring of Honor in the past. Rave’s opposition was “Fabulous” John McChesney, another star quickly on the rise throughout the wrestling world. McChesney has faired very well in both singles & tag action lately but tonight was Rave’s night, as he defeated McChesney and won over the fans, as he too received chants of “Please Come Back”.

Also making his debut was Josh Daniels, a man many experts have compared to Chris Benoit, and it was clear why when he took on Al B. Damm. Damm tried to ground Daniels, showing a new attitude clearly instilled on him by his Newvolution tag team partner “Simply the Best” Carlton Kaz. However, Daniels came back with plenty of Dynamite Kid/Chris Benoit-esque offense including a German suplex and a diving head butt. Daniels finished off Damm with a fisherman’s buster for the victory.

Also on the card was New Jack. New Jack was scheduled for a second weapons match against Balls Mahoney, however Mahoney was traveling with Bam Bam Bigelow when he was involved in his accident, therefore Balls was unable to appear as well. New Jack decided to issue an open challenge, which was actually accepted by two people. Not only did T. Rantula come down to attempt revenge for New Jack’s infamous 20-foot dive on him from last April, but Sebastian Dark made his way to ringside also to enjoy the madness. T started in control of New Jack, carving away at his head with Jack’s various sharp objects. However, New Jack was able to comeback with the help of a trash can lid and a golf club. Sebastian involved himself as well, delivering the occasional cheap shot when need be. The distraction seemed to work as T was able to hoist a bloody New Jack over his head and deliver a chokeslam for the pinfall victory. T. Rantula adds another major highlight to his extensive resume and avenges his loss to New Jack from last April.

Another wild night of IWC action complete, and somehow it will still escalate from here because arguably the biggest show of the year is only a few weeks away: Friday night, July 2nd at the Big Butler Fair. Who will Norm Connors pick to face Bubba the Bulldog in the Hair vs. Hair challenge? And what other big names will be added to this extravaganza? More blockbuster announcements to be made later this week!