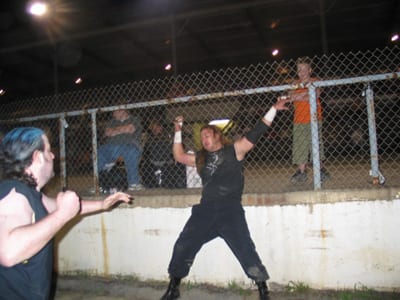 The largest crowd of the year gathered at the Big Butler Fair for what is traditionally one of IWC’s most significant and important shows of the year. And with the amount of star power in attendance this year, it was no different this time around.

The major point of speculation leading up to the event was what role 3 time former World champion Mick Foley would have on the event. Foley came out to address the crowd and made his intentions of serving as a guest referee tonight known. Around the same time, Sebastian Dark unexpectedly joined yours truly and Anthony Kingdom James at the broadcast position, verbally trashing Mick Foley throughout Foley’s speech. More company was on it’s way when T. Rantula also made an unexpected appearance, in an attempt to make claim to being the true hardcore legend, bringing up the fact that T. Rantula did indeed defeat Mick Foley almost a decade ago. Foley was less than kind about T’s interruption, leading to a T. Rantula attack on the best-selling author. When Foley began to gain the upper hand, Sebastian Dark (who would later refer to T. Rantula as “his investment” on commentary) raced from the broadcast area to the ring, and a 2-on-1 beat down ensued but it would not last. Shirley Doe appeared to rescue Foley, allowing Foley to make the announcement he would referee the Falls Count Anywhere match between Doe and Dark later that night, and Foley dared T. Rantula to try to get involved.

The match itself was as brutal and uncontrollable as expected and then some. Even though the Commission had banned this match, IWC took the risk and made the match anyway because Doe, Dark, and all the fans wouldn’t have it any other way. Both men battled each other all over the ringside area, up into the grandstands and virtually everywhere else remotely near the area. Chairs, tables, and other assorted objects came into play as well. After 9 months of building rage between the two it was finally all coming out at once and neither man were holding back. Finally action made it’s way back into the ring, but a knee injury prevented Foley from being able to properly dodge the action, and Foley himself was knocked down temporarily. T. Rantula used that as his chance to interfere to not only get back at Foley, but also assist Dark who had T’s back against New Jack the previous month. T drilled Doe with a choke slam, but Foley got back to his feet and pulled out the one and only Mr. Socko, subduing T with the mandible claw. The distraction allowed Doe to recover as well and take Dark out with a variation of a Michinoku Driver. Head referee Bruce Gray slid into the ring to count Doe’s pin on Dark and Foley’s pin on T simultaneously, raising both men’s arms in victory. Foley avenges his 10 year old loss to T. Rantula, and Shirley Doe avenges the months of mental & physical torture from Sebastian Dark. A perfect ending for both hardcore legends.

IWC champion Eric Xtasy again was able to find a way out of defending the championship, instead teaming with his newfound special friend Glenn Spectre against the slightly more experienced team of “Barbaric Berzerker” Jimmy Jacobs & “Fabulous” John McChesney. Spectre shocked and disgusted everyone in attendance when he showed up for the match dressed in, of all things, a Wonder Woman outfit. After a pre-match rubdown in the middle of the ring, Xtasy & Spectre were ready for the match, but oftentimes seemed more concerned with each other than in actually having a match. McChesney was isolated for a majority of the match, but the tides turned once McChesney was finally able to tag Jimmy Jacobs. Jacobs & McChesney retained control as the match spilled to the outside and back toward the locker room. McChesney decided to pull off one of the most memorable moments of the night, as he delivered a crossbody off the top of the ring truck onto his opposition. However, that may have been more risk than was worth it because Xtasy & Spectre recovered before McChesney and were able to finish the match by pinning Jacobs after a move being referred to as the “Shining Anal” for the victory. However, after the match the humiliation continued as Xtasy delivered two Sexually Transmitted Drivers to McChesney. Xtasy & Spectre are victorious, but it’s only a matter of time before IWC management makes Xtasy defend that championship once again.

Super Indy champion Chris Sabin defended his championship against Sterling James Keenan, a man who has been desperate to regain gold and restart his unstoppable uprising. From losing the title, to losing CM Punk, to losing a match to Soldier, Sterling has been less than stellar in recent times. As a result, he was out to try to accomplish what CM Punk could not: defeat Sabin for the Super Indy Title. Sterling controlled much of the match and seemed to be wrestling much better against Sabin than he had in a while, however Sabin’s secret weapon, the jumping enziguri kick he can nail in a split second, is what helped turn things around for Sabin. That move changed the momentum drastically, and although Sterling still kept up with Sabin, a comeback was imminent. Sterling survived Sabin’s devastating springboard tornado DDT, but succumbed to the Cradle Shock, for a hard-fought and much-deserved win for Sabin. Sterling’s streak of bad luck continues, and Chris Sabin’s undefeated streak continues as well. Our Super Indy champion has once again proved why everyone loves to “Hail Sabin”.

A series of forced changes lead to our scheduled tag team championship match never taking place. “Classic” Colt Cabana is currently sidelined with pneumonia, and outstanding circumstances prevented Chris Hamrick from attending therefore the match became one-half of the IWC tag champions Tracy Smothers vs. one half of the scheduled challengers CM Punk vs. the man who would’ve been Punk’s mystery partner to replace Cabana, “No Gimmicks Needed” Chris Candido. All three went through a very physical contest, but the outcome saw CM Punk dive onto both men with a crossbody to pin them both for three. After the match, Candido punched out Smothers to vent his frustrations.

Dirk Ciglar battled Dennis Gregory in the exciting opener to the show. Gregory was his usual loud-mouthed self, trashing Butler & its inhabitants every chance he got. Gregory’s arrogance caught up with him when Dirk Ciglar battled back and hit Gregory with his version of the Swanton Bomb to defeat and upset the veteran. Ciglar has finally gotten the breakout win he’s been looking for and it couldn’t have come against a better competitor or at a bigger show.

The legends match pitting the longest reigning WWF/WWE Intercontinental champion in history, The Honky Tonk Man, against local legend Lord Zoltan gave fans a chance to see a couple stars from days gone by, however Zoltan brought to the ring with him his new protégé, J-Rocc, an accomplished brawler who is based primarily in Cleveland but has appeared on NWA TNA broadcasts in the past. Looking at Zoltan’s past charges (none other than Shirley Doe & Sebastian Dark) there’s no telling what he could mold J-Rocc into given the proper time. J-Rocc interfered extensively for Zoltan but the crowd was definitely on Honky Tonk’s side from the moment he stepped through the curtain and serenaded everyone with his legendary entrance music. The 2-on-1 odds could not keep Honky down, as he hit Zoltan with his signature “Shake, Rattle, and Roll” neck breaker for the victory.

The J-Rocc/Zoltan strategy was 0-2 at the Butler fair, because J-Rocc’s IWC debut consisted of an open challenge to anyone in the IWC locker room. Much to his chagrin, the legendary “Hacksaw” Jim Duggan answered the challenge. The former IWC tag team champion Duggan was double-teamed most of the match by J-Rocc and Zoltan, but the double-tough brawler battled back and defeated J-Rocc with his trademark three-point stance clothesline.

The recently returning Carton Kaz had a tough task ahead of him in the form of the monstrous debuting Thunderbolt. Thunderbolt had an impressive array of power and agility, but Kaz persevered through the pain, battled back and hit the Kazstrator for the pinfall victory.