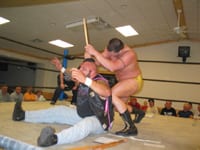 IWC’s third journey to Turkeytown turned out to be an overall enjoyable night for most everyone involved, and perhaps no one enjoyed themselves more than the IWC Heavyweight Champion Eric Xtasy and his very, very close friend “Wonder Man” Glenn Spectre. The night for this ambiguous duo started when it was Man vs. Boy as “Wonder Man” took on the returning Shark Boy. Naturally, Spectre had Xtasy right behind him, willing to offer any assistance needed. The match itself was one of the more bizarre matches seen in quite sometime, featuring everything from Spectre’s questionable advances to the trademark Shark Bite. Even referee CJ Sensation couldn’t stay out of the way of all the bizarre happenings. Xtasy inserted himself into the match numerous times to aid his friend & partner but no amount of interference could keep the Shark down. Sharky mounted a comeback and was on the way to a probably victory, until Xtasy inserted himself again, grabbing Spectre’s hands to give him extra leverage on a pinfall attempt, giving Spectre a tainted victory.

Step Two of their mission was making sure Xtasy successfully defended his IWC Championship against top contender Shirley Doe. Doe had been lobbying for a rematch ever since the prior Turkeytown show, which saw Doe gain a DQ victory over the champion. Prior to the battle, Xtasy informed Spectre he wanted to do this one by himself, and sent Spectre to the back. The match was a back and forth battle, bringing out the best in both men. Several slugfests and even a slapfest took place during the match. Xtasy was able to take control with moves such as The Lady Killer and The Happy Ending, however Doe ended up recovering and nailing his Shining Wizard and a series of forearms. As the action intensified, head referee Bruce Gray was caught on the receiving end of a splash and temporarily incapacitated. Spectre took advantage of the misfortune, ran in and hit Doe with what was once called “The Ghost Buster” but is now “The Glennema”. Xtasy followed that up with the STD, Sexually Transmitted Driver, as Gray recovered to count to 3. Xtasy retained his title but it wasn’t enough for him, as the mugging continued after the match. That is, until everyone’s favorite fish Shark Boy reappeared to run off the happy couple, and even stealing Xtasy’s title belt for a moment. Could Shark Boy be setting his eyes on the IWC Title? Regardless, Xtasy steals another one and remains IWC Heavyweight champion.

Sterling James Keenan’s streak of bad luck hasn’t ceased since losing the IWC Heavyweight Title several months ago. Sterling has recently decided to switch gears and begin focusing on the IWC Super Indy Title, hoping to work his way up to another title shot against Chris Sabin. On this night, Sterling issued the challenge to a man who knows Sabin extremely well from their time in NWA TNA together, “The Original Playa from the Himalayas” Sonjay Dutt. Sterling did what he could to ground Sonjay, and while Sterling did a good job of forcing Sonjay to minimize his aerial attack, Dutt was still in rare high-flying form. And it was that high-flying aspect that brought him to victory. Sterling thought he was well in control of his opponent, but Dutt countered with one of his lightning-fast hurancanranas out of nowhere for the victory. Sonjay Dutt has made an impressive showing by defeating a former champion, almost assuring more frequent & higher profile appearances in IWC. Sterling, meanwhile, continues on his string of bad luck.

In addition to Sonjay, another high flying IWC favorite returned, none other than “M-Dogg 20” Matt Cross, as he battled “Fabulous” John McChesney in a battle of two of the fastest rising young stars in the business today. Cross, wrestling in his first IWC singles match in almost two years, was in rare form, even breaking out the rarely-used-in-IWC Flagpole Press. McChesney hung right with Cross the entire time however, and several exchanges of hard strikes and chops were frequently seen in the match. An apparent injury to M-Dogg turned out to either be a quick-thinking recovery, or a ruse designed to swing more momentum in his favor. If it was indeed the latter, it wasn’t as successful as he had hoped, as the match continued to be hard-hitting and evenly-matched. Finally McChesney was able to gain enough of an advantage to hit his Cliffhanger DDT finisher to finally pin M-Dogg. Arguably the most competitive and physical of the night, Fab gets the win, but neither man’s drive and competitive spirit went unnoticed.

Speaking of physical, that word can also describe the IWC Tag Team Championship Match, as champions Tracy Smothers & Chris Hamrick defended against the debuting Wildcards, Black Jack Marciano and Eddie Kingston, who have made quite a name for themselves competing for various other major independent promotions across the country. The Wildcards were relentless in not only their pursuit of the tag titles, but also antagonizing the fans, as The Wildcards quickly let it be known that they didn’t care who cheered for them. This match was also memorable for the high-impact hard-hitting evenly-matches effort all 4 men put forth. The Wildcards strategy was to isolate Hamrick, which worked for some time, but the most memorable point in the match had to have been Chris Hamrick’s chops, which resounded throughout the building like no chops ever heard before. The crowd was at its loudest and all four men were at their best. After several minutes of intense action, Hamrick hit his sit-out Tombstone piledriver, allowing referee Bryce Remsburg to count to 3.

Two-time former IWC Champion Dennis Gregory was none too happy when he was upset by the up-and-coming Dirk Ciglar at the Big Butler Fair earlier this month, and as a result a rematch was in order. Gregory learned nothing from his previous ordeal, as he was just the same arrogant individual he’s always been, more concerned with bashing fans than with victory on some occasions. As a result he was again caught surprised by Ciglar, as Gregory was pinned with a small package, making Ciglar 2-0 against the former champion.

And of course, we can’t forget about “Fans Bring the Weapons” featuring the legendary T. Rantula against Brock Singleton. Everything from traditional wrestling weapons, such as chairs, tables, and baseball bats, were used as well as more unique items such as a plastic toy dinosaur, a toy guitar, and a whoopee cushion. T. Rantula even had a plunger stuck to his head at one point. Brock tried to outsmart T by hiding a chair amongst all the plunder, but a bloody T fought back, threw Brock through a table propped up in the corner, and hit his patented chokeslam to pin Brock Singleton and win the match.

Also on the card, J-Rocc, fresh off of his battle with Hacksaw Jim Duggan, took on the debuting Zubov. Not much was known about Zubov, but even more mysterious than Zubov was the man who appeared at ringside was a man by the name of Devin Sturgis, dressed rather lavishly and carrying some sort of contained, and it wouldn’t take long to find out what was inside. As a matter of fact, J-Rocc got an up-close look since the contents were powder thrown right into J-Rocc’s eyes. Zubov took advantage of the distraction to steal a victory, but a partially-blinded J-Rocc chased both men to the back, ready to exact revenge.