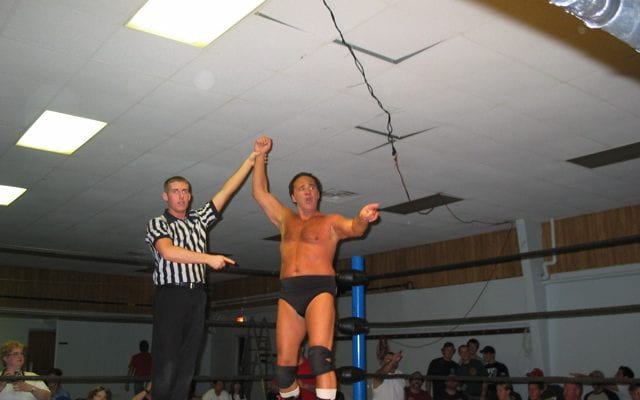 IWC’s regular media correspondent, Joe Dombrowski was unable to make the Duncansville show, and so I’m taking it upon myself to submit the web report on this weeks IWC action. So gather around, and let’s make this quick and painless, the sooner we get this done, the sooner we can all get to the bar.

The Duncansville crowd was welcomed to the show by special guest ring announcer, Carlton Kaz, who in Hawaiian Shirt, and straw hat, lent his own unique flair to the evening on the microphone. Kaz, a Shaker Heights (Cleveland suburb) native, opened the night by announcing Cleveland’s own J-Rocc returning to IWC competition against Dirk Ciglar, who’s been on the good side of a winning streak lately. J-Rocc dominated the early part of the match by concentrating his attack on Ciglar’s lower back, but “CiglarBabeeee!” was able to rally and hit a double springboard moonsault for the pin.

Next up was Zubov with his manager Devon Sturgis in his second IWC match, this time facing the returning Dr. Feelgood. Zubov struggled not only with Dr. F, but also with the crowd, who seemedconvinced that he was a certain former star of the WCW, WWF and Atlanta Falcons. The crowd also amused itself by making fun of Sturgis’s $3700 lynx coat, which I don’t understand, because I thought it was fly. Anyway, Zubov was nonetheless able to pull out a win when he reversed a Feelgood suplex attempt for a pin while Sturgis held Feelgood’s feet down to prevent the kickout.

In a continuance of hostilities from, I guess, the Revolutionary war, American hero, the Patriot faced off against the United Kingdom’s Dennis Gregory. Gregory started the match on the mic by questioning the Patriot’s, uh… patriotism, and vowing to discover who was under the mask. He then left the ring and proclaimed that the match would begin when he was ready and not a moment sooner. The Patriot responded with a baseball slide that booted Gregory clear into the 5th row. This began a back and forth brawl where Gregory continued to try to remove the Patriot’s mask as the crowd rallied with chants of “U-S-A!” This eventually led to the patriot hitting a sunset flip off of the turnbuckle for the “1-2-3!”

“MDogg-20” Matt Cross challenged “Faboulous” John McChesney, attempting to avenge his loss from last week in Turkeytown. The two men wrestled a back and forth classic with crowd support split pretty evenly between them. A series of near falls and finishes took both men to their limits with neither man wanting to give in to defeat. Things looked good for Faboulous when he had Cross laid out for a top rope splash, but navigating the low ceiling proved difficult for McChesney. MDogg was able to hit him with a Yakuza kick and thus tie the series between them at one match apiece.

The duly elected mayor of the legendary hometown of wrestling’s greats, Parts Unknown, Mayor Mystery presented his city’s newest export, Dorian Deville in his IWC debut. Deville had a challenge on his hand, as he drew for his debut match none other than local legend, the monster T. Rantula. The two beat each other mercilessly with Mystery intervening on Deville’s behalf whenever he thought he could get away with it. However, the match got out of control and the two men ended up knocking referee Bruce Grey out cold, prompting replacement referee CJ Sensation to disqualify them both. This didn’t stop T., however, who took the end of a match as open license to plaster Deville over the head with several shots from his trademark speed limit sign. He then did the same to Mystery, leaving him in a heap on the floor outside the ring. Grey, Deville and Mystery all had to be helped ringside by Sensation and members of the IWC security team as T. Rantula celebrated what I guess you could consider a moral victory in the ring.

The IWC Tag Titles were on the line next as Rebel’s Army featuring Rockin’ Rebel and “Tough Enough” Greg Matthews took on tag champs, Southern Comfort. Matthews and Rebel did an incredible job of isolating Chris Hamrick (who was sporting a new short hair look) from his corner as partner Tracy Smothers was forced to watch and wait from the apron. However, after busting open Matthews’ lip, Hamrick was able to tag in Smothers and they impressed the fans with more of the innovative offense that we are used to seeing from the champions (including relieving Matthews of his pants at one point, something which I’m not sure any of us really wanted to see). Matthews took out his frustration by physically confronting referee CJ Sensation, who defended himself by pushing the former Tough Enough star to the mat. Rebel was nearly able to capture the titles for the two in their IWC debut as he had Smothers up for a piledriver, however Hamrick came out of nowhere, jumping over them both and taking Rockin’ Rebel down with a sunset flip, retaining the titles for Southern Comfort for yet another match.

The main event featured Sterling James Keenan trying to break the recent losing streak he’s been on (since losing the Heavyweight Title to Dean Radford) by challenging “The Living Legend” Larry Zbyszko. Despite badmouthing the legend on the mic before the match began and claiming that tonight would be the night that he would end Zbyszko’s career, Keenan ended up almost paying homage to him by taking a page out of Zbyszko’s book and stalling throughout the opening phases of the match. SJK’s antics would be no use however, as eventually The Living Legend would catch up to him and the two would lock up. Zbyszko would keep Keenan grounded with a succession of mat wrestling techniques with Keenan rallying and tying the veteran up in the corner with a succession of kicks and strikes. It wouldn’t be enough, however, as Zbyszko would battle his way back and roll up Keenan for the pin. Keenan would add another loss to his record bringing him to, I don’t know, something like 0-1000000 since he lost the title in March.

And that’s the way it was. Join us next at CCAC South on August 13th for a TV taping, when Joe Dombrowski should be back to do this job. Me, I’m off like a dress on prom night. It’s Miller Time.