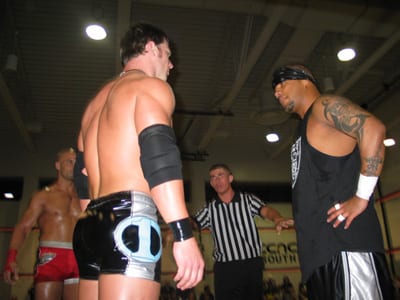 While the card from top to bottom was among one of the greatest in IWC history, fans were most looking forward to the 3 way dance, and also the Punk vs. Hero battle. And it was both of those matches, built on respect & sportsmanship, that would end up having all respect & sportsmanship thrown right out the window.

Three of the best anywhere in the world today headlined this card in a Three Way Dance, and not only that, it was contested under Elimination Rules. All 3 men were at their best, capitalizing on every opening they found. If someone diverted their attention toward the other participant, the third man was always right there to take advantage of the situation. All 3 had to slightly vary their offense to accommodate the extra adversary, which saw several move variations, such as AJ performing a Flatliner with one arm, while executing The Phenomenon with the other. Homicide was the first one to be eliminated, at the hands of AJ Styles, and while that’s nothing to be ashamed of, something inside Homicide snapped. Perhaps it was the fear of falling off the IWC radar. Maybe the frustration of being pinned by AJ in both his IWC appearances. Whatever the case, Homicide exploded and a brawl between he and AJ ensued even though the match hadn’t yet officially ended. Officials & security poured from the locker room to get Homicide out of the ring and off of AJ so the match can continue.

The battle just got more interesting from there. Daniels became the first man to ever hit AJ Styles with Styles’ own Phenomenon move, and surprisingly did it just as gracefully and effectively as AJ always does. Aj was able to recover and match Daniels at that game, as AJ hit Daniels with The Fallen Angel’s own “Angel’s Wings” move for another near-fall. Styles continued on, but Daniels countered in a beautiful sequence ending with the Last Rites to pin AJ for the 3 count. Daniels avenges his loss to Styles from last May at Super Indy 3, but now our attention swings to Friday, August 27 right back at CCAC South Campus when AJ Styles battles Homicide in a Respect Match!

CM Punk & Chris Hero finally brought their storied rivalry to the Eastern portion of the country, and it did not disappoint. Both men demonstrated the evenly-matched tendencies both men have had for years, as after the first 10 minutes of battle they were still at a virtual stalemate. No matter what one man tried, technical wrestling, brawling, whatever, the other had enough to hang with him. Chris Hero used the strategy of focusing on Punk’s left arm, to the point where Punk couldn’t even move it by the end of the match. Undaunted, Punk continued to fight back and both men remained totally even, as the live crowd continued to become more and more excited to see how these two warriors would finally be able to put each other away. The match started to open up more, and the back and forth action quickened and intensified. Both men started hitting near falls and devastating submission attempts. Unfortunately, as the match reached its most exciting point, the obligatory 30 minute time limit instilled in all matches that evening came to an end.

However, fans were demanding more, chanting “5 More Minutes” at the top of their lungs. Hero grabbed a microphone and said he didn’t have 5 more minutes left in him, he had 64 minutes left in him. Punk responded by saying if Hero has 64, Punk has 120, even with only one arm. Hero agreed, but moments later, backed out and left the ring, saying Punk didn’t deserve 5 more minutes of his time because he’s nothing but a bitch. Punk responded saying it was Hero that is the biggest bitch he’s ever seen, which is saying something since he knows a lot. Despite the fact that Punk was always the one of the two more likely to take a cheap shot to get ahead, it was Hero tonight that used similar tactics to get at Punk. It looks to me like the IWC chapter of Hero vs. Punk is far from over.

After weeks of hesitation, IWC Champion Eric Xtasy was finally forced to defend his Heavyweight Title against a man whose partner was on the receiving end of 2 Sexually Transmitted Drivers thanks to Xtasy, none other than the Barbaric Berzerker Jimmy Jacobs. Despite being outweighed by about 100 pounds, Jacobs took the fight right to Xtasy, until Xtasy press-slammed Jacobs over the top rope and out of the ring early on. Not even the rock-solid cranium of Jacobs could survive a move such as that, and Jacobs was weakened for the rest of the match. Xtasy was able to use his immense power advantage, hurling around his one-time ally Jacobs all over the ring, as interestingly enough, IWC newcomer J-Rocc took notes at ringside. However, in due time, the adrenaline began flowing through Jacobs once again as he began Hussing Up. Jacobs was able to knock the champion down and hit a perfect senton splash from the top, however with referee CJ Sensation temporarily subdued, Xtasy’s special friend “Wonder Man” Glenn Spectre interrupted Jacobs’ attempt at the Contra Code, enabling Xtasy to hit the Sexually Transmitted Driver to retain his Heavyweight Title.

While Xtasy spent the night fighting off his current top contender, one man attempted to rise back up to said #1 contender status, as Shirley Doe faced Glenn Spectre, the roadblock Xtasy had told Doe he must get through if he ever wanted another shot at the IWC Title. Before the match, Spectre spoke out about how much he hated hardcore wrestling and hardcore wrestlers. In an even further twist, Spectre had a special referee appointed to the match: Commission representative Chris Wood, who used his power with the state as well as the referee’s license he still possesses, to enable himself to officiate the contest. It seemed Wood might actually be fair, as his first act was to eject Eric Xtasy from ringside. However, things went downhill from there. Wood called the match in a clearly-one sided fashion, favoring Spectre all the way. He even went so far as to feign one of his contact lenses falling out when Doe had Spectre pinned, even though Wood doesn’t wear contacts. Doe was fed up and was about to hit Wood, an act that could’ve gotten him banned from wrestling in this state for life, however lucky for him he was able to duck a charging Spectre, causing Spectre to inadvertently hit him. An attempt at the Glennema by Spectre was countered into Doe Sillyhead 2. Doe used a dazed Wood’s hand to count to three for himself, and Shirley Doe is once again #1 contender. Doe’s next shot at IWC supremacy is August 27th at CCAC South Campus. However something very odd was taking place. As Doe celebrated his victory, Sebastian Dark was at the commentary area applauding him. Does Sebastian have his own plans for the IWC Title’s future?

This night saw the shocking return of Bubba the Bulldog, alongside his cohorts Jimmy Vega$ and Dennis Gregory, as they continued to rant about the alleged disrespect they receive. Bubba predictably went on a long rant about how “unfair” it was for him to lose his morning radio job so The Howard Stern Show could return to Pittsburgh. Bubba also claimed the only reason he lost the Cage Match from this past June was because there was a “weak link” in his group, although he didn’t specify whom. Finally, action got underway as Vega$ battled Dirk Ciglar. After two straight victories over Gregory, this was Ciglar’s chance to step up even further and defeat another former champion. Predictably, all 3 worked together to make sure Ciglar had no shot of winning. Bubba distracted the referee extensively, allowing a blatant 2-on-1 double team from Gregory and Vega$, but as Vega$ attempted the Cha-Ching Slam, he and Gregory accidentally collided, knocking Vega$ off balance, giving Ciglar the chance to roll him up for three. All three men were enraged, and attacked Ciglar for quite a long time after the match, even though they didn’t even seem on the same page then. Bubba used this to further prove his point, that he had injured another promising IWC star and ruined another show, a trend that will continue as long as IWC is around. However promoter Norm Connors had had enough, and after the months of verbal abuse coupling with Bubba slamming the cage door on Connors’ head last June, Connors hit the ring with salad tongs and shoved them in the most sensitive of places. A high-pitched Bubba was very upset, but Connors wasn’t done. Then he announced that if Bubba’s so upset about the return of The Howard Stern Show to Pittsburgh, then maybe Connors will get someone from the Howard Stern Show to come fight Bubba himself.

This was a very important night for Sterling James Keenan as well. Sterling has been on a quest to escape his losing streak for quite some time now. In addition, he seems out to prove to the world that CM Punk made a mistake when he decided to sever ties with him. Sterling’s plan to prove it would be to go through Punk’s current ally in many areas, “Classic” Colt Cabana. Cabana was in rare form, as only Cabana can, wrestling just about the entire match in sunglasses. However, Sterling showed he was not to be taken lightly, as during a pin sequence, he used the rope for leverage to finally end his losing streak, not just against anyone, but against Punk’s ally and the only man to ever hold both IWC singles titles. A huge win for Sterling, now time will tell if he can use it to regain the bigger and better things he once had.

In a battle to see who faces IWC Super Indy Champion Chris Sabin on Saturday August 28 in Erie, PA, “Fabulous” John McChesney was opposed by Carlton Kaz, a last minute replacement for “M-Dogg 20” Matt Cross, who had suffered an unfortunate facial injury not too long ago. Both men knew what was on the line and had an excellent match-up, but Matt Cross would have a major impact on the outcome. As Kaz had the referee diverted, Cross tripped McChesney, who was on the top rope. Kaz took advantage and was able to score the victory and gain the Super Indy Title shot. McChesney was enraged after he figured out what had happened, Cross had not only cost him the match but a chance at the Super Indy Title in front of his own hometown, and for what reason? Because Cross was jealous over the fact he couldn’t get the title shot, so he wouldn’t let McChesney have it either? Fab wanted a fight right then and there, but Cross backed away, with a look of silent intensity on his face. The McChesney/Cross war is another issue far from over.

Also on the show, the CCAC debut of “King of Diamonds” Eddie Kingston and Black Jack Marciano, collectively known as The Wildcards. It only took a minute before Kingston & Marciano’s natural irritating personalities had the entire crowd hating them, and cheering for Dunn & Marcos louder than ever before. It was a tremendous tag team enouncer. The Wildcards isolated Marcos, however he was able to reach Dunn in due time. The RCE’s fought back nailing The Wildcards with the Unskinny Bop & the Excellent Adventure, but they took their eye off of one member of the team. The other Wildcard swooped in, hit a twisting bulldog he calls the Russian Roulette to defeat Dunn & Marcos.