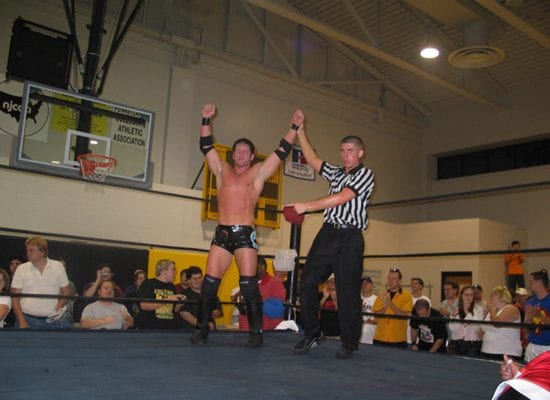 One of the biggest headlines to emerge from this night all centered around the coveted IWC Championship. Shirley Doe, who holds so much respect for the title belt, had culminated weeks of hard work by finally getting another chance to become the best. Because of that respect, Doe wanted this to be as competitive of a war possible, and he wasted no time laying into IWC Champion Eric Xtasy with a series of forearms and strikes, then Xtasy withstood and was able to give back. Xtasy’s tempter had been raised, and he had forgotten all about his strategy of victory in the easiest form possible, this was now a fight to the finish. Or so we thought. Xtasy’s companion “Wonder Man” Glenn Spectre came out with of all people Commission representative Chris Wood, whose hatred for the often-hardcore Doe is well documented. Wood ordered referee Bruce Gray, who was the only referee in attendance, out of the ring, while Spectre interfered behind Gray’s back. Despite the now 3-on-1 odds, Doe somehow stayed in the match and fought back, but Xtasy had yet another trick up his sleeve. A man dressed as Xtasy came out of the front row and over to ringside to trip up Doe, allowing Xtasy to defeat Doe with the STD: Sexually Transmitted Driver. The Xtasy imposter ran into the ring and revealed himself as IWC newcomer J-Rocc, who was seen ringside scouting Xtasy’s last title defense. Xtasy, Spectre, and J-Rocc are now together, as Xtasy’s band of close friends has gotten even stronger.

Promoter Norm Connors was less than happy with the lengths Xtasy had gone to to save his title, and made a no-disqualification rematch for September 25 at CCAC South Campus in West Mifflin, Pa. Chris Wood interjected himself, once again abusing his power with the state, saying the only reason the state would sanction another title shot for a wrestler as violent as Doe, would be if Wood himself was appointed special referee for the match. Connors countered, stating since it’s his promotion, he has the right to book a second referee for that contest to watch over Wood, and that referee will be the legendary MICK FOLEY!

From a man respected the world over by Foley, to two men in a fierce battle over respect. Homicide shocked fans at “Summer Sizzler” by attacking AJ Styles after Styles had eliminated him from a three way dance. As a result, this match was made, with the loser having to say “I respect you” to the winner. Much like our championship match, this was a hard hitting evenly-matched affair with both men pulling out all stops to gain victory, whether it be on the mat, outside the ring, or in the air. In a match so important, that New Jack joined yours truly & Jeff Gorman for guest commentary, the desperation in Homicide to gain victory was as apparent as the heart and desire displayed by AJ whenever he steps in a ring. The end of the encounter came as Homicide attempted a top-rope hurancanrana, but AJ used his resourcefulness to hang on to the legs and turn it into a second-rope Styles Clash for the victory. This time Homicide took the victory in classy fashion, shaking AJ’s hand to honor the match stipulation. Homicide, in showing AJ the respect he deserves, won over the respect of everyone in attendance. Don’t be surprised if this is far from the last we hear of Homicide.

Super Indy Champion Chris Sabin defended his championship and his near one-year IWC undefeated streak by facing CM Punk in a return match from their tremendous contest last June. Punk used much of the match to focus on Sabin’s torso, trying to literally drive the wind out of Sabin’s lungs & stomach. However, Sabin wasn’t as damaged as Punk had thought, and when Punk tried to turn a high-risk maneuver into a pinning predicament, Sabin kept the momentum going until he was the one on top, and caught Punk off guard with the three count.

The “M-Dogg 20” Matt Cross/”Fabulous” John McChesney singles war evolved into a tag team rivalry. Cross teamed with the returning Josh Prohibition, sporting a new shaved head & full beard, only adding to the theory that Matt & Josh have undergone a repulsive attitude change in recent months. Naturally, McChesney recruited his “FabuHUSS” tag partner “Barbaric Berzerker” Jimmy Jacobs. Matt & Josh controlled a majority of the match until Jacobs used his trademark perseverance and tenacity to Huss Up and tag in McChesney. The momentum swayed over to FabuHUSS, as they scored a simultaneous pin over Matt & Josh using a superplex and DDT respectively. Machesney & Jacobs scored the win, but had in no way gained full revenge on their opposition. However that opportunity would be just hours away.

Current NWA TNA X Division Champion and captain of the “Team Canada” faction in TNA, Petey Williams, made his debut against Sterling James Keenan. Sterling was now sporting jet black hair, but the one thing that hadn’t changed was the size of his ego. Gloating about how he defeated Colt Cabana “clean” at “Summer Sizzler”, Sterling vowed to defeat Williams and then steal the X Division Title even though it wasn’t even at stake in the match. To Sterling’s credit, he continues to raise his level of competition, taking it to Petey just as much as he battled through Sonjay Dutt, Larry Zbyszko, and so many others, win or lose Sterling will accept nothing less than challenging the best. Sterling actually managed to counter Petey’s famous flip piledriver, dubbed “The Canadian Destroyer” on one occasion but moments later, Williams was able to “reel him in” and execute the Destroyer for the victory. Petey celebrated with his title, as the fans praised him with chants of “Please Come Back”.

One of the more interesting stories unfolding right now is the potential friction within the Self-Proclaimed Triple Threat of Bubba the Bulldog, Jimmy Vega$, and Dennis Gregory. Two weeks ago at “Summer Sizzler” Bubba insinuated that his Triple Threat had a weak link, but never specified exactly who he was talking about. Both Vega$ and Gregory were ready to prove their worth tonight, and set out an open challenge to any man to take both men on. What they got in response was not just a man, but a Wonder Man, as Glenn Spectre was the sole individual to accept the challenge of the men who combine for 4 IWC Heavyweight Title reigns. The match was technically a three-way, however Vega$ and Gregory were working in tandem until it came time for a pinfall to be attempted. Both men began to fight amongst themselves, and Spectre took advantage of the miscommunication to sneak out a victory, much to the dismay of Vega$ and Gregory. Both men were left arguing in the ring, blaming one another for the loss, and eventually brawled their way clear out of the building. The tensions are reaching their all time high, but it’s still unclear who exactly is the weak link, if any, in Bubba’s Triple Threat.

Speaking of injuries, one is bound to pop up when New Jack is scheduled to appear. His rubber match with T. Rantula never reached an official decision, but you could tell that there would be no true winners in this match. T was almost able to chokeslam New Jack, just as he did to defeat him this past June, but thanks to a barrage of shots with a fork & sickle, New Jack retained the upper hand, opening up T. Rantula’s ear and leg in sick fashion in the process. Knowing that the Commission was in attendance, promoter Norm Connors rushed to the ring to try to convince New Jack to stop the carnage, however Commission representative Chris Wood stormed into the ring, threatening to shut the show down if the carnage continued. As security aided T out of the ring, Norm turned an angry New Jack’s attention toward Wood, however Wood had no intentions of going near the ring at this point. New Jack swore that there would be another match in his series with T. Rantula, and fans should bring as many thumbtacks, light bulbs, and lighter fluid as possible for it. New Jack vowed to rid the world of T. Rantula once and for all before New Jack’s planned retirement at the end of this year.

That beating kept T. Rantula from appearing in Erie as scheduled, however it would be far from the last we would hear from New Jack…