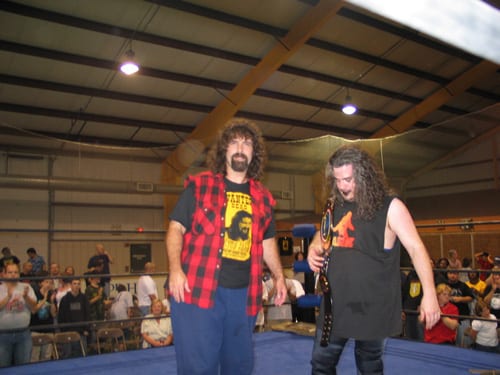 After weeks of building turmoil and increasing friction, the IWC superstars reached their “Boiling Point” on Saturday, September 25 at the Monroeville Sports Center. Special guest co-referee for the night Mick Foley started the evening off right by announcing all money he made from autographs & pictures from that night (a total that reached the $630 mark) would be donated to the Salvation Army to aid those recently victimized by Hurricane Ivan this past week. Mick Foley would correct a few more wrongs before night’s end as well, but he’d need the help of an old friend of his.

The Eric Xtasy/Shirley Doe match-up was perhaps the most anticipated and important IWC Heavyweight Title match of all time. For Eric, it was a time to step up and prove he could retain the championship without his charges “Wonder Man” Glenn Spectre and J-Rocc (both barred from the building tonight) watching his back. For Doe, it was the culmination of a near decade-long ascent to the top of the Western Pennsylvania wrestling scene. Perhaps no one on the regular IWC roster has sacrificed more and worked harder to constantly improve and be at their best than Doe. It was do or die time for the Madman, and because of his undeniable pride, he politely refused any potential assistance and asked Foley to return to the locker room for the match-up. Foley was happy to oblige, but stated he’d be the first out to congratulate Doe after he was victorious.

However, Doe had inadvertently put himself in a precarious situation, as much like his 3 previous title matches, the deck was stacked against him, as Commission rep Chris Wood was still the referee of the contest. In all 3 of the previous title matches, Doe was screwed out of the title, and he had a large hill to climb if the outcome would be different tonight. The match started in Doe’s enviroment, as both men brawled all over the building as Wood, who has always been outspoken against Doe’s matches and excessive violence in general, surprisingly watched on calmly from the ring. When action spilled back inside the ring, Doe retained the upper-hand, but every pin attempt, Wood would refuse to count, citing a “wrist cramp” or other faulty excuse. Xtasy saw his openings and showed his dangerous streak as well. Doe was on the receiving end of a Sexually Transmitted Driver on the arena floor as well as a Happy Ending, but Doe was able to kick out of every pin attempt. The match was at a stalemate, Xtasy couldn’t keep Doe down for three and Doe couldn’t get a fair 3 count from the obviously biased Wood. And things were about to get even more chaotic.

As Xtasy & Wood refused to even hide their allegiance anymore, embracing in the ring, “The Son of 1,000 Bastard Corpses” Sebastian Dark came to the ring with a chair in hand, laying out Doe with a sickening chair shot. Apparently Dark was recruited by Xtasy and/or Wood as well, and considering the hatred between Doe & Dark that will never cease, I’m sure Dark was more than happy to oblige. After Doe recovered from one chair shot, it was time for another, however Doe ducked and Dark leveled Xtasy in the side of the head. Super Hentai, one of Doe’s closest allies and another of Dark’s enemies, stormed the ring to take Dark out of the equation. As they brawled to the back, none other than “Balls Hot” Troy Lords returned after a 5 month absence, grabbed the chair that was still in the ring and struck Doe in the head, signifying a Sexual Harassment reunion. With all the back-up, Xtasy turned cocky again, grabbing a microphone and taunting Doe. Xtasy asked Doe if he needed Foley’s help yet, but Doe still insisted he didn’t. Xtasy retorted with “Well who do you need?” Doe’s response: “I need Cactus Jack!” With that, Foley’s alter-ego, the most dangerous sadistic man in wrestling history Cactus Jack, appeared with a chair of his own. Chairshots took out Troy Lords & Eric Xtasy. Wood foolishly tried to ambush Foley with a chairshot of his own, but that failed miserably and Wood ended up tasting Mr. Socko, as the Mandible Claw finally shut Wood up after 8 months of his tyrannical power trip. Then, out of nowhere, the giant T. Rantula, who defeated Cactus Jack back in 1995, ran-in to try to avenge Foley embarrassing him 3 months ago at the Big Butler Fair. As Doe recovered and took it to a dazed Xtasy, Foley took control of T, and Doe & Foley his stereo Sillyhead DDTs on their oppositions. Doe pinned Xtasy as Foley, still one of the assigned officials to the match, made the 3 count for a moment we’ll never forget, as Shirley Doe is crowned NEW IWC HEAVYWEIGHT CHAMPION! Doe celebrated his victory with Foley and promoter Norm Connors congratulating him, capping off one of the mos memorable moments in IWC history.

The rest of the card was far from forgettable as well, as one of the most talked about wrestlers in the world today made his IWC debut, as ROH Heavyweight Champion Samoa Joe took on current NWA TNA Tag Team Champion “Fallen Angel” Christopher Daniels in a non-title bout. Although the belt wasn’t at stake, since the champion was involved this contest was under ROH rules, meaning the Code of Honor was in effect, meaning competitors must shake hands before and after the match, no interference, and no abusing of the official. The match started tentative, with both men trading side headlocks and entering into a feeling out process, however moments later Joe was the first to start opening the match up with several offensive moves focusing on Daniels’ shoulder, which has been less than 100% for several months now. Joe used his power edge to lock in a series of painful submissions as well as several physical chops & kicks. Daniels was able to find an opening as well though, as he spent much of the match focusing on Joe’s ribcage, oftentimes focusing his offense on attempting to rip the intercostals cartilage and perhaps break a rib in the process as well. Joe was able to use his power to battle back, but both men were considerably weakend by this point. Daniels had next to no energy left and Joe could barely stand, yet the war continued. Back and forth both men fought. Joe’s Avalanche Muscle Buster was countered, as was Daniels’ Angel’s Wings. Finally, after nearly a half hour of brutal action, Joe locked in a sleeper hold, turned it into his patented choke sleeper, as Daniels slowly faded. Referee Bruce Gray checked Daniels’ arm, which dropped twice but did not drop the third time. As Daniels continued to fight off unconsiousness, the bell sounded. The match was ruled a 30 minute time limit draw. The fans chanted first for 5 more minutes, then for 1 more hour, which Daniels didn’t appreciate very much. Joe said that there will be more but on another night and it will be in an IWC ring.

IWC Tag Team Champions Tracy Smothers & Chris Hamrick returned to the Pittsburgh area to defend the titles against the debuting Scottish Highlanders, Rory & Robbie MacAllister. The Highlanders are perhaps best remembered for competing against Rhyno & Tajiri this past July at the Mellon Arena as part of the Sunday Night Heat TV taping before the live Monday Night Raw broadcast that night. Tha MacAllisters came prepared, they had a battle plan and it involved isolating Tracy Smothers from his corner. Rory & Robbie had control for several minutes, but the veteran Smother had an answer to everything Rory & Robbie threw at him, and finally Chris Hamrick was tagged in, turning the match into chaos. Hamrick swun momentum back into the Southern Comfort side and won the match and retained the titles with a top rope legdrop. Promoter Norm Connors chose then & there to make his major announcement of his personal dream match, and it takes place right here in the Pittsburgh area on December 11, as Southern Comfort defend the IWC Tag Titles, one time only, against one of the greatest tag teams of all time, “Beautiful” Bobby Eaton, “Loverboy” Dennis Condrey: the original Midnight Express! Not only that, they’ll be managed by none other than Jim Cornette! Furthermore, it was announced Cornette will be in attendance this Sunday in Newville, right outside Harrisburg, at IWC’s “The Bar Has Been Raised” live event, as Mr. Cornette has something to say about this upcoming match.

Super Indy Champion Chris Sabin, still undeated in IWC rings, defended his title against one of the most deserving contenders on the roster, the unorthodox “Barbaric Berzerker” Jimmy Jacobs. Jacobs was noticeably more physical in this match than in prior matches, perhaps an after-effect of him recently coming up short of a win in a singles match in his past 2 attempts, Jacobs’ first singles losses in the company. Jacobs focused a majority of the match on Sabin’s midsection, however Sabin was able to use his patented jumping enziguri kick to begin his comeback, just as he‘s done so many times. Sabin’s size and power advantage also allowed him the ability to pull out his signature moves like The Bum Rush & The Cradle Shock, and it was the Cradle Shock that put Jacobs down for three. After the match, a disoriented Jacobs went to his instinctive defense mechanism, and pulled out a long metal spike, threatening Sabin with a deranged look on his face. After a minute, Jacobs was able to snap back into reality and shake Sabin’s hand but the Berzerker’s more aggressive streak could be something to look out for in the future. After the match, promoter Norm Connors had another announcement. In addition to IWC’s brand new ring, entranceway, and sound system, IWC now had it’s own championship belts as well. Sabin was presented with the official IWC Super Indy title belt, and considering Sabin is STILL undefeated in IWC, it’s a fitting presentation.

From a near year-long undefeated streak, to one just seeing its beginnings, Petey Williams, the current NWA TNA X Division champion, took on the diabolical Alex Shelley. Shelley, who is notorious for pulling out any and all stops for a victory, had control over the majority of the match, even countering Petey’s devastating “Canadian Destroyer” flip piledriver at one point. Unfortunately for Shelley, Petey also had the sharpshooter in his arenal, and Shelley had no choice but to tap out.

While on the subject of Super Indys, we have to also mention Sterling James Keenan. Sterling now has a new mission, a new uprising to begin, as he has his eyes locked on the Super Indy Title. Sterling laid out his battle plan, specifically mentioned Sabin & CM Punk on his list of victims. Sterling even went as far as dubbing himself a “Super Indy Killer” but before he could get to that, he had a tough task in facind Dirk Ciglar who has been on an absolute roll lately, scoring victories over former IWC Heavyweight Champions on three separate occasions.as of late. Ciglar did everything in his power to defeat another former champion, but Sterling was able to lock in the MK Ultra for a very impressive win. But can Sterling’s new “Super Indy Killer” mindset lead him back to gold?