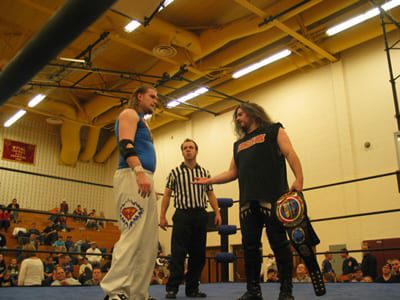 The Future Steps Up As IWC Prepares to Accept No Limitations

IWC’s annual visit to Steel Valley High School in Munhall, Pa had a different feel this year. This year was the feeling of something special, something different. People that attended this show got to see something special, as 4 young men embarked on the beginning of a long, painful journey in the field of professional wrestling. Four Pittsburgh-area debuts of IWC Coalition of Competition training school graduates made their in-ring debuts and showed all their hard work was beginning to pay off, as they did not disappoint. They entered the building as hopefuls, they left the building as stars.

As groundbreaking as IWC’s youth movement has become, nothing can over shine the IWC Championship, tonight in particular. Not only does IWC have one of it’s most deserving, most dedicated, and most popular heavyweight champions in recent memory, IWC also has arguably the deeper list of viable contenders than ever before, and tonight was one of the best, Chris Hero’s, chance at his first IWC belt. The match started playing to Hero’s strengths, as both men exchanged holds and counter-holds. To Doe’s credit, he was able to hang with Hero move for move, something very few men in this world have been able to say. The match spilled to the outside and became more of a brawl, and surprisingly Hero was able to hang with Doe in that environment. When action spilled back into the ring, Hero went to work, systematically taking apart Doe with a series of submission moves and pin attempts. When nothing could keep Doe down long enough, a frustrated Hero tried to just knock Doe out completely, but Doe found his opening and knocked Hero silly with the Magic Bullet. It gave Doe precious seconds to recover and the match was even once again. Doe attempted Sillyhead #2, but Hero countered and tried the Hero’s Welcome. That too was countered, and a second try at Sillyhead #2 worked to put Hero’s shoulders down for three.

After the match, Doe tried to show the proper respect to Hero but was unmercifully attacked by Hero after the match. Another Doe vs. Hero title match seems not only possible but very likely considering the great effort Hero put forth. Add to that the bad blood he created with Doe after the match and a rematch seems imminent. However, Doe faces another name from his past in just days in Wilmerding at “Accept No Limitations” when he takes on one of his greatest rivals of all time “The Hardcore Chair Swingin’ Freak” Balls Mahoney! Will Doe be able to recover in time to take on one of the most dangerous men to ever step foot inside a wrestling ring?

Meanwhile, also at “Accept No Limitations” Chris Hero will have the match of his life ahead of him this Saturday, as he challengers ROH Champion Samoa Joe and the title will be on the line! Chris Hero has a chance to make history, to not only capture one of the most prestigious titles in the country, but to also end the near-two year title reign of Samoa Joe. This match will no doubt be an all-time classic, and it could mark the beginning of a new era.

And to me the most telling moment in that whole situation was Dark’s reaction to what he had done. Despite the seriousness of what he had just done, Dark left with a big grin on his face. As evil and as heartless as Dark is, celebrating something like that is just too much.

Dean Radford chose tonight to make his return to IWC, but when he was supposed to make his way to the ring, we were instead treated to the “Velvet Mafia” comprised of “Sexual Icon” Eric Xtasy, “Wonderman” Glenn Spectre, J-Rocc, and “Balls Hot” Troy Lords. Xtasy gloated about the fact that he was the one to cause Radford’s neck injury that has kept him out of action for six months. Xtasy didn’t even believe Radford was in the building until the familiar sound of Hatebreed’s “I Will Be Heard” blared throughout the building and Radford returned to clean house. A spinebuster to J-Rocc and a Radicator for Spectre but the numbers caught up to him, and Radford soon received a four-on-one beat down and a chair shot right to the forehead. The Velvet Mafia was eventually chased away, but the damage had been done. Has the Velvet Mafia taken Dean Radford out of commission again?

The self-proclaimed Triple Threat exploded as Jimmy Vega$, who recently stated his intentions of leaving the group and once again becoming his own man, took on the “Indy Legend” Dennis Gregory in a battle of former 2 time IWC champions. After having his shoulder rammed into the post by Gregory, Vega$ was considerably weakened but kept up the fight to his former teammate. After several minutes of physical action, a familiar voice echoed throughout the building. It was Bubba’s voice, and he had come for the first time in 3 months, to re-assemble the troops. However, Jimmy Vega$ and Dennis Gregory still weren’t seeing eye to eye and continued to argue until Bubba attacked Vega$ from behind. The attack only stopped when promoter Norm Connors ordered Bubba to compete in a match, against Dirk Ciglar, who holds victories over the other two Triple Threat members. Referee CJ Sensation was knocked down, allowing Bubba & Gregory to double-team Ciglar as well. However, Vega$ somehow found it in him to come back out and sneak up on Bubba to hit the One Armed Bandit. Sensation was revived, Ciglar hit the Swanton Bomb and pinned Bubba. An enraged Bubba threatened death on to Vega$ & Ciglar and challenged them both to a tag team match against himself & Dennis Gregory at “Accept No Limitations.”

The alleged “Super Indy Killer” Sterling James Keenan added more credibility to his name and add “Fabulous” John McChesney to his list of victims. McChesney used his quickness and his agility to his advantage but a very physical STO takedown allowed Sterling to get the win. This is a bad omen for McChesney, who is days away from challenging Super Indy champion Chris Sabin in a title match he’s been after for months and a rematch he’s been after for over a year. Sterling has also set his sights on Sabin’s title, and now that he’s defeated McChesney, Sterling can also lay claim to deserving a title match. The Super Indy Title scene is definitely heating up as well!

The legendary “Hacksaw” Jim Duggan stepped back into an IWC ring for the second time this year, to face a man who no doubt is unlike any other he’s come in contact with before, “Wonderman” Glenn Spectre. Spectre showed where his mind was at earlier in the night, when he claimed Duggan to be the “biggest” star to ever appear in IWC. Duggan controlled the early portion of the match, but Spectre was able to gain control, as he then found out exactly why Duggan has been so successful in his career: He’s incredibly tough to beat up. Spectre resorted to choking several times but much to his dismay, nothing he could do could keep Duggan down. Hacksaw recovered and hit the three-point stance clothesline for the pin. Even though he ended up on the losing end, Spectre does deserve a degree of credit for not only hanging with Duggan for quite a while, but doing so without the aid of his Velvet Mafia co-horts.

Two men that made “Youth Gone Wild” what it was were our debuting stars: the first Filipino male supermodel in wrestling history, Shiima Xion, accompanied and introduced by his personal business advisor, photographer, and manager Chris Maverick, and the very mysterious Jason Gory, originally residing in Hell’s Canyon, Idaho, but now calls the location of this show, Munhall, home. This was both men’s debuts and they were determined to make the most of it. The fact that these men have trained together at IWC’s Coalition of Competition for over a year together meant these guys know each other very well, which made for a very competitive contest. Both men showed a great amount of technical skill, as well as plenty of high-impact moves as well. Gory amazed fans and peers alike with his already-impressive list of aerial assaults, including a sunset flip-powerbomb called the Q.A.S (Quick As S***) and an absolutely breathtaking tope con hilo over the top rope onto Shiima & Maverick who attempted to regroup on the outside. Xion made the most of things as well, just in a different way. Shiima also wrestled very very well for someone of his inexperience, but seemed more focused on showing off his body and creating great photo opportunities than putting Gory away. But if this was Shiima distracted, its scary to think how good he can be if he’s totally focused. A miscommunication between Xion & Maverick, coupled with Gory’s counter to Shiima’s From Lust To Dust, a snap mare driver, allowed Jason Gory to hit a standing one-man Spanish Fly he calls “Masochistic Healing” to score the win. Jason Gory, no matter how inexperienced, and Shiima Xion, no matter how conceited, stepped up and showed they truly belong on the roster of one of the biggest independent wrestling promotions around: IWC. And to think, it’s only the tip of the icebergs of their careers.

Two other recent Coalition of Competition graduates fighting to prove their worth in recent months has been Mickey & Marshall Gambino, who have been locked in a rivalry with “King of Diamonds” Eddie Kingston and Black Jack Marciano, the Wild Cards. Kingston & Marciano defeated The Gambino Brothers Moving Company twice before, however that was in Erie & Harrisburg. This match was in Munhall, and it was home turf for the Gambinos who had several friends & family members at ringside. The Wild Cards used their obvious experience edge to manipulate the referee & Marshall Gambino, while illegally double teaming Mickey and making the phantom audio tags. However, here’s where location plays a big part, as despite all the punishment, the hometown crowd was still behind the Gambinos 100% and willed Mickey on to a comeback and eventual tag. The power of the team, Marshall, came in and took control and eventually was able to set his opponent up for a move dubbed “The Curse of the Gambino” to score their first ever pinfall victory!

However they had no time to celebrate, as Shiima Xion & Chris Maverick, obviously upset over being the only men making their Pittsburgh debuts on the losing end that night, attacked The Gambinos from behind. Kingston & Marciano recovered to turn things into 4-on-2 odds. However, Jason Gory came back to help even the odds and used his lightning-fast quickness to help clear the ring of The Wildcards, Shiima, and Maverick. Gory & The Gambinos were left standing in the ring to celebrate their respective victories as the live event came to a close. A perfect Pittsburgh-area debut for 3 future stars on the rise.

Of course we can’t forget the most famous name to ever come out of Munhall, the giant T. Rantula. While the youth closed the show, the veteran T set the tone for what was to come for the other Munhall-natives, as he took on another very tough brawler, Velvet Mafia member “Big Daddy of Destruction” J-Rocc. Not even Xtasy, Spectre, and Lords at ringside could spoil the big man’s homecoming, as T enlisted the help of Hacksaw Jim Duggan to help watch his back. While Duggan chased Xtasy and company to the back, T delivered the chokeslam for the victory.