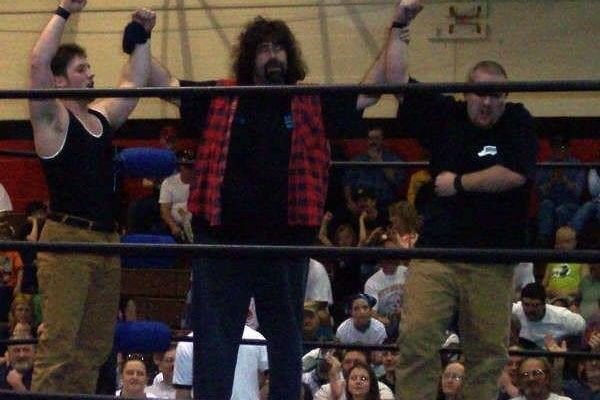 Another near-record-setting crowd converged in Franklin, PA for the second annual Night of Legends extravaganza, a celebration of past, present, and future.

The main event saw legendary former WWF World Champion, and proud American Sgt. Slaughter do battle with the self-proclaimed “Greatest Intercontinental Champion of All Time” The Honky Tonk Man, who was joined by a surprise accomplice, the dastardly soup-eating Canadian Anthony Kingdom James. James spent much of the show away from the broadcast position, apparently backstage striking a deal with Honky. The game plan was effective early on, with several situations of one man distracted the referee while the other did the dirty work. However, with the fighting spirit of the United States coursing through his veins, and the hundreds upon hundreds of fans behind him, Slaughter fought back, countering a sleeper hold into a Cobra Clutch. A last ditch effort by Kingdom to interfere was unsuccessful as Slaughter capitalized on a miscommunication to score the victory.

The IWC Heavyweight Champion Shirley Doe, with a brand new version of the title belt and fresh off of a highly successful tour of Japan, marched into battle against the “Original Wild-Eyed Southern Boy” Tracy Smothers. As a sharp contrast of their prior match, this wasn’t about respect or admiration, it was all about holding on to the IWC Title. Smothers infuriated the crowd before the match-up, threatening and berating the entire crowd until they were nearly riotous. The match shifted to meet both men’s individual styles, from technical wrestling to on-the-floor brawling, both men went deep into their playbook, which included Smothers pulling out a steel chain to use for the unfair advantage. However not even a steel chain could keep Doe down for 3. On the other hand, Doe’s patented Sillyhead 2 could not keep Smothers down either. Finally, Smothers went for the chain once more, however Doe was able to counter into a sunset flip to come out victorious.

Sterling James Keenan, also sporting a brand new championship title belt, defended the championship against the only man to defeat him since he dubbed himself “Super Indy Killer” some 8 months ago, “Spyder” Nate Webb. After an altercation in the Franklin Rumble, Sterling was livid at Webb, attacking him before the bell and brawling around the building before re-entering the ring. Sterling however, soon found himself at a disadvantage, on the receiving end of “The Fang”, a breathtaking moonsault into a Van Terminator, yet it wasn’t enough to keep Sterling down. Webb tried to follow through using a steel chair in a moonsault, but Sterling got the knees up, driving the chair into Webb’s ribs. One MK Ultra later, and Sterling had avenged his previous loss and added another name to the list of Super Indies that have fallen to Sterling. Webb may have not won the title but after the match, he at least 50 young fans danced in and around the ring to Webb‘s entrance music of “Teenage Dirtbag” as Webb left on a high note.

It was a Triple Threat Match where the winner secured the 8th and final spot into IWC’s Super Indy 4 Tournament. “The Future” Chris Sabin, “Fallen Angel” Christopher Daniels, and “Phenomenal” AJ Styles all entered the ring with the Super Indy Title on their mind, a championship Sabin & Styles were never beaten for, and a belt Daniels has been chasing for 3 years. All three men put their bodies on the line, taking many of their incredible trademark high risks, but the ending concerned the sub-story, that being Daniels’ obsession with pinning AJ Styles in an IWC ring, something he’d tried twice and failed at. With Sabin subdued, Daniels went for the Last Rites, AJ countered into an attempted Styles Clash, yet Daniels counters that, hits the Angel’s Wings to pin AJ Styles for the 3 count and earn the 8th and final spot in Super Indy 4.

Watching that incredible match-up at ringside was “Fabulous” John McChesney. After his victory, Daniels noticed McChesney for the first time, and decided to grab the microphone and chastise McChesney. Fabulous cut off the Fallen Angel and let it be known that HE intends to be the next IWC Super Indy Champion, and with that a brawl ensued, a brawl that McChesney got the better of. Daniels bailed out in quick fashion, clearly underestimating just how talented and determined McChesney is. After being publicly embarrassed by Fabulous, Daniels cautiously made his way to the back, perhaps second-guessing his chances of winning Super Indy 4.

Bubba the Bulldog’s time to finally eat his words was here, as after months of verbal abuse toward the man who severed ties with Bubba to become his own man, Jimmy Vega$, Vega$ finally had his chance to face his former leader one-on-one. For the first time in this rivalry, Bubba was without a distinct numbers advantage so he turned to the next best thing, a foreign object which looked to be a small piece of metal. The object served its purpose, knocking Vega$ out temporarily and allowing Bubba to eek out a victory and avoid being obliterated by his former charge, but these two men’s paths would cross later in the night.

The Franklin Rumble is quickly gaining a reputation as an unpredictable fun-filled staple to our legends cards, and a perfect time for IWC‘s younger trainees to prove they are deserving of a spot on the main roster. This year was no exception as this Royal Rumble-style match had numerous memorable moments. Out of the 23-man field, Super Indy Champion Sterling James Keenan drew #1, while “The New Face” Jason Gory came in at #2. A minute later, Shiima Xion entered #3, putting Gory at a 2-on-1 disadvantage. “Spyder” Nate Webb entered #4 and immediately attacked Sterling and eliminated him, the eliminated himself diving over the top rope onto Sterling, an altercation that wouldn’t be finished until their Super Indy Title Match later in the night. Back in the ring, Troy Lords entered #5, putting Gory at another 2-on-1 disadvantage. Jimmy “The Cleaner” DeMarco, better known in Franklin as Jimmy DeeeLicious (all right!), was #6, however the man who’s been targeting him in recent months, the deadly “Mastermind” Jake Garrett was #7, as he quickly disposed of DeMarco, attacking him all the way to the back, this disqualifying himself for refusing to return to the ring. Newcomer Jesse Titan Mark emerged, fittingly from the audience to enter at #8. After unleashing a barrage of Stunners, Jesse T. Mark was Rock Bottomed and tossed by Lords, at which point he quietly returned to his seat to watch the remainder of the show. With Gory the victim of a 2-on-1 attack by Lords & Shiima again, Senior Official Bruce Gray entering at #9 didn’t help matters as he was quickly tossed without much effort. IWC COC trainee Chest Flexor entered at #10 and surprisingly tossed out both Gory & Xion while their backs were turned. “Nice Guy” Mickey Gambino came in #11, followed by two giants, Larry Fury at #12 and Shawn Phoenix at #13. Marshall Gambino drew #14, and together the Gambinos cleaned house, eliminating everyone else, before Sebastian Dark & Super Hentai came out with chairs and laid out the Gambinos with another cowardly assault.

Bubba the Bulldog came in at #15 and since used the previous attack to eliminate both Gambinos and dominate the ring. Blue Lightning at #16 and Chicowitz Mann at #17 both had little luck with Bubba, but #18 was Anthony Kingdom James, leaving the broadcast area to enter the match for the second year straight. Kingdom and Bubba slugged it out in a continuation of their match this past February, as The Deviant, a product of the NEPW promotion in Cleveland, entered #19, followed by Chris Maverick at #20, Dean Radford at #21, the huge Flex Lee at #22 and Jimmy Vega$ entered last at #23. At this point Maverick, Lee, Bubba & Vega$ were the final 4 as Vega$ became a victim of the numbers game, as is typical with Bubba. After hoisting out Maverick with ease, Vega$ outsmarted Flex Lee to eliminate him, leaving just Vega$ and Bubba. Bubba tried to utilize his foreign object again, but Vega$ gained control of it and knocked Bubba out with it. One Cha-Ching Slam for good measure and Bubba was eliminated, allowing Vega$ to finally get a measure of revenge on Bubba.

Fast-paced 6-man tag team action also highlighted the show, as “The Prophet of Profit” Chris Maverick led “Balls Hot” Troy Lords, “Big Daddy of Destruction” J-Rocc and his main charge “Virgin Slayer” Shiima Xion to the ring to do battle with Dean Radford, Dirk Ciglar, and “The New Face” Jason Gory. It was further evidence as to how bright IWC’s future is, and after several minutes of high-speed action Gory scored the pinfall over Xion with the one-man standing Spanish fly, Masochistic Healing.

Before his heated confrontation with Christopher Daniels, “Fabulous” John McChesney was in action as well, taking on the debuting Brad Martin, a 20-year-old prospect who, like so many breakout stars as of late, graduated from Scott D’Amore’s Can-Am training school in Windsor, Ontario. Martin performed admirably but was no match for the highly motivated McChesney, who finished Martin off with a frog splash. That combined with him getting the upper-hand over Daniels, ensured McChesney will walk into Super Indy 4 with perhaps more momentum than anyone in recent memory.

In what will perhaps go down as the most unique, unusual legends match in the history of professional wrestling, the timeless 30-year veteran Lord Zoltan took on infamous manager Kimchee in a rematch from last year’s legends extravaganza. Kimchee started the match stalling, refusing to lock up with Zoltan, instead spending his time talking with newfound manager Anthony Kingdom James who was apparently very busy striking deals backstage. Zoltan had finally had enough, and accused Kimchee of being too much of a chicken to face him, which prompted the hundreds of Franklin fans to join in on the insults. Just then, the infamous Chicken Dance music hits, as everyone in the building starts doing the dance as well. Kimchee was finally motivated to come into the ring, and was quickly pinned following a kneedrop some 15 seconds later. A humiliated Kimchee leaves as the Chicken Dance music continues to play. Rumors that Kingdom James was paid in cigarettes are unconfirmed.