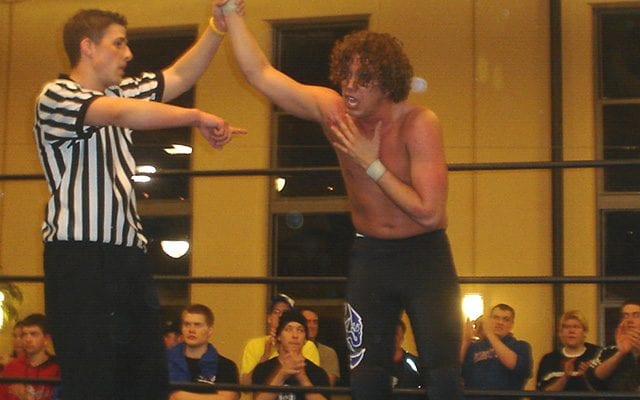 McCHESNEY REACHES THE TOP OF THE SUPER INDY MOUNTAIN

IWC’s 4th annual Super Indy Title Tournament weekend may go down as the most exciting and unforgettable pair of events in IWC history, and already the buzz throughout the internet about what went down has been nothing short of extraordinary.

SUPER INDY TOURNAMENT: ROUND ONE

Tournament action kicked off with two men whose careers have been on tremendous hot streaks, CM Punk and “Fabulous” John McChesney. Punk looked in tremendous condition and clearly brought his best to this prestigious tournament, however it was McChesney using his quickness to surprise Punk with a backslide to earn a hard-fought victory and a seed in the second round.

Even before the night began, it was clear “The Fallen Angel” Christopher Daniels wanted nothing to do with this tournament. After claiming the TNA X Division Title to be more important than IWC’s Super Indy Title, Daniels attempted to leave only to be baited back into the ring by a determined Glenn Spectre. When Daniels returned, he learned what so many in IWC have already found out, that despite the unique attire & behavior, Glenn Spectre was one of the best mat wrestlers in the world today. A befuddled Daniels became desperate, and attempted to use his X Division Title as a weapon, earning him an automatic disqualification. Spectre was announced as the winner, as Daniels left much too upset for someone who allegedly wasn’t concerned with the Super Indy Title.

Things became graphic from there, as “Virgin Slayer” Shiima Xion prepared for the match of his life against “The Notorious 187” Homicide. Despite having one of the best rookie years in recent memory, Shiima was simply not prepared for the viciousness of Homicide. Four bodyslams to the arena floor early solidified Homicide’s advantage. Shiima became desperate and attempted a top-rope corkscrew, however Homicide ducked and Shiima hit the floor with a sickening thud. Despite nearly breaking his back and turning multiple colors, Shiima refused to stay down and refused to go down without a fight. After kicking out of several devastating moves, Shiima was finally downed for good with an intense lariat. Homicide advanced, but Shiima proved to the hundreds in attendance that despite the cocky attitude, Shiima possessed a tremendous amount of desire and heart.

Things did not get any prettier from there, as arguably the most physical & brutal athlete in professionalwrestling today, Low-ki, made his return to IWC to face “The New Face” Jason Gory. It was another example of one of IWC’s young lions persevering through intense pain and punishment to continue battling on. Low-ki’s main weapons in this match were his impactful chops and a series of double-foot stomps to the midsection, including a vertical version of the move that sends opponents flying back into the corner. Gory battled through the pain until his chest was red and bloodied, but in the end The Ghetto Stomp, a top-rope double-foot stomp to the midsection, finally ended the match. Low-ki advanced, but once again, it was one of IWC’s youngest and brightest proving how tough he really was, as Gory was helped to the back amidst a standing ovation.

“Fabulous” John McChesney attempted to become one step closer to his goal of becoming a break-out Super Indy star, but he had to go through a man just as determined as he is, in Glenn Spectre. This match was another testament to the running theme of the night, with young talent proving they can be successful on the next level against higher-profile stars. After an evenly-matched contest, McChesney narrowly edged out a victory following two TKO’s, however this may have been a night that revitalized Glenn Spectre’s career.

It was Low-ki one-on-one against “The Notorious 187” Homicide in a match-up of two men who know each other very well, whether it be as partners or as opponents. The match was as expected, very physical and filled with high-impact offense. However it was Low-ki, scoring the narrow victory setting the stage for the final round.

If John McChesney wanted to achieve his dream of further expanding his career, he had an unbelievable roadblock in his way in Low ki, who was merciless and relentless all night and this was no exception. Low ki once again went to work with vicious chops and stomps to the midsection, culminating with a Ghetto Stomp while McChesney was trapped in the tree of woe. However, even that could not keep Fabulous down who kept kicking out. After Low ki returned to delivering chops, McChesney became enraged and began exchanging chops back and forth center ring with Low ki. Ki was being beaten at his own game and was growing frustrated, so he turned his attentions to trying to choke Fab out. However, Ki held on too long, as McChesney used the ropes to leverage himself over top of Low ki to score the victory and finally realize a goal he’s been chasing his entire career and win a title he’s been chasing since the summer, as “Fabulous” John McChesney has put his name on the map and has won the Super Indy Title!

After the match-up, all the Super Indy tournament entrants with the exception of a frustrated Low-ki came to the ring for the presentation ceremony of the Super Indy Title. However previous champion Sterling James Keenan berated McChesney and refused to relinquish the title. McChesney is the recognized Super Indy Champion yet his battle to possess the actual Super Indy Title belt rages on.

“Balls Hot” Troy Lords had a mission tonight as well: to prove he is one of the most underrated stars in IWC today and in order to prove his point the went one-on-one with IWC World Heavyweight Champion Shirley Doe. Lords, despite utilizing outside interference from J-Rocc numerous times, kept with the running theme of the night, of stepping up to a higher level and proving himself as a top-tier contender, even at one point kicking out of Sillyhead 2, a move that has put away almost every Doe opponent in the past. Doe had another high-impact move in mind however, and after dropping Lords on his head and knocking him silly, he was able to score the 3 count and retain the title, but likely after a much tougher match than he may have expected.

The Midnight Express, “Beautiful” Bobby Eaton & “Loverboy” Dennis Condrey, made their IWC returns to defend the Tag Team Title against the team they beat for those titles: Tracy Smothers & Chris Hamrick, Southern Comfort. Smothers introduced a young lady named Raelene who would apparently serve as guest valet for the evening, however it would be a miscommunication between her & Smothers that led to a Midnight Express title retainage. However, the story here surrounds Sebastian Dark & HENTAI’s continued lack of respect for the entire IWC, its locker room, and its legends, as they attacked Eaton & Condrey from behind before being run off by Smothers & Hamrick.

Also on the show was Sterling James Keenan’s final Super Indy Title defense of his reign was schedule, but an opponent had not been named. Sterling claimed to have already defeated everyone and there was no suitable competition left, however promoter Norm Connors had a surprise in store, as the man he referred to as the best wrestler in Pittsburgh not already in IWC, Justin Idol made his debut to a thunderous ovation. Idol was clearly more prepared than Sterling and controlled much of the match, however just when it seemed Idol was moments away from adding his name to the prestigious list of former Super Indy Champions, Sterling took his title and left, settling for a cowardly count-out victory rather than continue the fight.