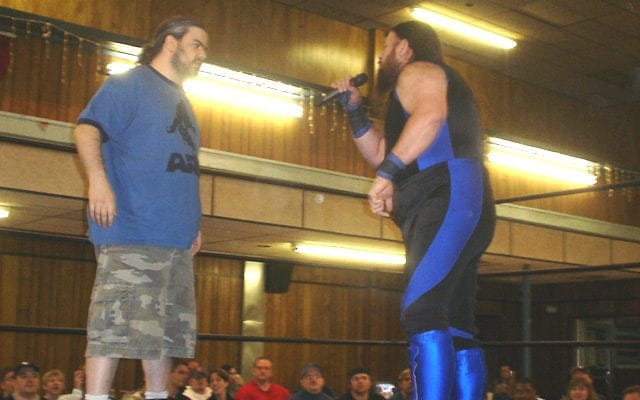 The second half of this unforgettable weekend was headlined by another IWC Title defense, as Doe once again met the one and only Tracy Smothers. Smothers was quick to produce a back-up plan, as he was escorted to the ring by “Balls Hot” Troy Lords & J-Rocc. Smothers wasted no time inciting the crowd to near riotous levels once again, not caring whether he was loved or hated, only caring about the IWC Title. After two prior attempts to win the belt failed, Smothers used all the outside help he could in order to gain the advantage, as Lords & J-Rocc interjected themselves numerous times illegally. Smothers came closer than ever to capturing the championship, scoring several near-falls that appeared would mean the end of the contest. However, tides began to turn as The Gambinos emerged to run off Lords & J-Rocc. Then, with what little energy he had left, Doe was able to catch Smothers off-guard, and roll him over for the three-count, successfully completing arguably the most impressive title defense to date. However, after the match, “Mastermind” Jake Garrett took advantage of Doe’s fatigue, laying him out with a vicious overhead suplex.

Fresh off of the most grueling, yet most rewarding night of his career, “Fabulous” John McChesney, current Super Indy Champion, now had to fight for possession of a title belt that it rightfully his. Sterling’s plan was made clear, as all along he had planned on coaxing a weakened tournament winner into a match-up in order to regain that title without having to defend it three times in one night. However, for the second night in a row, Sterling was faced with competition stronger than the Super Indy Killer had expected. Despite being in an amazing amount of pain, McChesny fought through it all to gain what was rightfully his. Sterling went for a desperation move, as he grabbed that Super Indy title belt to use. Fab countered, and the match degenerated into a brawl from there, eventually ending in a double-countout. Fabulous John McChesney is still the Super Indy champion but he still doesn’t have possession of the title belt.

Elimination rules were in effect as CM Punk, Low ki, and “The Fallen Angel” Christopher Daniels met in a three-way-dance of major implications in the Super Indy division. All three men were still feeling the effects of the previous night’s battles, yet they battled on. Not surprisingly, Low ki, the man who took the most punishment the previous night, was the first man ousted from the contest, leaving Daniels and Punk, a renewal of their classic IWC rivalry from back in 2002. It was a case of Christopher Daniels outsmarting Punk, baiting him in as Punk attempted a shining wizard, Daniels swept the legs into a jackknife pin to score the victory.

Speaking of still feeling the effects, we have to mention Shiima Xion and Jason Gory, who despite taking the beating of their lives just 24 hours before, were right back in the ring doing battle. This time it was tag team action, as Gory teamed with newfound partner Dean Radford to take on Xion and “Wonder Man” Glenn Spectre who in recent weeks has seemed he’d like to be more than just Xion’s tag partner. Both teams functioned well, providing even more of a resurgence to IWC’s tag team division in recent months, but in the end, Radford used his power to Radicate Xion for the victory. After the match, Spectre continued his attempts to get “closer” to Shiima, as his attempts to revive him after the match became quite inappropriate.

In other tag team action, despite Mickey’s facial injuries suffered the night before, The Gambino Brothers renewed their rivalry with “Balls Hot” Troy Lords & J-Rocc. Despite the hellacious assault they had received the night before, Mickey & Marshall were on their way to victory, utilizing the Curse of the Gambino finisher, until a steel chair came into play, robbing the Gambinos of a victory. After the match-up, an irate Marshall Gambino challenged the two to a streetfight next time IWC comes to Uniontown!

Jake Garrett made his return to IWC singles action to settle his long score with the cousin to the Gambinos, Jimmy “The Cleaner” Demarco. Garrett had been signaling out Demarco for months, upset that Demarco was added to the IWC active roster, before Garrett had been permitted to return to the roster following back surgery. Demarco deserves credit for stepping into the ring with someone as dangerous as Garrett, but the Mastermind made quick work of him, sending a clear message to IWC Champion Shirley Doe who was intently watching while doing guest commentary. Garrett called Doe out, and demanded a shot at the IWC Title, which Doe agreed to. However Garrett took a cheap shot at Doe and a brawl erupted in the ring before both men were physically restrained.

Also on the card, Dirk Ciglar went one-on-one with Davey Andrews, a highly praised student from the Ring of Honor training school. Andrews grounded Ciglar with a variety of submission moves, but Ciglar came back to win the match-up following his trademark Swanton bomb.