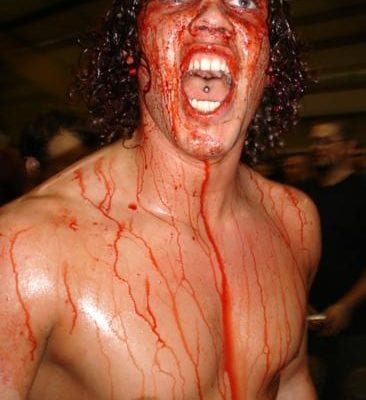 McChesney Elevates Himself One Step Further

xHours before the opening bell ever rang on Friday night, July 1 at the Monroeville Sports Center for “Caged Fury 2” there was already a heightened sense of tension and confusion in the air. Word had gotten out that “The Phenomenal” AJ Styles, scheduled participant in the night’s main event, had unfortunately missed his flight that would’ve transported him from his home of Gainseville, Georgia to the Pittsburgh area. Despite several attempts at finding another flight to Pittsburgh, AJ was faced with the realization that one of the most historic and important matches of his career had just slipped through his fingers.x

Back at the Monroeville Sports Center, Christopher Daniels was left without an opponent. However one man was quick to volunteer to take AJ’s place and battle The Fallen Angel inside the steel cage. It was a man who’s made a career out of challenging and defeating major stars as of late, and a man who was verbally berated by Daniels just a few months ago. That man was Super Indy Champion “Fabulous” John McChesney.

xDaniels wasted little time using his experience to his advantage, dropkicking the cage door, causing it to swing into McChesney’s head, as McChesney was still standing on the arena floor. Fab had no chance to brace himself, and a huge gash was opened on his head as a result. Daniels remained focused on further opening the laceration, raking McChesney’s face across the cage and hitting him with a series of headbutts. Undaunted, McChesney refused to die, rallying back with the same intensity he displayed when he was going blow-for-blow with Low-ki en route to winning the Super Indy Title. Action began to escalate as both men attempted high risks to finish their opponent. After knocking Daniels from the top rope, McChesney, with blood streaming down his body, scaled the top of the cage, and crashed down into Daniels with a hellacious cross body to score the victory. Super Indy Champion John McChesney had defeated TNA X Division Champion Christopher Daniels, and taken one more giant step forward to become the next break-out Super Indy star!x

IWC World Heavyweight Champion Shirley Doe made his 9th defense of his 2nd reign as champion, by battling one half of the Wildcards, “King of Diamonds” Eddie Kingston, who although hadn’t experienced one-on-one action in IWC up to this point, had earned a title shot based on reputation gained elsewhere ever since his xpartner became sidelined with an injury. Before the opening bell, former 2 time WWWF World Champion Bruno Sammartino entered the ring to wish both men luck in this all-important bout. The contest was one of the most physically intense championship defenses in quite some time, with Doe’s championship in jeopardy for quite sometime, thanks to Kingston targeting Doe’s knee, a well-known place of prior injury. However, Doe demonstrated his ability to adapt and compensate, by making a comeback and managing to retain his championship thanks to a shining wizard.

xTracy Smothers and Chris Hamrick had their sites set on regaining the IWC Tag Team Titles from arguably the most disrespectful and undeserving team in company history, Sebastian Dark & HENTAI. However, before they turned their focus toward the champions, Smothers had a message for another disrespectful name in the business. Much like he has on the Internet in recent weeks, Smothers issued an open challenge and a few disparaging remarks to WWE star John Bradshaw Layfield, as a result of Layfield’s cowardly attack on the Blue Meanie at the recent ECW One Night Stand PPV, which Smothers was a part of. Smothers offered to put all of his possessions on the line just for the chance to fight JBL, a speech that earned him a standing ovation from the crowd on hand.
x
However, after that it was down to business at hand, as Smothers & Hamrick attempted to defeat Dark & HENTAI. Knowing full well Dark & HENTAI’s tendency to sneak attack and break rules, Southern Comfort beat them to the punch, instigating a 4 man brawl that went around the entire building. Tracy & hamrick were determined to not only win the titles, but to avenge the sneak-attack & illegal tactics Dark & HENTAI had used against the legendary Midnight Express some weeks earlier. However it was the chaotic nature of the match that eventually did them in. After several minutes of back-and-forth action, Dark & HENTAI found an opening, illegally reversed a pin attempt, and thanks to that and a pull of the tights from HENTAI, the tag champions had retained the gold. However, Southern Comfort wasn’t content with that tainted loss, and speculation is already underway of a rematch in the works for July 29.
x
While the actual Super Indy Champion John McChesney defied the odds to win Caged Fury, the self-professed Super Indy Champion Sterling James Keenan was continuing to make his false claims to the gold. Despite not winning Super Indy 4, Sterling has still refused to hand the belt over to McChesney, and as a result issued an open challenge to anyone in the locker room to compete for the alleged Super Indy Title he xclaims to possess. Answering the challenge: the former 2 time IWC Champion, the powerhouse Jimmy Vega$. Vega$ fought through the battle with an incredible amount of pain, thanks to SJK’s relentless targeting of Vega$’ left knee. Vega$ battled through the pain, and even connected with the Cha-Ching Slam, but the damage to his knee left him too immobile to follow through with an immediate cover. As Vega$ recovered, SJK reached for his secret weapon, a pair of brass knuckles, nailed Vega$ and picked up a tainted victory, in his eyes to retain a championship he doesn’t even lay claim to any longer.
x
The war to determine IWC’s 2004 Newcomer of the Year rages on with the Dream Partner Tag Team Match. Shiima Xion teamed with the master of the “Canadian Destroyer”, Petey Williams to battle Jason Gory and his choice for a partner “The Fxuture” Chris Sabin. The contest had 2 equal combinations: two pairs of individuals who broke into the business together, trained together, and have branched out to reach success together, albeit on separate sides of the ring. While the buzz heading into the battle may have been on Sabin & Petey, it was Xion & Gory took center stage, as the Canadian Destroyer didn’t end the match-up, yet the Filipino Destoyer – a reverse From Lust To Dust – spiked Gory into the mat head-first, leading to an easy victory from there. However, the beat-down continued on an unconscious Gory until Sabin made the save, dropping both Xion & manager Chris Maverick with the Cradle Shock. Petey’s attempts to intervene with a Canadian Destroyer were countered with a Cradle Shock as well. Although Xion scored the pinfall, it’s clear that the war to determine who really is IWC’s brightest rookie rages on.
x
Superheroes collided as “Wonderman” Glenn Spectre took on Chris Hero, the man who still claims to have never lost a match in his entire career. The match started with Spectre in complete control, using his mind games to psych Hero completely out of the ring. However, once Hero regrouped and met Spectre with a right hand to the jaw, the match became much xmore serious. Spectre was able to match Hero in the technical aspect of the match, and was even able to match Hero when it came to delivering cravates. Not only that, Spectre survived the Hero’s Welcome, thus continuing to build from the momentum Spectre started gaining back at Super Indy weekend. But it was one version of the cravate that Spectre hadn’t scouted quite enough, Hero’s Hangman’s Clutch that left Glenn Spectre no choice but to tap out. Spectre did not come out victorious, but was quick to challenge Hero to a rematch at a later date.

xTwo separate rivalries collided in six-man tag action as Mickey & Marshall Gambino joined forces with their cousin Jimmy DeMarco to battle “Balls Hot” Troy Lords, “Big Daddy of Destruction” J-Rocc, and the ever-menacing Jake Garrett. The Gambino Brothers concentrated on their issues with J-Rocc & Lords, while Garrett singled out DeMarco as usual, in his on-going quest to eliminate him once and for all. DeMarco showed no fear in standing up to Garrett, but DeMarco fell victim to a Devastator and was pinned by Garrett. Not only xhas Jake Garrett used DeMarco to send a message that he’s back and more dangerous than ever, he’s taken another step in proving he deserves what he craves, an IWC World Title match against Shirley Doe. As for J-Rocc & Lords, they weren’t satisfied with just a win, as they attacked the Gambinos with chairs following the match, then tried to set up a table. The Gambinos countered, and it was J-Rocc who ended up going through a table thanks to a Superbomb from Marshall “The Bull”. J-Rocc left the ring an injured man, but things have only escalated leading into what is sure to be more chaotic matches between the four.

xDean Radford met Claudio Castagnoli one-on-one with the victor receiving an upcoming title shot at the IWC Super Indy Title currently held by John McChesney. On one hand, was an internationally proven commodity likex Castagnoli, who’s made a name for himself in various independent promotions in the past year. On the other side is Dean Radford, still climbing his way back to the top, trying to re-attain the glory he had reached before his tragic neck injury. However, Radford may not have been ready for someone like Double C, who could more or less match Radford when it came to power moves. After surviving Radford’s devastating spine buster, as well as several other high-impact moves, Claudio trapped Radford in a variation of a straight-jacket sit-out powerbomb to score the win and an eventual Super Indy Title show.

Also making an appearance was Bubba the Bulldog, still carryixng his trophy that he claims makes him the greatest wrestler to ever come out of Pittsburgh. However, rather than target some of Pittsburgh’s most established veterans like he has in the past, Bubba directed his anger toward the rookies of IWC, and challenged any one of them to a match. Accepting the call was big John Bolin, the winner of TNA’s Gut Check Challenge in 2004, who already comes from an impressive athletic background, xincluding 2 years as a college football All-American, as well as possessing the state record in the 275 lb. class bench press (670 lbs.). Bubba was clearly underestimating Bolin, who pulled off the upset of the year, when he defeated Bubba with his side slam into a urinage variation. Bolin won the match, and the trophy, which was however smashed to bits on the entranceway after the match, much to the chagrin of a still irate & dumbfounded Bubba.

Also on the show was the continuing adventures of Jesse Titan Mark, the young IWC trainee who seems to not be able to resist channeling the spirits of past and present wrestling stars whenever he’s in a wrestling ring. This time around, as fellow trainees Chicowitz Mann & Chest Flexor attempted to perform minor repairs to the ring, Jesse Titan Mark morphed himself into Kurt Angle, assaulting his fellow trainees with suplexes, Angle Slams, and the Anklelock submission, all while Angle’s WWE entrance music blared on the sound system. After the music stopped, Jesse Titan Mark returned to his normal state, and proceeded to help the men he just assaulted to the backstage area.