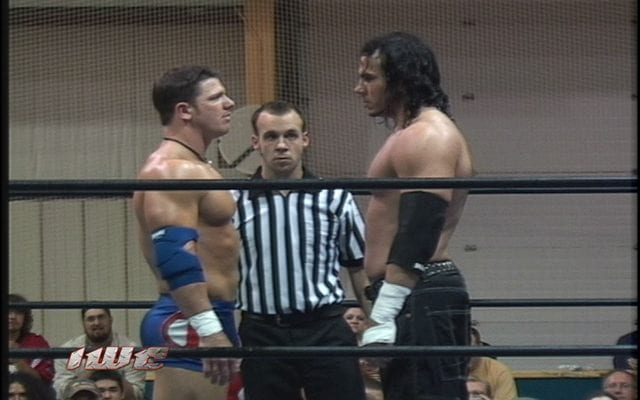 A Match for the Ages

xIWC’s No Excuses live event was capped off by the most anticipated main event in IWC’s history, as well over 600 fans witnessed a truly spectacular match. Former 3 time NWA World Heavyweight Champion “The Phenomenal” AJ Styles stepped into the ring with the most controversial man in wrestling today, Matt Hardy. This xwas the first, and quite possibly last ever meeting between the two. Action started with an extended feeling out process but soon escalated into a dramatic back-and-forth war that had fans standing in excitement. Both men’s signature moves, AJ’s Styles Clash and Matt’s Twist of Fate, played an important part in the match as both moves were used by their namesakes and also by their opponent, but nothing was able to lead to a 3 count. AJ, for the first time in IWC history, even attempted the dangerous Spiral Tap, but Matt was able to move out of the way. After a near 30-minute epic, AJ trapped xHardy in an Oklahoma Roll for the 3 count. After the battle, both men expressed a sincere appreciation and respect for each other, ending an unforgettable match with a truly classy moment.

IWC Champion Shirley Doe was determined to pull out all stopxs, to bring back the “old Doe” of sorts, in order to more soundly defeat “King of Diamonds” Eddie Kingston, who seemed to give Doe a tougher fight than he has expected at their initial match at Caged Fury 2. Kingston had no problem with this, as he met Doe in the aisle way and brawled all over the building. Back into the ring both men continued the battle, and amazingly coming back from every high-impact move. It took 3 shining wizards to phase the King of Diamonds, before the Sillyhead 2 finished him off. Following the match, we were greeted to a special surprise appearance from ESPN Radio 1250 personality & former WCW commentator Mark Madden who entered the ring to pay special tribute, along with the rest of the locker room, to Doe who was celebrating not only a successful title defense but a birthday as well. Another xclass-act moment on IWC’s most anticipated show to date.

Claudio Castagnoli claims to be IWC’s best dressed xwrestler but it was clear Super Indy Champion “Fabulous” John McChesney wouldn’t let Double C enter this match with any kind of a mental edge. Coming to the ring clad in a full suit, McChesney made it clear he could match Claudio when it came to fashion sense, and was about to prove it in the ring as well. Double C had the size and power advantage and was able to manhandle McChesney but Fab was able to use hit and run offense to take control of the action and score a pinfall with a top rope legdrop. Axfter disposing of Double C, Fab sent out a message to Sterling James Keenan, the man that still possesses the Super Indy Title belt that is rightfully McChesney’s. Fab hasn’t lost his focus on being able to physically hold the championship belt he fought to earn for months upon months and nothing will stop him from reaching that goal.
x
A major story coming out of “No Excuses” was the debut of KUDO from DDT Pro in Japan and the events surrounding it. KUDO left a lasting impression on IWC fans, obliterating Jimmy “The Cleaner” Demarco with a series of hard kicks and finally a double knee drop from the top rope en route to a victory. However, after the match, things got worse for the young Gambino cousin, as Troy Lords & J-Rocc emerged from the back and delivered a 2-on-1 assault to Demarco, ending when they placed Demarco’s arxm onto the ring steps and smashed a chair into it. Demarco was immediately rushed to the hospital, and his cousins Mickey & Marshall Gambino, who were not yet at the building due to having a “job” to take care of, were quickly informed.

Mickey & Marshall made their way into the building later that night dressed in street clothes & looking for a fight. Lords & J-Rocc, who hadx “won” their match with the Gambinos via countout/forfeit thanks to Mickey & Marshall being at the hospital with Demarco, met them in the aisle way and chaos erupted between all 4 men. Jake Garrett only added to the carnage when he appeared with a chair, knocking down both Gambinos. The brawl had turned into a 3-on-2 mugging until Dean Radford appeared to even the odds. A Garrett/Radford brawl ensued before the aforementioned Dark/HENTAI/Southern Comfort involvement occurred.
x
An 8 month rivalry over who IWC’s star rookie is came to a head when “The New Face” Jason Gory and “Virgin Slayer” Shiima Xion faced one last time, with the winner being officially recognized as the winner of IWC’s 2004 Newcomer of the Year Award (both had tied in the fan polling early this year). It was a battle to prove themselves to their peers, their trainers, and their fans, and perhaps most importantly themselves. Based on their training together and on their numerous past matches, it was clear both men knew each other inside and out and neededx something different to come out on top. The man to provide something different tonight was Jason Gory, who was victorious thanks to a unique variation of a tombstone piledriver. After the match, a defeated Xion, along with “The Prophet of Profit” Chris Maverick, seemed to be humbled and seemed to be willing to bury the hatchet. However, as soon as Gory turned his back on Xion, Shiima knocked him out with his Filipino Destroyer, the reverse From Lust 2 Dust, to get the last word over Gory, who despite being knocked senseless, is officially IWC’s Newcomer of the Year.
x
Bubba the Bulldog made a surprise appearance, speaking about his match with Bolin from Caged Fury 2, which ended with Bolin amazingly defeating Bubba and smashing his trophy afterward. Bubba said he needed to thank Bolin for reawakening the old Bubba the Bulldog thanks to that loss, and called Bolin to the ring to shake his hand. Bolin appeared and obliged, but shockingly local legend “Beef Stew” Lou Marconi came out of a 5 year retirement to attack Bolin from behind with a chair. Both men double-teamed the TNA Gut Check Winner, but Bolin soon recovered, with Bubba & Marconi escaping before any damage can be done. The question now is hoxw did Bubba track down Lou Marconi and why has he come back to the xPittsburgh wrestling scene?

For the first time in IWC history, female competitors graced the ring as part of a mixed tag. Glenn Spectre teamed with Japanese sensation Sumie Sakai to take on Chris Hero & Daizee Haze. However, action turned from a Mixed Tag Match into an Intergender Match, with Hero & Haze freely going back and forth punishing Sakai. Sumie was finally able to tag Spectre, and Hero was forced to face what he’d tried to hard to avoid: stepping into the ring with Glenn Spectre one more time. Spectre was able txo avenge his loss from the previous meeting, as although hero kicked out of the Crock Bottom, he was still trapped and pinned by Spectre, who still is one of the best mat specialists in the game.

Two Midwest standouts made their debuts as Delirious took on Matt Sydal. Both men have made a name for themselves based on the unbelievably competitive matches they’ve had with each other, matches that have taken them to heights as far as TNA and ROH. Tonight was no different, as the IWC fans became just the xlatest in a long line of crowds Sydal & Delirious have won over. Tonight it was Delirious defeating Sydal with the Chemical Imbalance. Delirious celebrated amidst chants of “Please Come Back” for both men.

Also at No Excuses, the continuing adventures of Jesse Titan Mark, the huge fan/trainee that loves re-enacting memorable moments of his favorite wrestlers. Tonight, Mr. Mark showed up in a Matt Hardy T-shirt, complete with entrance music and hand gestures. Naturally, Matt Hardy(‘s imposters) has been banned from buildings all over the nation and security was quick to tackle him to the ground, arrest him, and eject him from the area. However, before he was taken to the ground, Jesse was able to grab the microphone and plug his upcoming plans involving another wrestling organization…yes, folks, he’ll be watching Raw this Monday night.