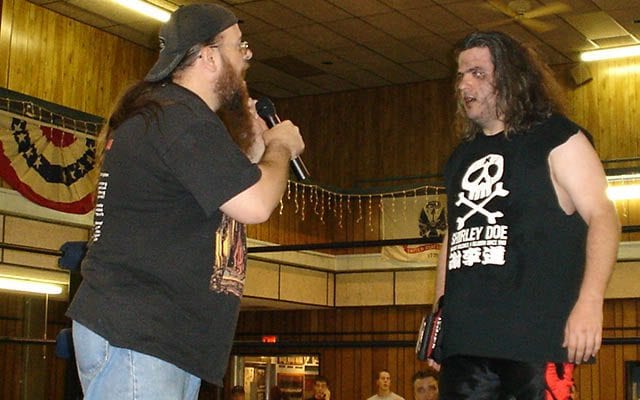 Doe is triumphant, but has Jake Garrett masterminded the end of his title reign?

xIWC Showdown in U-Town 3 on Saturday, August 13 at the Uniontown VFW was the location of the biggest match in the lift of young “Virgin Slayer” SHIIMA XION, as he challenged SHIRLEY DOE for the IWC World Heavyweight Title. Before match time, Shiima treated us to his version of a “fashion show”, modeling various IWC-related T-shirts, however the stalling tactics did little to alter Doe’s gameplan and if anything, energized him even further for the match. To anyone who may have doubted Shiima Xion deserving a chance at the IWC Title, this effort was more than enough to discredit any detractors. Moreso than that, it proved Xixon had what it took to hang in the ring with one of the toughest most physical individuals around. Xion even at one point came within inches of winning the title, after hitting the champion with an amazing second-rope From Lust 2 Dust. Amazingly, Doe found enough strength to kick-out of the ensuing cover and fight his way back to a victory, although he didn’t do it alone. JAKE GARRETT, who won a #1 Contender’s Match via forfeit earlier that night over DEAN RADFORD (who still has yet to be seen or heard from since being attacked and xhauled away in a car trunk by Sebastian Dark & HENTAI 2 weeks ago on IWC Ignition TV) was doing guest color commentary for the match, and as soon as Xion’s manager “The Prophet of Profit” CHRIS MAVERICK got involved, Garrett was quick to run to ringside and assault Maverick, leaving the match one-on-one. Xion was distracted by the incident, which was enough to lead to an opportunity for Doe to hoist Xion onto his back and drive him head-first into the mat for the victory, a move identical to one seen during Doe’s training for the match on IWC Ignition TV. It’s clear Jake Garrett wants Doe to hold onto that title until he challenges for it on November 19. Jake wants to defeat Doe and Doe alone, and won’t settle for anything else. The deal was sealed that night with a handshake, but one has to wonder exactly what The Mastermind is plotting on his way back to Uniontown November 19.

xSTERLING KEENAN, the man that still possesses the Super Indy Title belt which officially belongs to “Fabulous” JOHN McCHESNEY, stepped into the ring for the second time with “The Phenomenal” AJ STYLES in a re-match from their battle last February which saw Sterling come out victorious thanks to assisstance from CHRISTOPHER DANIELS. This night, however, it was one-on-one at last. Much of the match saw the recent ROH and 1PW roster addition punishing the neck of the Phenomenal One, naturally setting up for the devastating MK Ultra. AJ battled back however and debuted a new finisher in IWC, a torture rack turned into a spinning power bomb to pick up the win and even his series with Sterling. Sterling now has to focus on Friday, August 26 where he challenges John McChesney for the very same Super Indy Title that he has refused to relinquish for all these months. Meanwhile, AJ will take on the “Samoan Submission Machine” SAMOA JOE in a rematch from their recent war at TNA’s Sacrifice PPV.

The Fans Bring the Weapons Uniontown streetfight was even more violent and barbaric than expected, as MICKEY & MARSHALL GAMBINO took on “Balls Hot” TROY LORDS & “Big Daddy of Destruction” J-ROCC, collectively known as THE OHIO PLAYERS. Numerous innovative weapons from a mailbox to an oar, inx addition to your regular dose of solid steel, came into play. Mickey was even able to retrieve a staple gun, driving several staples into J-Rocc’s head early on, busting him wide open. Lords was also on the receiving end of an amazing amount of punishment, and had a severly busted mouth as well. The Players played through the pain and gave the Gambinos one of the most hardcore matches in IWC history, but as time went on and more blood was lost, The Gambinos gained control and were moments from xvictory. The increasingly-insecure Lords was growing irate over the potential of losing such an important match to a pair of lesser experienced athletes he had no respect for, so he grew desperate. Lords located JIMMY DEMARCO, who was watching on backstage while nursing the broken arm he suffered at the hands of Lords & J-Rocc, and dragged him out to ringside, threatening to break his arm again unless the Gambinos laid down and let The Ohio Players defeat them, something Lords has been craving since the beginning of this rivalry. With no other choice but to save their cousin’s health, the Gambinos let a near-unconscious J-Rocc get the pinfall and victory. However, after the match ended, Lords still got in a cheap shot on Demarco, further damaging that arm, a totally classless act. We’ve seen the most brutal war from these 4 men yet, but after what Troy Lords did, it certainly won’t be the last.

xThe man known as BOLEN, Uniontown’s hometown hero, stepped into the most important situation of his young career, facing the 10 year veteran BUBBA THE BULLDOG. Bubba made sure to voice his displeasure for Uniontown early and often throughout the night, adding further rage inside the former college football All-American Bolen. With his hometown crowd behind him, Bolen was able to upset Bubba yet again, pinning him following his patented belly-to-back into a sideslam, making him 2-0 here in IWC. However, “Beef Stew” LOU MARCONI, fresh off of defeating young Cleveland-area prospect THE DEVIANT earlier in the night, was in the ring seconds after the pinfall, attacking Bolen until Bubba recovered, making it a double team. The success was short-lived and Bubba’s strength in numbers did not pay off this time, as Bolen raxn both men off then celebrated in front of his hometown fans.

Japanese sensation KUDO continued his impressive ways against newly-crowned 2004 IWC Newcomer of the Year “The New Face” JASON GORY. KUDO brought out the same intense style as we saw in his debut against Jimmy Demarco, but Gory was better able to adapt, having been in the ring with the likes of similar-styled wrestlers such as LOW-KI in the past. One thing he couldn’t prepare for is something used very rarely, a reverse huracanrana, which set The New Face up perfectly for KUDO’s double knees off the top to get the win.

Also on the card was a “Proving Ground Match”, an opportunity for 2 highly-touted young athletes to prove thexy belong among IWC’s elite. In one corner was RAYMOND ROWE, a master of suplexes perhaps most famous for once T-Bone supexing a 420 lb. man taking on a great young prospect from here in the western-Pennsylvania area, “Hot Property” JASON CAGE. It was Cage’s first exposure to the IWC audience, but admittedly it may not have been his best, as he was noticeably bewildered by the unreal ability to absorb pain that Rowe possessed. Nothing Cage could to could keep the powerhouse down, including a second-rope variation of the Canadian Destroyer. Raymond Rowe scored the emphatic win that night but credit has to be given to Cage, who not only had to overcome the pressure of competing in the most high-profile match of his career, but had to do so against an unstoppable machine like Rowe.