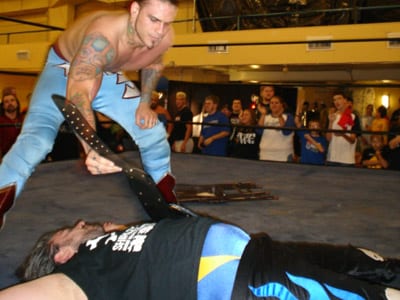 xIWC Summer Sizzler 2, Friday, August 26, was cappexd off with perhaps the most important IWC Title defense yet for champion SHIRLEY DOE. His never-ending quest to make the IWC Title viewed with worldwide prestige and importance has taken him to Japan and back, and through a total of a dozen defenses, has not only helped the IWC Title become more important than ever, but has taken Doe to the status of arguably the greatest champion in IWC’s 4 and a half year history. On this night, he was opposed by another champion dead-set on increasing the worldwide prestige of the promotion he xrepresents, “King of Old School” STEVE CORINO, who carries the AWA World Title and its 45 year lineage along with him. Furthermore, Corino’s top student and protégé, RICKY LANDELL was at ringside, adding every physical interjection he could, while #1 contender to the IWC Title JAKE GARRETT lurked ominously near the entranceway, giving a definite psychological advantage to Corino as well. However, the champion’s fighting spirit kept him in the fight, and Doe was successful in his biggest championship win yet, scoring the win with Sillyhead 2. However, after the battle, STERLING KEENAN interrupted Doe’s celebration with a brutal chairshot and dragon suplex. With his Super Indy division exploits not going as planned, Sterling seems to have his sights setx back on the IWC Heavyweight Title.

However, before Sterling’s assult on the champion, he had to worry about “Fabulous” JOHN McCHESNEY, whom he defeated to regain the Super Indy Title one xweek ago at a Ring of Honor event in New Jersey. McChesney’s first title reign came and went without ever once being able to grasp the actual title belt as his own. However, Sterling wasn’t able to build enough momentum to begin another Super Indy Killer streak…John McChesney finally defeated SJK to gain the victory he’d been after for four months. McChesney was presented with the title belt Sterling had carried as his own since last year, however the moment was brief, as McChesney had a brand new belt to represent the Super Indy division and the amazing work and dedication that has propelled John McChesney to the top.
x
Certainly the tag team situation has been escalating over recent months as well, with champions SEBASTIAN DARK & HENTAI doing everything in their power to score cheap victories and disrespect some of the greatest legends to ever pass through IWC. Dark’s blatant use of a ladder as a weapon at “No Excuses” to prevent what would’ve been a sure-fire pinfall after CHRIS HAMRICK’s Southern Bellringer, led us to this match pitting the champions against Hamrick & TRACY SMOTHERS, where the ladder would be lxegal to use in any way imaginable. The match was as brutal and intense, if not moreso, than their previous encounters, with not only a ladder but chairs and a table as well coming into play. Every sickening thud to accompany the chair & ladder shots seemed to pale in comparison, to the unbelievable high-risk ending to this match, which will go down as one of the gutsiest and most amazing moves IWC has ever seen…With Dark unconscious on a table, and Smothers supporting the ladder, Hamrick prepared to deliver the craziest Southern Bellringer of his career, from the ladder, onto Dark & the table, and needless to say, despite the resilience the champions have shown in recent months, there’s absolutely no way out of the Southern Bellringer, and Tracy Smothers & Chris Hamrick are now 2-time IWC Tag Team Champions.
xxxx
It was a highly-anticipated rematch when “The Phenomenal” AJ STYLES stepped into the ring against “The Samoan Submission Machine” SAMOA JOE. Although the 2 had never met in IWC before, this was a rematch from their battle 2 weeks ago on the TNA Sacrifice PPV. Joe has been unstoppable in recent times, undefeated in TNA, undefeated in IxWC, and is the only man to make AJ Styles cleanly tap out inside a TNA ring. On this night, the amazing streak continued, as he not only kept his IWC undefeated streak in tact, but became the first man to ever make AJ Styles submit inside of an IWC ring. It was that devastating choke sleeper, the Kokina Clutch, with his entire 270 lb frame firmly controlling Styles, The Phenomenal One had no choice but to tap out. Following the match, however, Joe made it clear AJ will get another chance against him, and AJ made it clear the result would be much different.
x
After “Balls Hot” TROY LORDS broke the arm of JIMMY DEMARCO on two separate occasions, in the process forcing Demarco’s cousins MICKEY & MARSHALL GAMBINO to lay down and lose their match to Lords & J-ROCC at Showdown in U-Town 3, the war between the two teams officially stopped being about in-ring battles and became a matter of personal humiliation. It was with this mindset that IWC officials sanctioned one final match between the two teams in a “Losers Wear a Dress” match. Ironically, it was Lords tactics that got him the win in Uniontown, that came back txo haunt him tonight. Jimmy Demarco interjected himself into this no-disqualification match-up, allowing his cousins to set up The Curse of the Gambino to win the match. At intermission, a frustrated Lords & J-Rocc were forced to pose for pictures with IWC fans, meanwhile “Virgin Slayer” SHIIMA XION along with his manager “The Prophet of Profit” CHRIS MAVERICK made their way towards the Ohio Players at ringside as well, and a fistfight soon ensued between Xion and Lords. J-Rocc, instead of saving his partner, joined in on the attack on Lords, with Xion even hitting From Lust 2 Dust. A betrayed Lords was gingerly helped from ringside, but the question is what has motivated J-Rocc to turn his back on Txroy Lords?
CLICK HERE FOR PHOTOS OF J-ROCC & LORDS IN THEIR DRESSES WITH IWC FANS

“Wonderman” GLENN SPECTRE continued his string of battling fellow technical mat masters, as fresh off his win over CHRIS HERO last month, Spectre was now opposed with ROH standout CHAD COLLYER. xCollyer brought his no-frills, focused attitude into play, centering his attack on Spectre’s knee and attempting to force the Wonderman into submission with his patented Texas Cloverleaf. Glenn was able to escape the hold and despite possessing only one uxseable leg, caught Collyer with a surprise roll-up for 3, continuing the huge wave of momentum he has been experiencing lately.

The #1 contender to the IWC Title, Jake Garrett, has begun preparation for his xtitle shot this November in Uniontown. We’ve seen Garrett absolutely dominate everyone he’s been in the ring with since his return early this year, and such was the case tonight when Garrett battled the young upstart from the Cleveland, Ohio area THE DEVIANT. Deviant tried to use his power edge to take control, but wasn’t a match for the toughness or the mental edge of Garrett. The Mastermind finished off The Deviant with his devastating forearm “The Hammer of the xGods” for a very convincing victory. However, much like Garrett was in the main event, Champion Shirley Doe was scouting his future challenger while sitting in on guest commentary, making sure he’s fully prepared for the physicality that well ensue when these two finally collide.

Shiima Xion was looking tox get back on track following less than desireable outcomes in matches with JASON GORY and IWC Champion Shirley Doe lately, but he too was faced with a ROH stand-out, the double-tough Brit, NIGEL McGUINESS. Xion, despite lacking considerable size, was his usual smug self, taking time to even sneak in a photo opportunity, complete with hairspray and the famed Dreamachine vest. But it was Nigel who, much like Samoa Joe, kept his IWC undefeated streak in tact, knocking Xion outx with a vicious lariat to get an emphatic victory.

xJason Gory stepped into the ring with DDT Japan star KUDO in a rematch from Showdown at U-Town 3. Both men came into this contest much more prepared and much better-scouted than beforehand, leading to an entirely different mindset as opposed to before. Gory attempted to beat KUDO at his own game, by using the same backwards huracanrana that KUDO used on Gory en route to defeating him. However, with that more not being a regular part of Gory repatoire, it couxld only do so much. KUDO recovered, and he too remained undefeated in IWC, thanks to the double knees from the top that no one has gotten up from yet.

JASON CAGE, former holder of various titles across West Virginia & Ohio, made his second IWC appearance in hopes of one day capturing similar success. His opponent was Steve Corino’s top prospect Ricky Landell, a man who’s been across the country and the planet, and no doubt will one day be recognized on xthe same level as Corino. But on this night, Jason Cage was determined to rebound from his debut and use this occasion as his rightful ‘proving ground’. Cage lit up Landell with knife-edge chops so vicious, they rival those of the likes of Hamrick or Benoit. After a brutal match, Cage tightly locked in a Fujiwara armbar, forcing Landell to tap out or risk a separated shoulder. Jason Cage has now gotten off on the right foot here in IWC, and is looking for bigger and better success.