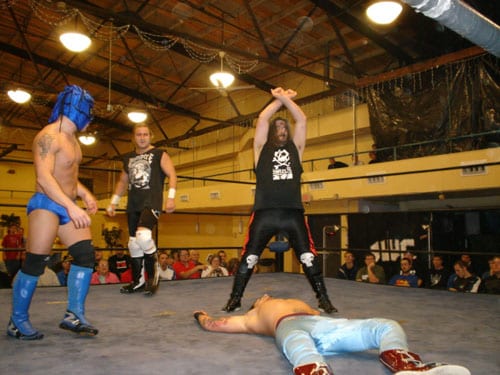 Did Doe decide then and there to plot the destruction of IWC to teach them a lesson for reprimanding him? It’s frightening to think that all the violence, all the carnage, and all the disgust thesex 3 have had for each other over the years…was perhaps all premeditated and done with a collective future goal in mind.

The question now is can the IWC roster rebound from such a crippling blow?

xSHANNON MOORE came into McKeesport looking to prove what he can do shackle-free. Now as “The Prince of Punk” and embracing the “2 B Me” philosophy, Moore was indeed his own man, but was opposed by someone who’s been on an absolute roll in 2005, Super Indy champion “Fabulous” JOHN McCHESNEY. Moore had an impressive showing, and even hixt McChesney with his signature move the Mooregasm, but not even that could keep the champion down. McChesney displayed his unbelievable resilience, fought back, and trapped Moore into a pinning predicament following a huracanrana to retain his title.

MICKEY & MARSHALL GAMBINO had a chance to solidify their status as #1 Contenders to the IWC Tag Team Titles by taking on oxne-half of the reigning champions TRACY SMOTHERS, and his partner for the night, the returning SPYDER NATE WEBB. It was another unforgettable entrance by Webb, complete with a rendition of Billy Joel’s “The Piano Man” and of course plenty of dancing from Webb & Smothers. Once the bell rang however, “Nice Guy” Mickey and Marshall “The Bull” made sure the match was all business. Already no-doubt agitated over not receiving a tag title shot on this xnight, The Gambinos effectively took their anger out on their opposition, pinning Nate Webb following The Curse of the Gambino. Following the match, Smothers blamed his partner for the loss and guaranteed that next time he was in McKeesport “Everybody dies!”

“Virgin Slayer” SHIIMA XION was the first obstxacle in the path of “Balls Hot” TROY LORDS’ newfound singles career, since being stabbed in the back by J-ROCC this past summer. However, despite being battered, bruised, and bloodied by the end of the match, somehow Xion found a way to hit From Lust 2 Dust to get the win. Lords had solidified himself as a potential major player in singles competition, showing he can hang with Xion, who’s been the subject of much fanfare and exposure lately. And although Lords wasn’t victorious in this match-up, he still had to have left the building feeling quite satisfactory.

The last remaining remnants of the Ohio Players/Gambino Brothers xsaga took place in the form of J-Rocc vs. “DeeeLicious” JIMMY DEMARCO, cousin of the Gambinos. The much more powerful, more experienced J-Rocc had the situation well in control when he let his ego get the better of him. Rather than hit the One Hitter Quitter to finish Demarco, he instead chose to slap him around and toy with him. Finally after J-Rocc was ready to finish him off, Demarco trapped him in a crucifix, rolling him over to score the upset win. An irate J-Rocc attacked Demarco after the mxatch, but was run off by the Gambinos. J-Rocc thought he was out of dodge when from behind, Troy Lords re-emerges and sends J-Rocc right back into the line of fire, so he can feel The Curse of the Gambino.

“The New Face” JASON GORY emphatically returned to the win column and against a very impressive foe, former CHIKARA Young Lions Cup winner “Sweet & Sour” LARRY SWEENEY. Allegedly at stake was Sweeney ICWICWA Texarkana Television Title, which he allegedly has held 5 times although the xvalidity and recognition of that belt is very highly in doubt. With that in mind, imagine the surprise of Sweeney when Gory hit one of his many innovative high-impact moves, Trepidation, to score the pin and win the title! Gory celebrated the victory throughout the night, including at our merchandise tables during intermission. It was at said tables where Sweenexy rolled Gory up from behind, a referee counted to 3, and Sweeney announced he had regained the belt because of 24/7 rules. Regardless of that questionable altercation, an outstanding night for both men.

CHRIS HERO and “King of Diamonds” EDDIE KINGSTON had perhaps the most physical bouts of the night. Both men were consitently laying into each other with vicious chops, forearms, and headbutts but neither man would stay down. It was Chris Hero, after several minutes of punishment, who found that second burst of adrenaline and waxs finally able to finish off Kingston after 2 Hero’s Welcomes.

With BUBBA THE BULLDOG claiming he’d already beaten BOLEN, Bubba continued his open challenge of facing newcomers by battling “Hot Property” JASON CAGE. Bubba once again had trouble with a newcomer, and resorted to using a foreign object on the promising upstart before the referee discovered it and ordered a disqualification. Bubba’s rampage continued however, until Bolen came down to confront his rival. However, that too was short-lived, as of all people J-Rocc came out to watch Bubba’s back. Bubba and J-Rocc seem to be two men who love to have allies on their side, therefore seem to have the potential to fit together extremely well. However, after this attack, a match was signed for November 19 in Uniontown, Pa…Bubba & J-Rocc facing Bolen and KING KONG BUNDY!