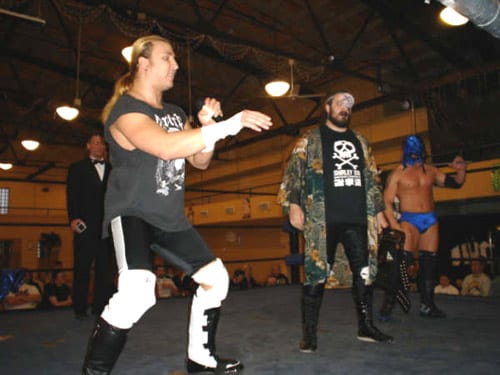 Dennis Gregory made his long awaited return to an IWC ring, following an entire year of fighting for his country overseas. Gregory made it clear that, much the same way he fought for his country, he was going to step up and fight for his promotion. A sickening chairshot from Doe to Gregory caused an immediate disqualification in their championship match, but the IWC locker room had another trump card.

Longtime IWC referee “Colorblind Ref” Bruce Gray appeared out of nowhere and announced he had been promoted to a position of authority within the IWC hierarchy. Gray’s first ruling was to restart the Doe/Gregory championship encounter, however this time flagrant interference from Dark & HENTAI led to yet another disqualification. Finally, Bruce could take no more, as he began rallying the troops, and one by one members of the IWC locker room stepped up to the plate and fought for the promotion they believed in. As more and more bodies emptied from the back, Doe and his charges were steadily driven out the back door but not before quite a bit of damage had been done.

Doe, Dark, and HENTAI’s crusade to mold IWC into their own personal playground has been thwarted for now, thanks to men like Dennis Gregory, Radford, Sterling, Gray, and the rest of the locker room, but unfortunately they will be back, they still the power that comes with being IWC Champion, and this war is far from over.

In other action, it was a battle of two undefeated Super Indies, when “The Future” Chris Sabin, who has never been defeated via pinfall in his TWO YEAR tenure in IWC, took on “The Samoan Submission Machine” Samoa Joe, also unbeaten in IWC, which includes victories over the likes of Chris Hero and AJ Styles. Sabin attempted to counter-act Joe’s power with amazing speed, but there was no escaping the clutch of the Samoan Submission Machine. Samoa Joe became the man to end Sabin’s 2 year IWC unbeaten streak with his lethal musclebuster.

“Fabulous” John McChesney escaped once again with his Super Indy Championship, but narrowly avoided a major loss and potential broken neck. With both men precariously on the ropes, Petey attempted a top rope Canadian Destroyer, but McChesney was able to control his body weight and counter into a huracanrana to score the win and retain the championship, continuing what has been an absolutely amazing year for the fabulous one.

On the subject of momentum in 2005, you also have to think about “Wonder Man” Glenn Spectre, who added former IWC Heavyweight and Super Indy Champion “Classic” Colt Cabana to his list of defeated foes, joining such other prolific names like Chris Hero and Christopher Daniels. Cabana matches Spectre’s mind games for most of the match, but couldn’t match his matwork, and it was Glenn’s technical prowess that brought him the win.

One of the biggest stories of the afternoon was the fact that IWC now has brand new tag team champions, and very deserving ones at that, Mickey & Marshall Gambino. One half of Southern Comfort, Chris Hamrick, was put in a tough position with the absence of partner Tracy Smothers, but searched the locker room and found “Hot Property” Jason Cage to be a suitable replacement. In the end, it was Cage who felt the Curse of the Gambino and was pinned. A frustrated Hamrick took his frustrations out on Cage with a sickening piledriver, but considering that neither member of Southern Comfort was pinned, you have to believe Smothers & Hamrick will be searching for a rematch in the coming weeks.

International champion Soldier made his return to IWC following a 9 month absence, adding another title defense on US soil under his belt. In the past we’ve seen Soldier overcome challenges from the likes of Christopher Daniels and Jimmy Jacobs, and his opponent tonight, “Virgin Slayer” Shiima Xion, gave Soldier perhaps a tougher test than any man had beforehand in the United States or Japan. Frequent interference and distractions from Xion’s advisor “The Prophet of Profit” Chris Maverick were thwarted by “Balls Hot” Troy Lords, which was enough to throw Xion off his game, and fall victim to a TKO for the 3 count.

The implosion of the former Ohio Players continued, as “Balls Hot” Troy Lords finally met the man who betrayed him back at Summer Sizzler 2, “Big Daddy of Destruction” J-Rocc. It was a battle several months in the making based on the mounting frustrations between the two in recent times. The match was marred by constant interference from another two men Lords has had problems with, Shiima Xion and Chris Maverick. Lords had J-Rocc down with his cradle breaker variation, but didn’t go for the pin as Maverick was distracting him and the referee. With the ref’s back turned, Shiima ran into the ring and delivered his From Lust 2 Dust snapmare driver on Lords, leaving him proxne to a J-Rocc pin. But the toll of the match caught up with him, and the precious extra seconds it took J-Rocc to get to the cover led to Lords’ recovery, and a quick crucifix pin to surprise J-Rocc for the victory.

Mineo Fujita, another import from the land of the rising sun, was very impressive in his IWC debut against “The New Face” Jason Gory. It was the fast-paced high-impact battle you’d expect, with an interesting twist. Fujita put away his opposition with the 450 Splash, a move very prominently placed in Jason Gory’s repertoire in recent times.