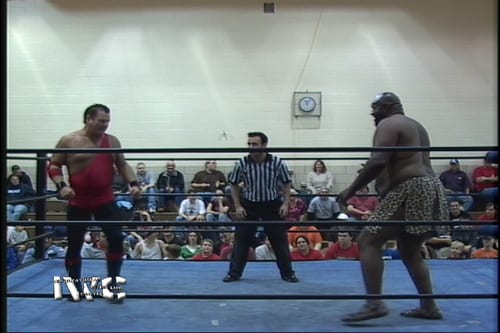 A Main Event 25 Years in the Making

IWC’s debut in Oil City, PA at Clarion University was headlined by a match-up of two men who have been annihilating each other in Memphis and abroad for almost three decades now: former AWA World/27 time USWA Heavyweight champion and current WWE Raw color commentator Jerry “The King” Lawler facing “Ugandan Giant” Kamala. Kamala gained control with his patented overhead chops, but once Lawler’s straps came down, the tides had turned. Lawler dazed Kamala with right hands, before mounting the ropes to put the Ugandan Giant away with a fist drop.

It was perhaps the strangest tag team match in company history as Super Indy Champion “Fabulous” John McChesney joined forces with the legendary “Innovator of Violence” Tommy Dreamer to take on top Super Indy Title contender “Prince of Punk” Shannon Moore and one-half of Southern Comfort, Chris Hamrick. It was a match featuring two top Super Indies, as well as two former ECW competitors. With Fabulous isolated in the ring, he once again faced adversity, having to single-handedly fight off the experience of Hamrick and tenacity of Moore. However, McChesney persevered once again and was able to tag Dreamer into action, who quickly took charge. McChesney and Dreamer both grabbed chairs and delivered Tommy’s infamous Tree of Woe dropkick, followed by a Spicolli Driver and McChesney frog splash for the win.

IWC Tag Team Champions Mickey & Marshall Gambino made their first official defense of the IWC Tag Titles a successful one, overcoming The International Males, “Prophet of Profit” Chris Maverick and “Virgin Slayer” Shiima Xion. Maverick & Xion are long-lasting rivals of the Gambinos, with Maverick frequently insulting the champions and frequently mispronouncing their names during guest commentary. Mickey & Marshall however still must be concerned with the potential threat of Southern Comfort, who will no doubt be after a third tag title reign.

“Balls Hot” Troy Lords was faced with the international challenge of Mineo Fujita xon his quest to maintain the momentum he’s had for a few months now. Long gone are the days of Lords whining about what should be handed to him, now he’s determined to prove to fans he really is the top-notch competitor he’s been claiming to be for so many months, and so far he’s done very well, even scoring a win over Sebastian Dark 2 weeks ago. At “Winter Bash” Lords was victorious again, as it came down to a mental game. Lords was able to control his weight and drop onto Fujita, countering a sunset flip attempt. The referee saw Fujita’s shoulders down and as a result Troy Lords wins the match.

“Sweet & Sour” Larry Sweeney made another defense of his alleged ICWICWA Texarkana Television Title, again facing a 2 time “winner” of that title “New Face” Jason Gory. Sweeney used some nefarious deeds involving that so-called prestigious belt to win his xmatch, but his insistence of the belt having a 24/7 title defense rule, came back to haunt him. Referee Bryce Remsburg rolled up Sweeney from behind and, with Gory making the count, Bryce became the new champion! His time on top would be short-lived however, as a little over an hour later, Sweeney caught Bryce off guard as he prepared to ref another match, and rolled him up to capture the title once again.

“Big Daddy of Destruction” J-Rocc avenged his “Revengeance 2” upset loss to “DeeeLicious” Jimmy Demarco. J-Rocc was able to keep his ego somewhat in check long enough to focus on the Gambino cousin, and pin him with his “One Hitter Quitter” death valley driver.

Special guest, the legendary Dominic Denucci, the man who trained Mick Foley, Shane Douglas, and many others, was being honored in the ring when color commentator “The Completely Unreasonable” Anthony Kingdom James couldn’t stand it any longer. He left his broadcast position and stormed the ring, insulting Denucci until Denucci had to physically retaliate, leading to an impromptu match. Kingdom tried a time-tested trick on a time-tested legend by bringinxg a chain into the ring, but eventually Denucci gained control of the object, knocked Kingdom senseless, and eventually score the win.

Also, The Patriot/King Kaluha saga continued. Kaluha showed great speed and agility for a man of his experience level, but the Patriot was able to roll him up out of the corner to score a win.