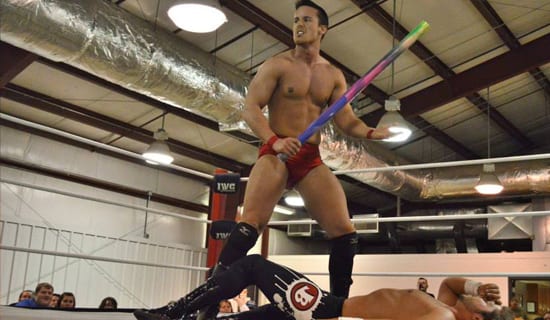 This past Saturday, IWC Wrestling ventured north to Clearfield, PA for the tenth time in our history to present Combat in Clearfield 6. After 4 Clearfield Cataclysms, the our “Combat” series picking up where they left off, area fans have been privy to some of the most unforgettable moments over the years that will have the town abuzz for a long time to come.

Such was the case as fans flocked to see the “Era of the Peacock” hit Clearfield as Dalton Castle made his first IWC Title Match in town a successful one, upending Team Big League member Bobby Fish. Fish’s plans were perhaps dashed by the ruling of IWC Owner Chuck Roberts, who had ejected Team Big League bodyguard Rex Lawless & acting head of Team Big League Justin LaBar from ringside. LaBar had been placed in charge by “Big League” John McChesney in his absence (John was suspended for a backstage assault on Justin Idol that left Idol off the Clearfield card as a precautionary measure). LaBar saw early success, as the 6’4 275 lb Lawless made quick work of double-tough Bronco McBride, meanwhile former IWC Tag Champions Jimmy Nutts & Joseph Brooks battled in a war that began as a struggle throughout the building during our live intermission, spilling into the ring thereafter. After Brooks’ intermission sneak-attack proved only temporarily successful, Team Big League decided to sabotage Nutts. With LaBar diverting the official, Brooks threw his confetti cannon into the hands of Nutts, before feigning injury himself. The official, upon turning around, had no choice but to believe that Nutts had struck Brooks, and a disqualification was ordered. With the damage done, Nutts decided he might as well give a reason to be disqualified, as post-match Nutts actually did use the cannon, before breaking it in half and spilling the remnants onto a motionless Brooks. Nutts has picked up a huge wave of crowd momentum, some impressive allies including Al Snow & even Dalton Castle himself, and a ton of self-confidence. Nutts’ redemption toward Team Big League seems to only be beginning.

“Premiere Athlete” Tony Nese scored a major win over “Neon Ninja” Facade, in spite of a deep laceration atop Nese’s forehead caused by the 3-time Super Indy Champion. As a result, Nese has qualified to meet “The Phenomenal” AJ Styles, a 2-time former Super Indy Champion in his own right, April 12 in Meadville at “Night of Superstars”. Nese would love to put his name back atop the IWC contenders list, either for the Super Indy Championship he held until Super Indy 12 last year, or the IWC Title itself. A win over AJ Styles would make Nese’s worthiness unquestionable. It will certainly be an unforgettable confrontation this April in Meadville!

In other action, Chest Flexor & “Kingpin” McDowell, the STDs, were able to retain the IWC Tag Titles against Remy LaVey & Sam Cassidy in spite of Chuck Roberts ordering Marshall “The Bull” Gambino to preside as special referee to prevent any shenanigans. Unfortunately, Marshall became part of the chaos, being knocked down accidentally with an IWC Tag Title belt, allowing mass chaos and the eventual 3-count upon his revival. Also, Clearfield native Sebastian picked up a big win over Andrew Palace, whose post-Super-Indy-Qualifying-Match ego continues to rear its ugly head. And former IWC Tag Champion Keith Haught polished off ornery diminutive time-traveler Corey Futuristic with the “Hot Mess”.

IWC returns to Clearfield on November 8, but in the mean time, all roads lead to White Oak & Meadville as a red hot 2014 continues!