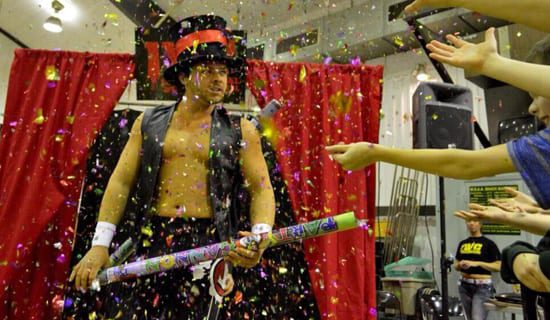 IWC Wrestling returned to the White Oak Athletic Association for our last stop before arguably the most star-studded event in IWC history next month in Meadville, and tonight was a night full of highs and lows for Team Big League on what was to be a night they took center stage.

John McChesney’s “State of Team Big League Address” was immediately met by controversy when John appeared confined to a wheelchair, concocting an elaborate story about a knee injury that would coincidentally keep him out of his scheduled match that night with former Team Big League member Jimmy Nutts. Between John, Nutts, IWC Owner Chuck Roberts and Justin Plummer (acting as the surrogate for former Team Big League Executive Consultant Norm Connors), a plan was concocted – Nutts would finally get McChesney & all of Team Big League in a six man tag next month at Night of Superstars along with any two partners he chooses, but only if John McChesney could pick Nutts’ opponent tonight!

McChesney’s choice was a shocker – Jon Bolen. Bolen had abandoned his tag partners of Remy LaVey & Sam Cassidy, leaving them to get swarmed and defeated by Founding Fathers Dennis Gregory, Jimmy Vega$ & their trainer Justin Idol. Bolen explained he was tired of leading around rookies and had a more important financial deal on the table – it soon became clear that deal was orchestrated by McChesney. However, the resolve of Nutts proved fortunate, as he was able to do what VERY few in IWC history have – despite McChesney and LaBar lurking at ringside, Nutts defied the odds and pinned the intense Bolen, only to be attacked from behind by McChesney, now “miraculously” out of his wheelchair and walking. As Team Big League celebrated their deed, Nutts took what little breath he had left to announce his choices for tag partners in Meadville… Nutts would battle Team Big League alongside his partners… Rick & Scott Steiner!

Team Big League had a chance to re-add the IWC Title to their storied ranks as well, as IWC Champion Dalton Castle was challenged by Joseph Brooks. After the ruse pulled earlier, Chuck Roberts was quick to escort McChesney from the building before the match, and the antics of Justin LaBar were quickly neutralized by Justin Plummer watching over the proceedings as well. With an even match at hand, Dalton was able to put away his third member of Team Big League in short order (joining McChesney and Bobby Fish, whom McChesney also officially fired from Team Big League tonight) and continue his reign in the Era of the Peacock.

With IWC Super Indy Champion RJ City not in attendance, the match between old-parters-turned-rivals Johnny Gargano and Facade was a reminder of what the Super Indy Division is truly all about. After nearly 20 minutes of war, Facade was able to finish off “The Whole Shebang” and Dragon Gate USA Champion and cement himself as remaining a top contender heading into this summer’s Super Indy 13.