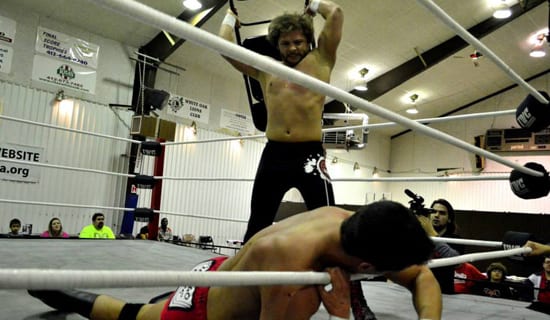 The feature match, a 2/3 Falls war between former Tag Team Champions Jimmy Nutts & Joseph Brooks saw the usual shortcuts & distractions neutralized. In spite of McChesney’s defeat of Justin Idol (in spite of being in just street clothes) at the outset of the evening, he was treated as a common criminal, handcuffed to the ringpost for this match, meanwhile Justin LaBar was handcuffed directly to Justin Plummer to prevent any issues there. Furthermore, the stipulation for the forthcoming fall would be decided by the camp of the previous fall’s victor. When Brooks pinned Nutts with illegal help from the ring ropes to capture Fall #1, Team Big League promptly made Fall #2 No Disqualification. With major damage done to Nutts’ larynx and throat region, it looked like the prospect of victory was quite bleak. However, Nutts survived to even the score, and an envelope left earlier that night by Nutts’ representation, Norm Connors revealed the final stipulation choice – “Last Man Standing”. McChesney & LaBar’s commandeering of the handcuff keys weren’t enough to thwart the comeback of Jimmy Nutts who scored a measure of revenge on former partner Brooks but the journey wasn’t over – As next month at Super Indy 13, it’s Nutts vs. McChesney in an unsanctioned streetfight!

Speaking of Super Indy 13, #AllEgo Ethan Page has been added to Super Indy as a result of his dubious and underhanded victory over “Neon Ninja” Facade. With Page joining the likes of current Super Indy (Self-proclaimed “Sports Entertainment”) Champion RJ City, and with Facade currently on the outside looking in, this year’s field of competitors is like no other before it. The respect and honor that is synonymous with Super Indies of years prior and talents like Super Indy 3 Winner Chris Sabin or Petey Williams, seems to be giving way to attitude and ego.

In another match with Super Indy implications, Ashley Sixx defeated Ethan Wright, however since this was not an originally scheduled Super Indy Qualifyer, it granted Ashley a spot in the Last Chance Super Indy Scramble, a 4 way match to be held the day of Super Indy XIII to determine the last seed. Sixx is a survivor, just three months ago he was declared cancer free after a year-plus long fight with Advanced Stage 3 Hodgekin’s Lymphoma. Ashley’s physical & mental perseverance led him to overcome the biggest battle of his life, can he now come back to win an arduous professional battle in Super Indy?

Chuck Roberts gave The STDs & Marshall The Bull the chance to prove themselves and air their grievances by having Marshall run the Gauntlet of STD members he had so dubiously officiated for in months prior. Not only that, but due to his incessant losing streak, Andrew Palace’s Super Indy Tournament spot went to the winner! Marshall plowed through Corey Futuristic early before having a tougher time with Chest Flexor, and then Kingpin McDowell, but emerging victorious each time. Finally, with the powerful bull beginning to show fatigue, and a renewed sense of focus with his career opportunity on the line, Palace was able to defeat the Bull, win the Gauntlet, and retain his Super Indy spot. However, as a result of pinning both tag champs, Chuck Roberts granted Marshall a future tag title shot… with his business associate Madisynn, herself roughed up by the STDs, as his tag team partner!

It was a career making win for The Knight Riders, Remy LaVey & Sam Cassidy as they defeated Dennis Gregory & Jimmy Vega$ in a big upset. However, the underlying story concerned Jimmy Vega$, who not only successfully petitioned for an IWC Title shot, citing his not being pinned during Chuck’s entire tenure running IWC, but also Vega$’ temper took center stage as well, as Vega$ took exception to “VIP” Joe Rosa’s special VIP section of the area, complete with drinks, bodyguards, and his own couch! Vega$ and Rosa needed to be separated but Rosa promised he too would be live at Super Indy XIII.

RJ City, Super Indy Champion, failed to show up in physical form (a cardboard image of “his face” appeared to get around the legal wording of Chuck’s demands), but it was decreed RJ MUST appear in White Oak in July and face his scheduled opponent for tonight, Keith Haught, or else Justin LaBar would take RJ’s place in the match!