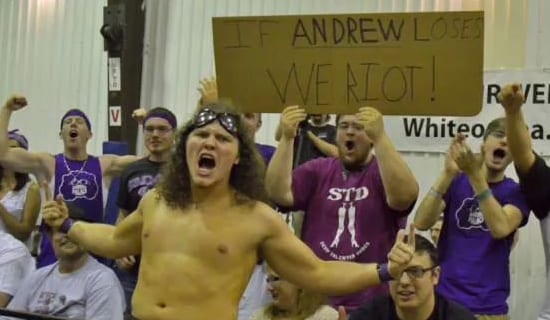 Proving Ground has quickly become that time of year where the young talent of IWC have a chance to step up and show they belong, be it in a high-profile, career-making situation, or a shot to prove you have what it takes to survive in the tough waters of IWC.

Keith Haught had made Proving Ground HIS event from the very first installment, and fate had put him in another huge opportunity… challenger to Super Indy (and self-proclaimed Sports Entertainment) Champion RJ City w/Justin LaBar. RJ & LaBar’s protests interrupted our show open, as the two objected to not only having to perform in White Oak, but also the ruling that RJ could lose his championship tonight if he is disqualified or counted out! After the variety of cheap ways, RJ used to propel himself to the first man to go coast-to-coast in Super Indy with title in tact, this certainly put a damper in the plans of the defending titleholder. RJ’s first encounter with Keith was condescending to say the least, but Keith showed he wasn’t going to take it anymore, stating that he had been looked down on and underestimated his entire life, but tonight he’d continue to prove everyone wrong by taking the Super Indy Title! RJ certainly came into things underestimating his foe, and plan after plan led to Keith kicking out. As RJ went to hit a neckbreaker, Keith surprised the champion with a backslide, earning a 3 count and apparently a Super Indy Title! However, the count was made by a second referee who ran in when the first was accidentally struck. It was Justin LaBar who awoke the first official and coaxed him into overruling the secondary official. As a result of Keith’s accidental physicality with the ref, RJ was awarded the match via disqualification. Keith Haught came as close as close can come, and while RJ had nowhere near the easy night he had planned, he does still leave as champion.

What started as a fun and unique ruling got tragically out of hand in the STD’s title defense vs. Marshall The Bull & business associate Madisynn. A mysterious and dubious injury to “Kingpin” McDowell left partner Chest Flexor without his championship comrade, but IWC brass ordered Corey Futuristic to step in as a surrogate defender here. Madisynn showed incredible heart in her first official outing, only aided by perhaps the best tag team competitor in IWC history. However, when the STDs began to struggle after a disagreement between Flexor & Andrew Palace who was ringside, a steel chair came into play, held by Corey. While it appeared Corey was ready to blast Marshall with the weapon, with Marshall daring him to, Corey turned and struck Madisynn straight in the skull resulting in one of the most sickening visuals in IWC history. The match was immediately stopped, with Marshall & Madisynn winning via disqualification. As of this writing, we have no news on Madisynn’s medical condition in what was obviously a very scary situation, which we hope to have more on before long here on IWCwrestling.com.

Jimmy Nutts had the task of facing a mystery opponent selected by Justin LaBar at the behest of John McChesney, or at least we thought. LaBar dug through the fine print of the contract, and used it to his advantage, selecting not one but THREE opponents for Nutts to battle in succession gauntlet-style. Two of the surrounding area’s most promising rising talents – Alex Daniels & Seth Allen brought the fight, but Nutts outlasted them both, though not without significant damage done to the leg of Jimmy. With that, LaBar’s trump card – former Super Indy Champion “One Man Militia” Matthew Justice! Matt continued the onslaught, but the resolve of Nutts pushed him through to go 3-for-3 on the night. It was also announced that Nutts would meet McChesney, officially and finally, next month at Caged Fury inside of 15 feet of steel!

The Founding Fathers were in the mood for a fight, and when the opponents of “Neon Ninja” Facade & the mammoth ex-rugby standout Asylum were unexpectedly absent, Dennis Gregory & Justin Idol w/Jimmy Vega$ found their targets. However, The Founding Fathers themselves became targets as “VIP” Joe Rosa again created a disturbance from his special VIP section, distracting Vega$ & Gregory, allowing Asylum & Facade to pick up a victory over Idol. The Father responded with a Vega$ challenge to fight Rosa, but IWC Owner Chuck Roberts put a “no contact” decree in place to protect all parties. However, Rosa did agree to have his own personal proving ground – his IWC in-ring debut. Rosa was able to pick up a win over a fast rising young star in his early 20s named Alex Matthews, but he lost his VIP section for his troubles. The Founding Fathers assaulted Rosa’s bouncers and overtook the area as Rosa walked out the front door in disgust!

However, the night ended on a dark note for the Founding Fathers, as Chuck Roberts discovered a series of fireworks in the Fathers’ travel bags, eerily reminiscent to fireworks used by the mysterious Faces of Change group that had appeared in front of Chuck’s house, and apparently had also left their mark similarly outside the White Oak Athletic Association. At last we heard, Roberts was investigating the matter further.

It was a big tag team win for Remy Lavey & Sam Cassidy, the Knight Riders, along with Aiden Veil, returning after a long 9 months on the shelf due to injury. The opponents, Bobby Shields, Ethan Wright, and Bronco McBride all have had big success with other tag partners, and all seemed to have their own strategy and desire to captain the team. When the bickering became too much, their young counterparts capitalized, showing the unity and synergy tag team wrestling is all about. Will any of their opponents regroup and react to such a frustrating set of circumstances?

Two young men not just having their first IWC match but their first match in general proved impressive as well – Andrew Palace, red hot after his Super Indy 13 performance, narrowly edged out a win over “Wild Child” Lee Ryans, meanwhile the masked and mysterious Dravoko downed “Old School Muscle” Nicki Valentino. Bright futures in play for both men, but what of the future of Valentino, as we saw Nicki met by a disgruntled Bobby Shields after the match?