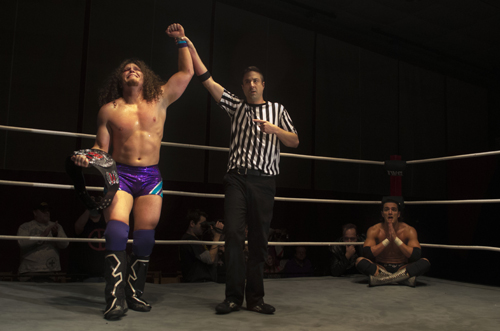 There was an atmosphere of celebration in the air at Court Time Sports Center on October 18th as we kicked off IWC’s 200th show, Retro Reunion 200! From our first live event at the Emerald Room in McKees Rocks run by Bubba the Bulldog in March 2001, to the 100th Show 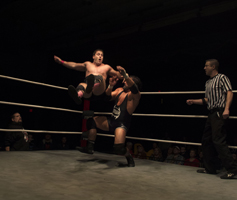 Weekend at Court Time Sports Center under Norm Connors in December 2007, to Chuck Roberts standing up for his promotion at the 200th show in October 2013, it has been a crazy run in the International Wrestling Cartel!

While in some cases, old friends were reuniting for the first time in years, the Gambino Brothers seemed to be on different pages. Marshall The Bull accompanied his brother “Nice Guy” Mickey Gambino to the ring for his match against Asylum, but made it known from the beginning he wasn’t happy about Mickey disappearing several years ago. The two powerhouses battled it out but Asylum was able to pick up the win following a Doctor Bomb on Mickey! Marshall wasn’t happy with the loss, and slammed his own brother on the entrance ramp, effectively ending the biggest tag team dynasty in IWC history! 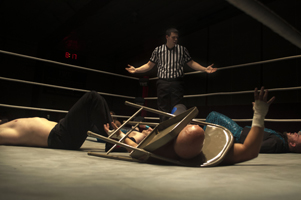 The IWC Tag Team Titles were on the line next as the Sexy Talented Dudes were set to defend against a team hand-picked by IWC minority share owner Jimmy DeMarco. Chest Flexor tried to pull a fast one, replacing the “kingpin” of the team with Bronco McBride, complete in some kind of cowboy bowler attire. DeMarco had one up his sleeve though, as The Hollywood Balds, DeMarco and his old tag partner Vendetta (with “Family” member Viki Gambino at their side) showed up to take on the STDs! A turkey, a Jake Clemons/Corey Futuristic catfight, and a pair of Stone Cold Stunners later, and the Hollywood Balds captured the IWC Tag Team Titles in a shocking upset! 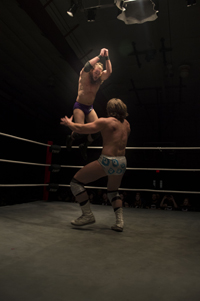 Team Big League hit the ring to discuss their upcoming acquirement of Matt Hardy. However, much to the dismay of Justin LaBar & John McChesney, Hardy’s video addressing the crowd not only disavowed any alignment with Team Big League, but Hardy even challenged McChesney to a match at Winner Takes All on December 13th! IWC majority share owner Chuck Roberts came to the ring to make the match official, but McChesney challenged him to a one-on-one match later in the evening!

With Matthew Justice already in the ring with LaBar & Team Big League, the IWC World Heavyweight Champion Dalton Castle came to the ring for his match! Justice was the first man to pin Castle in an IWC ring back in October 2011 at our 10th Anniversary Show, and he was on a mission to end Castle’s title reign here. He came close on several occasions, but the “Party Peacock” was able to put him away with the deadlift german suplex that won him the title back in December! 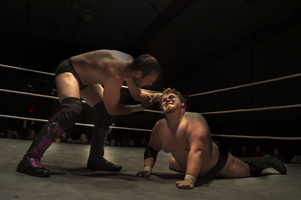 or in the mid-to-late 2000s. It became a staple of the tag team division in the Norm Connors era, so when Chuck Roberts gave Norm the opportunity to choose a match for the 200th show, it’s no surprise he chose a four-way scramble. The Norm Connors Invitational Scramble (NCIS) saw Flex Appeal, Haught & Cute, W.A.R., and the reunited BabyFace Fire (rechristened “Heel Heat” and accompanied by their old manager “The Prophet of Profit” Chris Maverick) battle it out for a shot at the IWC Tag Team Titles. The action was fast & furious, as it always is in these four-way scrambles. During the heat of it all, Bobby Shields picked up Colin Delaney for a Body Bomb. Keith Haught attempted to help his partner, but ended up kicking him instead as Shields turned around. Nickie Valentino took Haught out and Flex Appeal hit the Body Bomb for the win and the title shot! After the bout, Colin was so incensed with Haught’s mistake that he attacked his partner. Referees attempted to intervene, but were barely able to seperate Colin from the situation. What was a fun-loving team disintegrated into a cloud of anger and resentment right in front of our eyes. 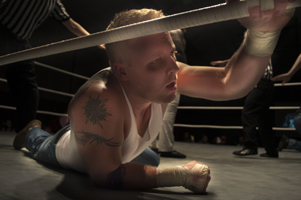 “Wild Child” Lee Ryans and Japanese youngster Shinya Ishida attempted to have an international showcase, but were attacked and dispensed from the ring by the Founding Fathers, Dennis Gregory and Jimmy Vega$. They demanded the Faces of Change come to the ring right then and there for their unsanctioned fight. The FOC and VIP Joe Rosa hadn’t been seen in the building yet, so we broke for intermission. When the FOC appeared, the fight commenced! The FF seemed like they might have the advantage as they brawled through the crowd, but the Faces of Change not only had a two-man advantage, but a pair of handcuffs as well. They 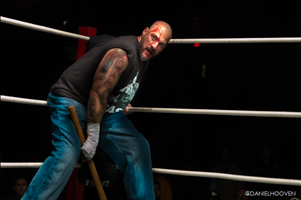 handcuffed the larger, stronger Vega$ to the corner and attacked Gregory and the smaller and injured Justin Idol. The referees attempted to free Vega$ while Darin Dinero of the FOC planted Gregory on the stage with a sickening cradle tombstone piledriver. Doctors and staff tended to Gregory as Vega$ got free and chased off the Faces of Change. This wasn’t the last we’d hear from either group, though, as later in the evening, Vega$ demanded Rosa and the F 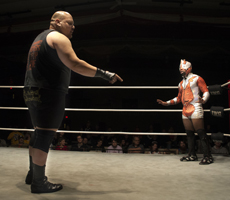 aces of Change meet the Founding Fathers in December in a match. However, Rosa would only agree if the Founding Fathers put their careers on the line. Vega$ agreed, and the match is signed for December 13th! Will three of the biggest legacies in IWC be put to rest by these brash youngsters?

Iron City Wrestling Academy graduate Draviko faced off against former IWC Tag Team Champion and the man responsible for bringing Shane Taylor, Jason Bane, and Raymond Rowe to IWC, J-Rocc. The veteran seemed to have things well in hand, but the rookie was able to use his speed and quickness to throw the “Big Daddy of Destruction” off his game and grab a cradle for the pinfall victory! Draviko 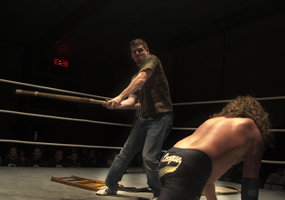 IWC owner Chuck Roberts defended his name and his company against Team Big League’s John McChesney. Chuck was seconded by IWC minority share owner Jimmy DeMarco, who had a hand in the action as well, making the match No Disqualification! With those rules in place, DeMarco not only introduced weapons into the match, but also had no problem using some of them on McChesney himself! Chuck fought valiantly and more intensely than most would imagin 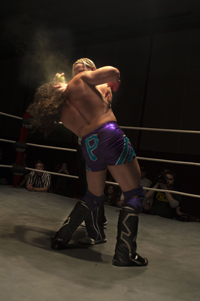 e, but the in-ring experience of McChesney put Chuck away following a shot with a trash can and a superkick. But it appeared Chuck earned McChesney’s respect after all following the bout.

The main event saw IWC Super Indy Champion RJ City, with his agent Justin LaBar, defend his title against Andrew Palace! The two men met previously in the Super Indy XIII tournament back in June, with City picking up the win when City pinned Palace with his feet on the ropes. Palace was unrelenting in the bout, bringing the fight to City. Meanwhile, City was trying to use every trick in the book, including help from LaBar at ringside. Several times, City tried to lock on his sleeperhold, “Goodnight, Everybody!” to get a submission win. Eventually, he did have it locked in. But, Palace was prepared, walked up the corner, and reversed it into a pinfall for the win! His celebration was short-lived however, when Facade showed up and spraypainted him in the face! The bitter and jealous “Super Indy Samurai” dropped Palace on his newly-won title belt with an Arashikage Driver, and spraypained his name on Palace’s chest! Jimmy DeMarco finally put a stop to it and signed a Ladder Match between the two men for December 13th! 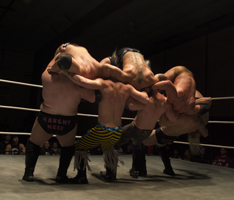 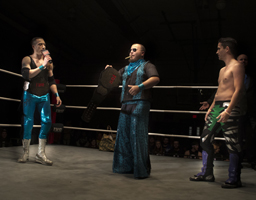 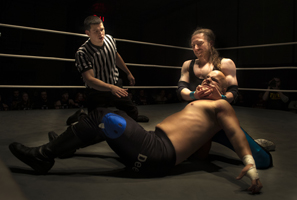 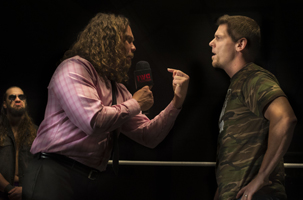 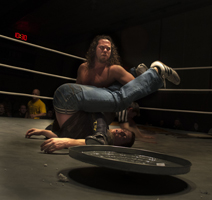 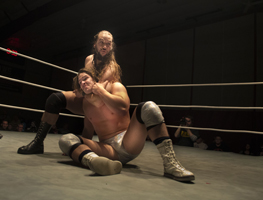 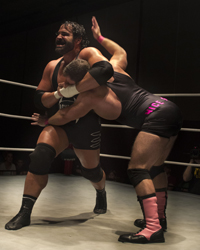 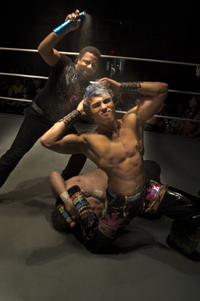 For more Retro Reunion 200 images from Daniel Hooven, visit the album on our Facebook!