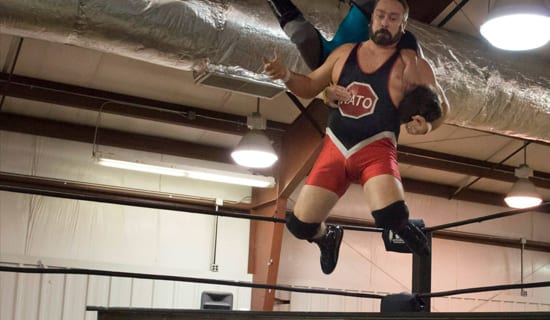 IWC set a brand new Clearfield attendance record for its first show on the road under the auspices of new owner Justin Plummer, the return of the intimidating Steel Cage, and the chance to say goodbye to a regional legend!

KATO! has been looked at as one of the most talented and intelligent veterans of our industry in this part of the country for well over a decade and, now that he is on his official retirement tour, it was only natural he made one final stop in Clearfield, where he has been a staple IWC events there for many years. KATO! teamed with Clearfield native Sebastian to battle the debuting New York-based team of The MOTN Lions – Cloudy (who has been in IWC before with then-tag partner Cheech) & Nick Ando. Since KATO! was the guest of honor, he was given a bit of influence over the match itself – namely a surprise special stipulation that this was now a TABLE MATCH! It was a KATO! Crunch off the second turnbuckle to Cloudy that led to a successful final match for KATO!, but that moment was soon tarnished. “The Embodiment of Evil” Krimson, moments after an absolutely dominant victory over young Aiden Veil, ending in Krimson seemingly abducting the energetic rock star (IWCwrestling.com has learned of no information as to what took place following the match, but sources are investigating!), returned to ringside seemingly ready to target yet another hero on what he calls his “Kill Your Idol” tour. Krimson blinded KATO! with that poisonous red mist he spews into the faces of helpless victims. KATO! was seriously hurt, but this story would continue as we moved on.

After defiantly severing his ties with Justin LaBar & the rest of team big league, John McChesney had a chance to prove he truly has changed his outlook on life, as LaBar led Joseph Brooks into battle with John one-on-one inside a fifteen foot high steel cage. While the cage is usually a McChesney specialty, LaBar was still able to make his presence known, acting as a human shield whenever McChesney tried to escape to victory. While the steel was successful in keeping LaBar out of the ring, that was not the case with the diabolical Krimson, who returned again, seemingly to make the night a perfect trifecta by adding McChesney to his victims list. However, KATO!, battered, and bandaged over one eye, returned gallantly to gain retribution on Krimson, as the two battled to the back. McChesney was able to use the distraction to rally himself to victory, capping off a successful night for both McChesney & KATO! McChesney waited until the end to drop his biggest bombshell… a message of his own for Krimson, the newly-christened Warchild and anyone else who may be lurking in the shadows… McChesney would be out for retribution of his own at Night of Superstars… and he’ll have Asylum & the legendary Kevin Nash by his side!

Colin Delaney recorded a clean sweep, albeit of questionable legality, in a three-way elimination match featuring impressive high-flying youngsters such as 19-year-old Alex Daniels and the masked Draviko, to earn himself the first guaranteed spot in the Ric Flair Invitational Battle Royal. However, Colin wasn’t happy with just that. Colin continued to loudly complain about a lack of an IWC Title shot, citing his pinfall victory over current champion Tommy Dreamer, about an hour before Dreamer won the title from RJ City. While there is still heavy debate on who between Colin, City, and long-standing champion Dalton Castle is most worthy to face Dreamer, one man who finds his way at the front of the line is the “Man Beast” Rhino, who will meet Dreamer April 11 in Meadville after his dominant victory over former IWC Champion Logan Shulo/Elias Samson on WWE NXT programming. But who will be next in line from there between Colin, RJ & Dalton?

Super Indy Champion Andrew Palace continued his meteoric rise with an inspiring victory over his former STD leader – Chest Flexor. In a battle that had everything from a steel chain to a pantsing, Andrew’s stock as the face of Super Indy continues to rise!

Jock Samson is a pretty unique cat, that’s for sure. When his scheduled partner Bronco McBride was not in attendance for their scheduled match with Faces of Change leader and one-half of the IWC Tag Team Champions Joe Rosa and Darin Dinero, Jock found a replacement partner, claiming he “met him in prison”. With that, we see the first IWC appearance of Bryan Castle, known as “The World’s Most Huggable Wrestler”. This agile 300+ pounder may not be the smartest in the fight, he can be a bit childlike and gullible, however he brought the goods, as Jock & Castle win their debut as a team together! The FOC seemed to have major disagreements following the bout, as Rosa publicly dressed down Dinero as fellow FOC member Roger Corpo looked on. Is the stress of having to be IWC Tag Champion with arch-enemy and currently-suspended Founding Father Jimmy Vega$ getting to Rosa?

In other action, Women’s action returned to Clearfield as the internationally reknowned Marti Belle recorded a victory over Angel Dust, and “STD in Testing”, and man who actually named his sideburns (Gary and Larry, if you’re curious) “Wild Child” Lee Ryans fell to the “Bearcat” Keith Haught.