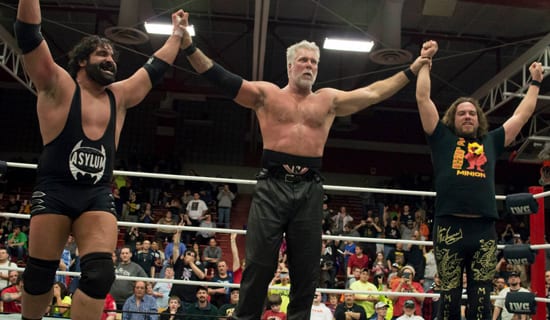 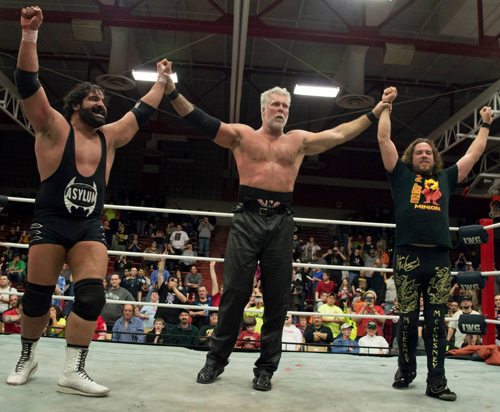 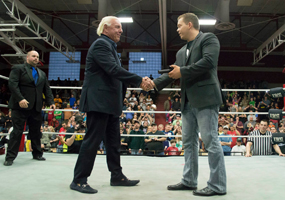 A new attendance record was set for the International Wrestling Cartel’s annual stop in Meadville, PA for the most star-studded night of the year, Night of Superstars 4. A lengthy meet & greet, including a chance to meet the timeless 16-time World Champion & 2x Hall of Famer Ric Flair, who also kicked off the live event with an in-ring speech, preceded what is always an energetic and newsworthy event, this year being no exception.

Our feature bout saw a re-booted and super-sized Team Big League, of John 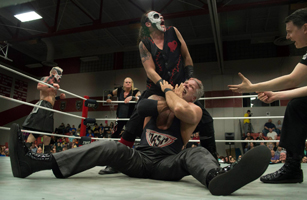 McChesney leading in the angry Asylum and the recent WWE Hall of Fame inductee Kevin Nash into six-man war against the macabe Dead Wrestling Society, led by “The Embodiment of Evil” Krimson, along with Warchild (the former Jon Bolen), the “Vampire Warrior” Gangrel, and escorted by the man we knew as Aiden Veil, but who certainly didn’t resemble the same young man anymore, as his upbeat energy and flashy rock-inspired clothing was replaced by foreboding facepaint, and a dark soulless stare. While all eyes were focused mainly on the power of Nash and recent resurgence of McChesney, it was Asylum who was the hero of his team, scoring the winning pinfall and avenging the DWS’ injuring him some weeks back. However, Kevin Nash gave the DWS the exclamation point onto the sentence by drilling Veil with the Jackknife Powerbomb. Team Big League stands triumphant, but how will Krimson & the DWS respond? 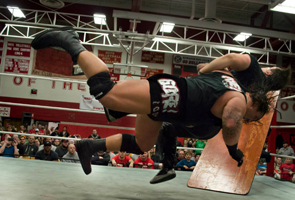 Tension was in the air all day as IWC Champion “The Innovator of Violence” Tommy Dreamer defended his title in an Extreme Rules match against “The Man Beast” Rhino. Two men who are very synonymous with the Original ECW – Rhino as their final ever holder of both the ECW World Title & ECW TV Title, and Tommy as viewed by many as the lifeblood & conscience of ECW – could no doubt gain some major pride and bragging rights, as the two sit atop the ECW history books practically side by side. The match was brutal, as expected, with garbage cans and kendo sticks used at will. Rhino brought a table into the proceedings, but it was that table, and Rhino’s amazing speed and momentum, that led to the Man Beast’s downfall, as Dreamer side-stepped a Gore attempt, sending Rhino crashing into the lumber, leading to a Tommy Dreamer pinfall. 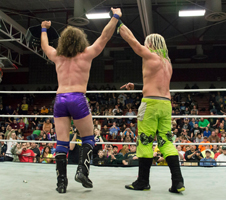 IWC Super Indy Champion Andrew Palace won a game of inches against 3-time IWC Super Indy Champion “Neon Ninja” Facade to retain his title narrowly in what was to be the final ever encounter between the two athletes. Many speculated how Facade, whose temper and professionalism has been called into question many times toward the end of 2014 due to his outbursts concerning Palace and the Super Indy Title, would handle such a loss if it were indeed to take place, but all eyes watched on as Facade showed Palace the respect Palace has indeed earned these past six months as champion, while Facade proves that he truly does have the makings of a champion, title belt or not. 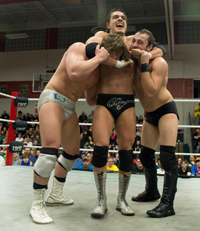 Dalton Castle has been making headlines throughout wrestling lately, but much to his dismay it has not been as IWC Champion. Arguably, the one shafted the most in the “Reset Button” controversy that saw RJ City, then Tommy Dreamer, become IWC Champion in January, Dalton took step one to getting his title back by earning a rightful rematch many feel should have been automatic to begin with, as Dalton defeated RJ and Colin Delaney (the man who beat Dreamer under “Extreme Rules” a mere hour before Tommy became IWC Champion) in a #1 Contender’s Match. However, word has it RJ & Colin immediately expressed their protest regarding the decision. Several comments were heard shouted from behind closed doors, including mentions of a shoe used in the match (the shoe of RJ’s representation Justin LaBar, who handed RJ the shoe during the match) and many other comments not fit to place 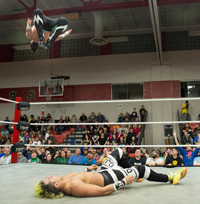 here. We’ll follow any news that develops further on this issue here at IWCwrestling.com.

A dream match of fans of cruiserweight/X Division style wrestling saw the former Evan Bourne, “Reborn” Matt Sydal make his first IWC appearance in nine years, as he opposed DJ Z Zema Ion in a battle of Air Bourne vs. Airhorn, saw Sydal and his breathtaking Shooting Star Press pick up the victory… Dylan Bostic, the “Justin Bieber of Pro Wrestling”, along with Ray Lyn, the “Miley Cyrus of Pro Wrestling” avenged their loss to Keith Haught thanks to some nefarious distraction efforts, putting “Swaggy D” on the IWC winning track…The massive Wardlow survived over 20 other IWC stars to win the Ric Flair Invitational Battle Royal that saw several young talents shine, a Space Monkey, and mounting tensions continuing among everyone involved in the Founding Fathers/Faces of Change IWC Tag Title Turmoil. 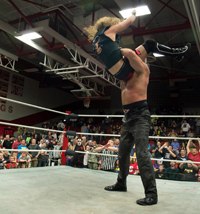 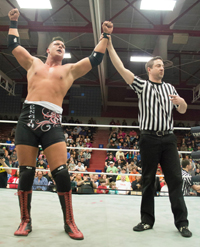 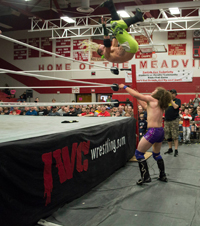 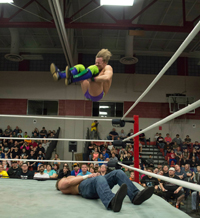 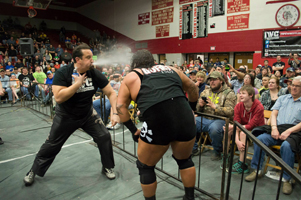 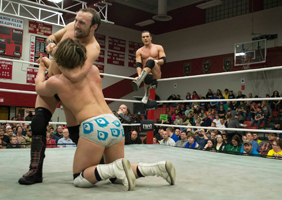 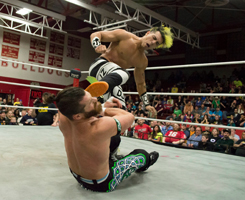 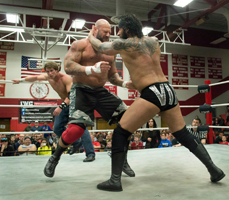 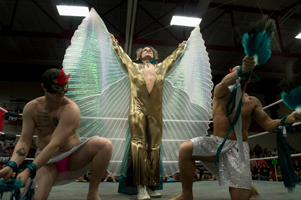 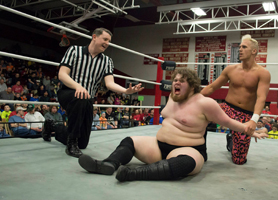 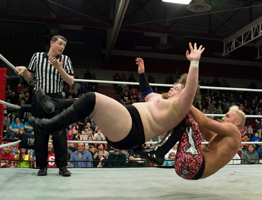 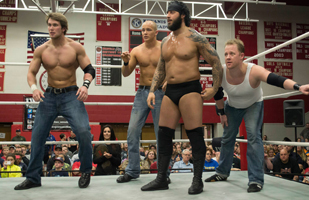 For more Night of the Superstars images from Daniel Hooven, visit the album on our Facebook!