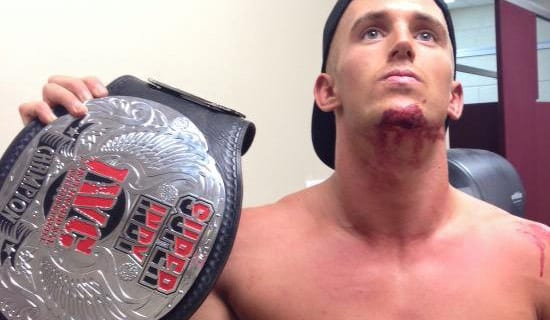 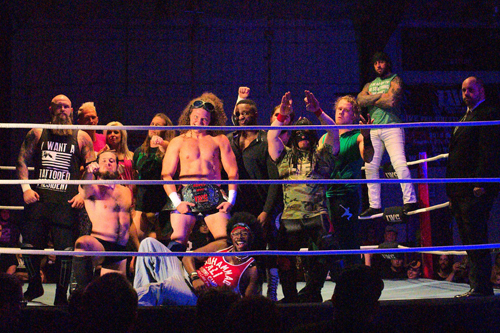 On Saturday, June 13, 2015, IWC Wrestling presented the 14th annual installment of one of the longest-running tournaments in independent professional wrestling, with among the most storied lineages anywhere, the Super Indy Tournament. This annual event has created so many memories and moments throughout its existence, and the memories of the 2015 installment – of guts, desire, sacrifice, and controversy, are certainly no exception.

The opening round saw a re-match of two exciting 19-year-old rookies, each trained by former Super Indy Champion Johnny Gargano as freerunner Alex Daniels overcame Joshua Singh. The long-time “Baddest Man In IWC” and current one-half of War Machine in Ring of Honor, Raymond Rowe, disposed of “VIP” Joe Rosa, who entered the tournament via questionable means when he strong-armed the spot from the fan-voted Face Of Change Darin Dinero. In a battle of two mean with a rich history with one another, one of Ring of Honor’s fastest rising stars Cedric Alexander defeated one of his earliest tag team partners and sources of advice and knowledge, Sugar Dunkerton, who in his own right proved himself to be having a banner year in his own career, as “Please Come Back” chants echoed throughout Elizabeth following his narrow loss. PWG Tag Team Champions and frequent competitive rivals Andrew Everett and Trevor Lee had the latest installment of their epic series of matches, both with and against one another, with the former Chiva Kid, Everett pulling off a much-deserved victory.

Second round action saw a battle of ROH superstars, as Rowe overcame Alexander, and in perhaps the biggest win of his career, Alex Daniels was able to topple Andrew Everett in a breathtaking athletic display. The seeding saw Dylan Bostic oppose the only man to receive a bye this year, reigning Super Indy Champion Andrew Palace, looking to become only the second man to successfully retain his title in the tournament. However, circumstances proved to be in Bostic’s favor again, not to mention the alleged “Miley Cyrus of Pro Wrestling’ Ray Lyn. Those combined efforts saw Palace sustain a back injury during an awkward tumble into the ringside guardrails, however an injury that Palace valiantly fought through. But, couple that injury with the distractions of Lyn, and a blatant low blow from Bostic and the champion was eliminated, in a quite disrespectful fashion not becoming of the Super Indy legacy at that! Total disrespect by Bostic, as he looks more toward materialism and superficiality than merit and honor.

The Super Indy 14 finals – Ray Rowe vs. Alex Daniels vs. Dylan Bostic – will, unquestionably, go down as the most controversial final in IWC history. With two eliminations separating one of these men from their Super Indy dreams, the battle was on. Daniels and Bostic both attempted to focus on Rowe, who out-powered and out-struck both men for a majority of the time. Joe Rosa, assuredly not coincidentally, picked this time of Rowe dominance to emerge from the shadows and officially accept the Founding Fathers’ earlier WarGames challenge for Caged Fury. Rosa’s timing was evident, clearly still stinging from being eliminated by Rowe in the opening round, Rosa played upon Rowe’s short temper to goad him into a ringside altercation with he & his FOC back-up Dinero & Corpo, which unfortunately led to a count-out, eliminating what many were calling an odds-on-favorite. Rowe immediately was in hot pursuit of Rosa & The FOC, and one can only wonder the painful things that will transpire if and when Rowe catches up to them!

As Bostic and Daniels watched their odds increase from 33% to 50%, both went for the kill. For Daniels, that means an awe-inspiring 630-degree-splash that has already put away an impressive list of athletes in IWC and beyond. Was it enough to put away Dylan Bostic? Well, that answer still isn’t entirely clear, days later. A Daniels pinning attempt spiraled into controversy and chaos, further aided by the fact the acting referee had been injured by Rowe as a result of the count-out ruling, and a surrogate referee had come down to call the remainder of the match. Bostic kicked out at some point in this pinfall – but was it just before the count of 3 or just after it? Even still, was his foot under the bottom rope the whole time, thus negating the need to kick out to begin with and leaving the pinfall null and void. The two referees had completely different vantage points, and after a small conference, the original official ruled the match must continue. As everyone struggled to regain their bearings, Bostic, now bleeding, seized an opportunity as his instincts kicked in, and a 19-year-old rookie in his first main event tournament final became Bostic’s third victim of circumstance of the night, and despite the controversy and the injury, finds himself Super Indy Champion. Bostic & Lyn, showing off their perceived superiority as per usual, celebrated as they knew how – by belittling and looking down on everyone else, especially IWC interviewer Brittany, which actually led to a physical confrontation between Brittany & Ray Lyn, and the re-emergence of Andrew Palace, no doubt still angry over how he was eliminated and the heaps of controversy Bostic has brought into this entire tournament. It was violent, it was unpredictable, it was, at times, uncontrollable. But it is far from over for Dylan Bostic, as no doubt Palace, Daniels, and an entire field of others now set their sights on IWC’s biggest Belieber.

Justin LaBar’s new powerhouse team of Wardlow and “Big Time” Bill Collier were able to pin Joseph Brooks en route to a victory over former IWC Tag Champs Brooks & Jimmy Nutts. LaBar dropped a couple of major bombshells here… not only taking credit for running John McChesney out of IWC, in his words at least, but also claimed that he had a new star on his payroll – “The Man Beast” Rhino! LaBar revealed that Rhino would be at IWC Caged Fury this August to challenge IWC Champion Tommy Dreamer. While we can confirm the match has been signed, are LaBar’s claims of having the former 2-time World Champion in his camp true? If so, is there anyone who can stop Justin LaBar? Will Jimmy Nutts be able to figure a way to battle what are becoming increasingly stacked odds?