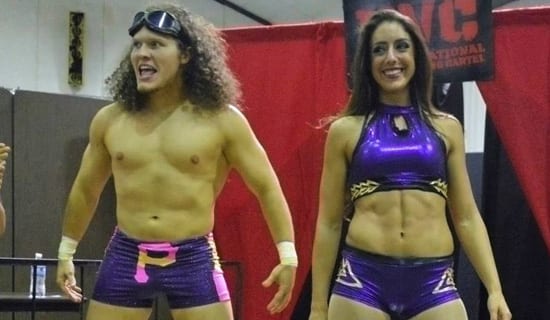 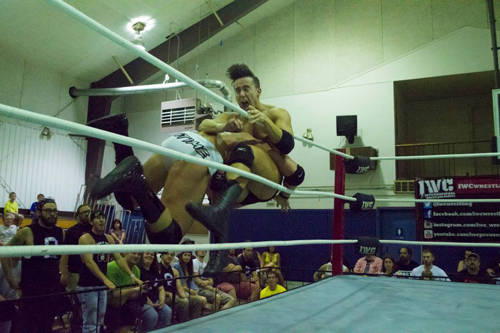 On Saturday, August 1, 2015, IWC’s Proving Ground 4 returned to the White Oak Athletic Association in White Oak, PA. Historically, this live event features several points of view on the phrase “Proving Ground”. One aspect of the live event features young talent from the Iron City Wrestling Academy who have proven themselves ready for their debut in the squared circle. Another aspect of Proving Ground is young talent from around the globe making their IWC debut and proving if they are worthy enough to compete in an IWC ring. Yet another is young IWC talent stepping up and proving something to their opponents, the other wrestlers in the locker room, the IWC management team, and even themselves. We saw examples of all of these at Proving Ground 4. 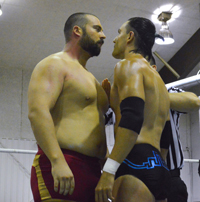 The big story of Proving Ground 4 was that former IWC World Heavyweight & Super Indy Champion RJ City was going to sign the “biggest contract in IWC history,” a 5-year big money extention of his previous IWC deal that began 2 years prior at Proving Ground 2. In typical RJ City fashion, he and his agent Justin LaBar attempted to humiliate IWC owner Justin Plummer by forcing him to be a table for City to sign his contract on. Plummer wasn’t about to take the abuse and instead offered RJ a match against a young IWC talent making their debut. RJ agreed… only to find out his opponent was the debuting 6’6″, 300+ lb. BULK NASTY! RJ tried to use his wits and Justin LaBar at ringside to keep the bigger man down, but a huge slam put RJ City out for the count. After the match, Nasty ripped up RJ’s contract, seemingly sending him packing from IWC for good!

In the main event of the evening, Team LaBar member “Big Time” Bill Collier battled former LaBar charge Jimmy Nutts. LaBar has been on a mission to eliminate Nutts from IWC, and this was his latest attempt. However, his actions earlier in the evening led Plummer to remove LaBar from ringside. Nutts was incredibly outmatched in size and power during the match. Collier literally threw Nutts from pillar to post, and one side of the ring to the other, and even threw him several rows deep into the crowd. But, Nutts’ incredible heart and determination kept him alive in the bout. A combination of a second rope Ace Crusher followed by a quick pinfall gave Nutts the victory! Collier wasn’t finished and continued to attack Nutts after the bell, but Bulk Nasty made the save with a pipe! Collier backed down, but a bout between the two seems to be in the making! 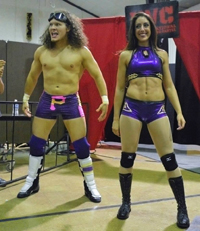 The other match in our big double main event saw the Platinum World Tour of IWC Super Indy Champion Dylan Bostic and his main squeeze Ray Lyn facing off against former champion Andrew Palace and the debuting Britt Baker! Baker was training at the Iron City Wrestling Academy while doing interview segments for IWC live events and IWCwrestling.com segments. Ray Lyn took offense and began verbally and eventually physically attacking Baker, which led to this match. It seemed like Bostic & Ray Lyn underestimated Palace & Baker, and the duo was disposed of after Baker hit Ray Lyn with the Baker Buster on top of a downed Bostic for the win. Bostic looked like he was going to attack after the bell, and Alex Daniels saw this from the locker room and ran Bostic off. Palace didn’t seem happy, got very protective of Baker, and told Daniels he didn’t need his help. Daniels, who many feel is the uncrowned Super Indy Champion, defeated Justin Idol earlier in the evening and was told by Justin Plummer that he is in line for a title shot in the very near future. With Palace getting a win over Bostic here, does he have a claim for the title as well? 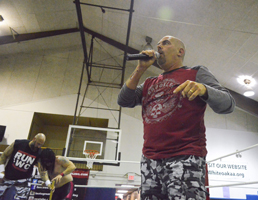 The war between the Founding Fathers and the Faces of Change continued at Proving Ground 4. A six-man tag between Jimmy Vega$, Dennis Gregory, & Super Hentai and VIP Joe Rosa, Darin Dinero, & Roger Corpo was to be held to determine the one-man advantage in the War Games match at Caged Fury on August 22nd in Elizabeth, PA. Instead, it was revealed that Vega$ recently suffered an injury to his quad and wasn’t medically cleared to compete. Instead, the match continued as a 3-on-2 handicapped match. That is, until Corpo made the mistake of mocking a guest of the Founding Fathers, and the original Founding Father of IWC, Bubba the Bulldog in the crowd. Bubba couldn’t take it anymore and jumped the railing, attacking VIP & the Faces of Change and joining the bout, evening the odds! Unfortunately, Bubba was neutralized on the floor, with the FOC cutting his arm down to the bone on the guardrail. While that was happening, Rosa hit Super Hentai with a piledriver in the ring to win the match and gain the advantage in War Games. After asking for his son’s feelings on the matter, Bubba demanded to be inserted into the War Games cage match! It is now a 4-on-4 bout, with Justin Idol joining Team VIP, and Bubba the Bulldog joining the Founding Fathers! With Team VIP getting the early advantage in the cage, will that spell disaster for the Founding Fathers?

Asylum returned to IWC after several months away filming The Amazing Race Canada, and demanded a face-to-face with Krimson & the Dead Wrestling Society. Instead, he was confronted by DWS member Veil. Asylum made quick work of his smaller opponent, but still wants answers from Krimson. Will we finally see them face to face again at Caged Fury? … Channing Decker & Trent Gibson, collectively known as the Fraternity made their IWC debut. The party boys were able to defeat the new duo of Remy Lavey & Keith Haught. The Frat looked impressive in their win over the “Mind Eraser” and the “Bearcat”, picking up the win with a double-team brainbuster they called the Keg Stand. Despite their loss, Haught & Lavey showed signs of teamwork together, and indicated they may continue this alliance. … Elsewhere, Chest Flexor also returned to action after a few months away, but was upended by Space Monkey despite constant interference from Corey Futuristic.