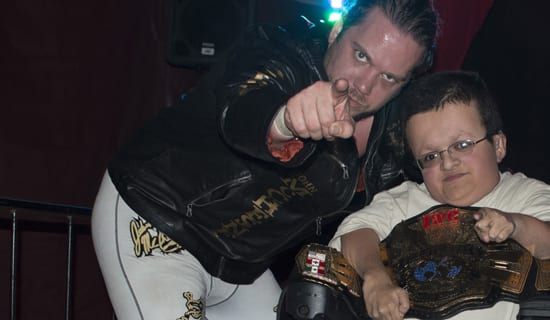 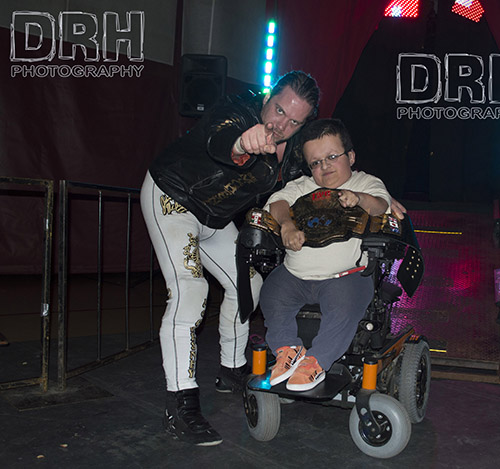 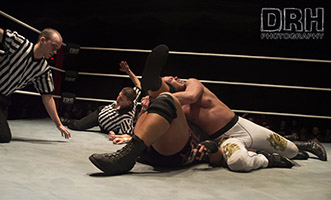 The main event saw IWC World Heavyweight Champion and Team LaBar member Rhino defending his title against the two #1 contenders Jimmy Nutts and “Big League” John McChesney. McChesney started things with an epic entrance from his own personal ring announcer, “Big League” Jordie Nelson! Rhino seemed perfectly fine letting McChesney and Nutts work out their problems while he stood on the sidelines and picked his spots. After an errant superkick took referee CJ Sensation out, and Rhino attacked replacement referee Dave Dawson, Nutts laid out Rhino with an Ace Crusher. But, when Nutts turned around, McChesney superkicked him! Nutts landed on Rhino while McChesney covered Rhino for the pin, and both referees counted 3! Sensation saw Nutts pinning Rhino, while Dawson saw McChesney pinning Rhino. IWC owner Justin Plummer hit the ring to sort things out, and was about to award the bout to both men when the participants and the crowd asked for 5 more minutes! They fought neck-and-neck for the next five minutes until the time expired, once again with no clear winner. However, Plummer insisted on having a clear-cut winner, wanting to avoid the controversy of June’s Super Indy Tournament, and declared the match to begin again! Several more minutes of back-and-forth action between the two men saw McChesney finally hitting one last superkick on Nutts and scoring the victory, winning his third IWC World Heavyweight Championship! After the match, McChesney praised Nutts’ performance, and offered him a title match at Winner Takes All on December 12th. But, not just a title match… the first ever ladder match for the IWC 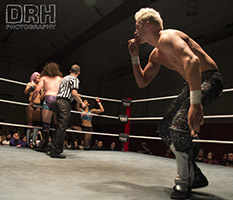 IWC Super Indy Champion “Swaggy D” Dylan Bostic defended his title against former champion Andrew Palace. After avoiding the former champion since pinning him back in Super Indy 14 in June, this was the first one-on-one match between the two for Bostic’s title. Of course, it wasn’t one-on-one as Bostic’s girlfriend Ray Lyn and her associate, TNA Knockout Marti Belle, were at ringside, interfering at every turn. Their interference was enough of a distraction to allow Bostic to reverse Palace’s finisher into a roll-up to get the win. After the match, Bostic hit Palace with the Super Indy Title belt, and cut off a lock of his hair! This issue is certainly not over, with Bostic taking a piece of Palace’s dignity! Another story from this match to keep your eye on was the appearance of notorious manager Benjamin C. Steele at ringside! Steele has guided many talents to championships across the tri-state area, but has never been seen in IWC. It appeared he was taking notes on the bout. What was he doing there? 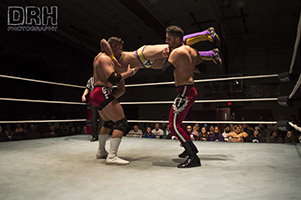 While the IWC Tag Team Championships were not up for grabs at Unbreakable, there was lots of advancement regarding the upcoming four-way scramble at Winner Takes All on December 12th. The Fraternity returned to IWC and battled the team of Alex Daniels & Joshua Singh, collectively known as Cleveland Parkour. The Frat earned a spot in the four-way as they hit Daniels with the Keg Stand to pick up the win. Later in the night, Founding Fathers members Dennis Gregory & Super Hentai defeated the duo of Keith Haught & Remy Lavey to advance to the four-way. After the match, Marshall Gambino appeared in the aisle to talk about the state of the tag division. He promised that former 5-time IWC Tag Team Champions the Gambino Brothers would return for the final spot in the four-way! Have IWC Tag Champs Bearded For Your Pleasure taken on more than they can handle, with the Fraternity, the Founding Fathers, and now the Gambinos knocking at their door on December 12th?! 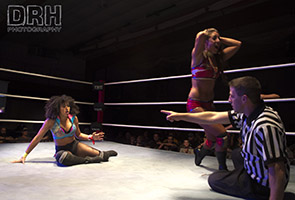 The IWC Women’s Division heated up as Ray Lyn and Britt Baker competed in a “Pick Your Poison” challenge, where each girl would choose the others’ opponent. Baker chose the tough-as-nails Angel Dust to take on Ray Lyn, and it was a fight for the “Miley Cyrus of Professional Wrestling”. A ringside distraction from Marti Belle allowed Ray Lyn to hit Angel Dust with Marti’s lollipop. Later on, Baker took on Belle, and it was the biggest challenge to date for the Iron City Wrestling Academy graduate. Ray Lyn tried to be a distraction at ringside for Marti, but it backfired, which allowed Baker to roll up Belle and get the biggest win of her career yet! Tensions were still high after the bout, so IWC owner Justin Plummer decided things would be settled between the four girls in IWC’s first-ever all-women tag team match! On December 12th at Winner Takes All, it will be Ray Lyn 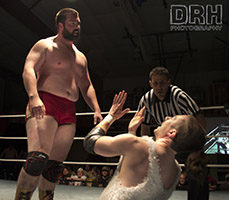 At the beginning of the night, Justin Plummer tried to address the crowd regarding Team LaBar, only to be interrupted by LaBar himself, along with Team LaBar members “Big Time” Bill Collier, Wardlow, and, of course, IWC World Heavyweight Champion Rhino. After trying to intimidate the boss, Team LaBar was confronted by IWC’s resident bouncer, the 6’6″, 300lb. Bulk Nasty! Unfortunately for Bulk, he was attacked in the aisle by the STDs, then laid out by Team LaBar. Chest Flexor took advantage of the attacks and started his match with Bulk right then and there! Bulk fought valiantly, but after taking a bowling ball to the head from the 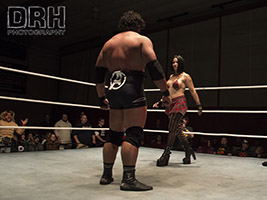 returning “Kingpin” Brian McDowell, it was academic, and Bulk suffered his first loss in IWC!

Team LaBar member “Big Time” Bill Collier competed against Amazing Race: Canada star Asylum. The two hosses were throwing each other across the ring with suplexes and slams, until once again, Labar & Wardlow made their presence known. The referee caught them red-handed and ejected them from ringside, allowing Asylum to pick up the victory with his vicious Doctor Bomb. After the bout, he claimed to kill the Dead Wrestling Society and threw his name in the hat for a future title shot. Right then, a female minion of Krimson appeared and spit some kind of red viscous liquid 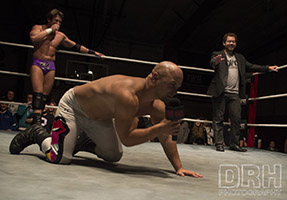 into the eyes of Asylum! Krimson appeared on the big screen with a warning for Asylum that you can’t kill him!

“DeeeeeeeeeLicious” Jimmy DeMarco returned to Court Time Sports Center at Unbreakable during Darin Dinero vs. VIP Joe Rosa, looking to get a kiss from Rosa’s girlfriend, Ms. VIP Ashley. Just when it seemed Rosa was about to drop his top rope elbow, DeMarco appeared to the soothing sounds of “Kiss The Girl” from The Little Mermaid. This was enough of a distraction to allow Dinero to pick up the victory. Ashley escaped DeMarco’s grasp, but the “Prime Minister of Perversion” challenged Rosa to a match at Winner Takes All! IWC owner Justin Plummer signed it, and if Rosa loses then DeMarco finally gets his kiss from Ashley! But, if Rosa wins, DeMarco will have a restraining order to keep him away from Ms. VIP! 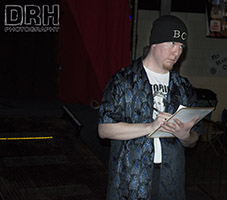 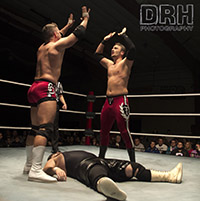 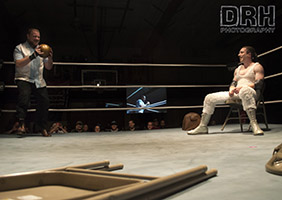 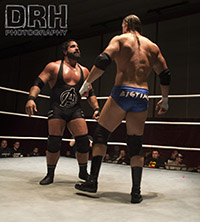 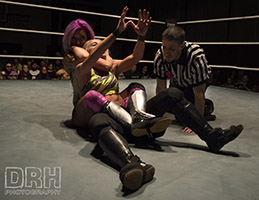 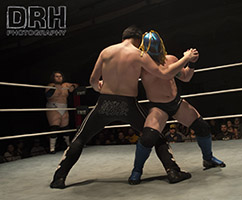 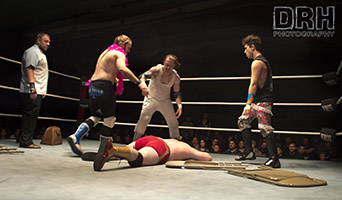 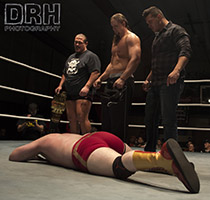 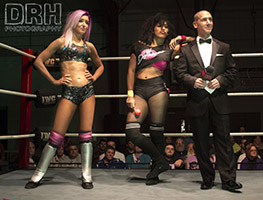 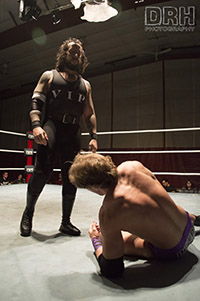 For more Unbreakable images from Daniel Hooven, visit the album on our Facebook!