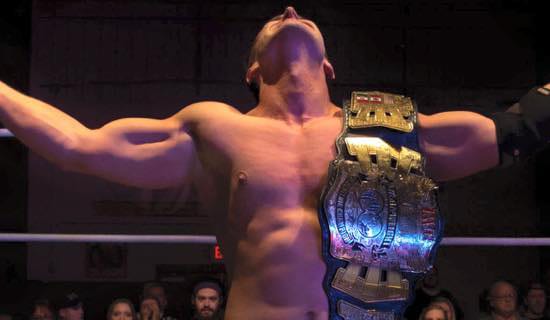 December always seems to be an important month in the International Wrestling Cartel – a time where athletes look to end the calendar year emphatically, and build momentum for what will be another arduous year to come. 2015 at the Court Time Sports Center in Elizabeth, PA certainly more than lived up to expectations set by that high benchmark, as IWC Wrestling presented one of its most violent, newsworthy, and emotional events in recent years!

The main event in itself was historic, as a Ladder Match would decide the IWC Championship for the very first time. John McChesney, in his first title defense following a two-year drought from IWC gold battled someone whose name has been linked to McChesney, some would even say in the shadow of McChesney, since he first appeared in IWC, Jimmy Nutts. After the double-pin and multiple-overtime scenario that occurred this past October at IWC Unbreakable, we all knew drastic means would need to be taken ti determine a conclusive winner as McChesney looked to re-assert himself as the measuring stick of IWC, and Nutts looked to raise the bar further and usher in a new era. For two men who within the past 18 months had to face the mortality and potential demise of their IWC career head-on – Nutts due to a career-threatening knee injury and McChesney very nearly forced out of the organization by Justin LaBar (who was banned from the building on this night). Both men engaged in a highly physical and risky battle, which seemed to take an ugly turn as Nutts risked everything to drop an elbow to McChesney from 12 feet above on a ladder… and McChesney moved out of the way allowing Nutts to crash through the table to the floor. It seemed Nutts had re-aggravated the prior knee injury that nearly cost him his dream, and as Nutts was carried from the ring, even John McChesney seemed to show a bit of compassion. Undeterred, and on one leg, Nutts literally hopped back into battle and with only one leg, sent McChesney crashing and began the ascent to a dream turned into reality. Jimmy Nutts, the young kid who was 100 lbs overweight and constantly bullied, was able to achieve his dream in front of family, friends and fans as he was crowned IWC Champion. An impassioned Jimmy Nutts addressed the hundreds of onlookers chanting his name in one of the most raw and emotional moments in IWC history, before sharing a hug with perhaps his biggest supporter, his mom. With an amazing success story culminating in championship glory, will Jimmy Nutts now be able to hang on and continue to build his legacy not as a dreamer or lackey or contender, but as the definitive man in IWC?

That wasn’t the only championship to change hands as Andrew Palace once again captured the IWC Super Indy crown, surviving the ultimate of personal risks, staking his hair against the championship of incumbent titleholder Dylan Bostic. Both men gave it their all, as the dark cloud of Bostic’s win streak over Palace loomed over the challenger’s head, as Bostic zeroed in on the back of Palace, negating much of his offense. As has been the case in ever case beforehand, Bostic had several dirty tactics in mind to protect his title, namely the use of the Super Indy Championship belt & the involvement of Ray Lyn, but the involvement of both were negated thanks to Benjamin C. Steele, who was once again mysteriously at ringside though reports had circulated he was courting Andrew Palace as a possible client. With the title out of play and Lyn ordered to the back by the official, Palace finally had the one thing he had wished for for over six months – a fair shot one-on-one vs. Bostic. Palace was able to dig deep and connect with not one but two Hernia Drivers to secure a victory and finally prove he was the better wrestler of the two. As Andrew’s moment began to sink in, BC Steele proclaimed he was here in IWC to manage the greatest Super Indy Champion of all time…. yet Mr. Steele wasn’t referring to who we all thought he was. Chris LeRusso, a rising area competitor who has competed on several Ring of Honor cards in recent years, emerged from the crowd, dropping the exhausted newly-crowned champion Palace on his head twice. BC Steele seems to have proclaimed LeRusso the “heir apparent” to the Super Indy Championship, and will represent him moving forward, but there will no doubt be several very angry competitors who will object to this claim, not the least of which will be Palace himself.

As for Dylan Bostic? Has loud complaints and immediate rematch demands got him in even more hot water. IWC Owner Justin Plummer wouldn’t grant the rematch, but he did subject Bostic to IWC’s newest annual tradition – The Reset Button. This randomization tool led to some very unique and shocking matches and moments this past January, and it wasted no time creating a shocker for this coming January. The Reset Button was pressed to determine Bostic’s opponent and it turned out to be…. Former Degeneration X member & NXT trainer Billy Gunn?!

New tag team champions were crowned in a wild four-way battle as Channing Decker & Trent Gibson, The Fraternity, made their “Fraternity is Eternity” claim true, as they entered the IWC record books as new champions, defeating previous champions Bearded For Your Pleasure (Jock Samson & Bryan Castle). The two other teams in the equation, The Founding Fathers & Gambino Brothers found themselves in a personal and uncontrollable brawl that spilled far enough away from the ring to see the Fraternity capitalize on the distraction, with Gregory & Mickey Gambino battling on the steel ramp while Marshall “The Bull” Gambino sent Super Hentai plummeting through a table in our tech area. After the match, tempers only heated up further as members of the legendary IWC team Sexual Harassment, Eric Xtasy & Justin Idol, who were on ringside commentary, had a rather sarcastic bit of applause for fellow tag team legends The Gambinos. Both teams had a lengthy and very public argument on social media recently regarding who is the greatest team in IWC history and both have a gripe – Mickey & Marshall are 5-time champions, more than any two men in IWC history, meanwhile Sexual Harassment has 7 reigns spanning four different members, five of those reigns involving Eric Xtasy, The words quickly turned to physicality and another brawl spilled across the building. Could we see these two teams, once thought to be part of IWC’s past forever, take this rivalry into the ring officially?

“DeeeeLicious” Jimmy DeMarco regrettably came up short in his Kiss vs. Restraining Order match with VIP Joe Rosa. It seemed for a time that Rosa’s aggressive nature toward DeMarco, plus DeMarco’s weeks of letters, gifts, and music videos had helped sway Ms. VIP Ashley to changing her tune about the Perpetual Pervert of Pittsburgh, but it proved to be a ruse, as DeMarco was outsmarted, low blowed, and had his heart broken all in one motion thanks to Team VIP.

Speaking of broken, “The Embodiment of Evil” Krimson and Asylum nearly broke their bodies in half with a violent No Disqualification war that saw trash cans, kendo sticks and several mangled chairs. Krimson proved to live up to his reputation as a sick and sadistic creature, but Asylum’s temper and rage drove him through the battle and eventually to victory.

So many top IWC stars are poised for a huge 2016 if this night was any indication. Who can make the most of this momentum and continue to climb the ranks as we begin another unpredictable new year in the International Wrestling Cartel?