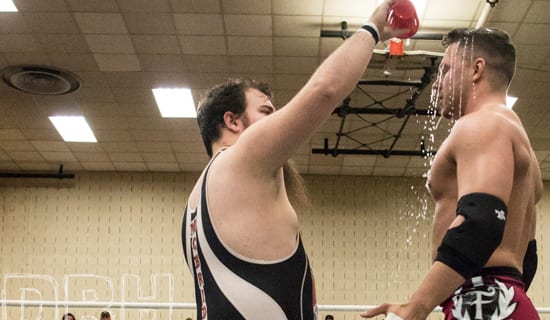 Each year, the IWC gives newcomers a chance to shine and show why they deserve a spot on the roster. While Rural Valley got to see the potential of the new blood that is infusing IWC with fresh talent and drive, it also got to see one of the newer faces show that he is on his way to the top of the rankings.

Darin Dinero, having earned a title shot at the WINNER TAKES ALL! Proving Ground battle royal, was able to match up with the recently crowned Jimmy Nutts for his IWC World Heavyweight Championship. The “Man with the Golden Hips” and the World Champ started off in a very respectful contest, with clean breaks and a standard catch as catch can matchup. However, knowing that title shots are few and far between, the intensity and motivation was ratcheted up with every hammer lock and arm bar until, backed into a corner, Dinero slapped Nutts. Not one to back down for a clear challenge to his position, Nutts took it to a higher gear with Dinero right beside him. Dinero stayed shot for shot with Nutts until Nutts hit a pair of cutters to put Dinero away. With the lack of distractions (such as the rivalry with former Champ John McChesney or the vendetta being carried on against him by Justin Labar,) Rural Valley got to see Jimmy Nutts get to concentrate on what he does best: being a champion-caliber athlete willing to answer any challenge put before him in the IWC. While Darin Dinero didn’t get to leave with the title that night, after Saturday’s showing I imagine we will see him competing for the title again sooner rather than later

The Platinum World tour touched down in Rural Valley as well. Dylan Bostic, with Ray Lyn in tow, stepped into the ring to challenge the debuting Shane InYaFace. Shane, an MMA-trained fighter who is looking for some success in the world of professional wrestling, was in peak physical form. However, pro wrestling presents its own unique sets of challenges from the octagon. Dylan, knowing Shane’s inexperience in this new environment, took full advantage of these differences and based his offense on them. Dylan repeatedly went for rope breaks and would leave the ring, often to take time to make out with Ray Lyn. Shane made no effort to hide his frustration with this and took off after Dylan. Finally getting him into the ring, Shane was able to show what his MMA background brings to the table. Multiple times Ray Lynn would interfere, distracting the referee twice while Shane had Dylan tapping out to a Dragon sleeper. Finally, Ray Lyn came in to interfere and Dylan, seeing his opportunity, grabbed a chair from the audience and drove it into Shane’s stomach and back before tossing his weapon out of the ring and gaining the three count.

Ray Lyn, hand in a wrapped cast, had no problem making sure her man came up victorious, despite being outmatched against the physically dominant Shane InYaFace. However, when it came time for her to face the target of her recent antimony, Britt Baker, Ray Lyn was quick to point out that she was unable to compete. However, she had a proxy for tonight: Morgan Rockafeller. Rockafeller, a longtime standout in Pittsburgh area women’s wrestling, made her IWC debut by attacking Baker from behind and throwing her into the ring. She took to Baker with a barrage of strikes, all with Bostic and Ray Lyn at ring side, cheering her on. As the tide would turn in Baker’s favor, both members of the Platinum World Tour had no problem interfering, both as distractions and occasionally physically getting involved. With the bitter taste of that behavior still in his mouth, Shane InYaFace re-emerged from the back and chased off Bostic. While not the victory she was looking for, Baker was able to get the roll up on Rockafeller and scored the pinfall. Ray Lyn’s reckoning with the Mayor of Brittsburgh is coming, and Baker showed that she will go through whoever is put in front of her to get her hands on Ray Lyn one more time.

In the discussion of the greatest tag teams in IWC’s long and illustrious history, the two names that always float to the top of everyone’s top ten lists are the Gambino Bros. and Sexual Harassment. Tonight, in an effort to find out which one deserved the top spot, the recently reformed Sexual Harassment and The Gambinos locked up one more time. The two teams were still at the top of their prospective games, with Sexual harassment trying to counter the Gambino’s raw power and dominance with psychological head games and speed. Both teams pulled out all the stops, but there was no clear cut winner as members of the Founding Fathers hit the ring. Apparently upset that they weren’t considered in the discussion, they jumped both teams, beating former Founding Father Justin Idol and Mickey Gambino into the back, leaving Eric Xtasy and Marshall the Bull to trade a few more shots (and a giant, Platinum World Tour-worth kiss from Xtasy) before Marshall fell onto a ringside table. Xtasy, with opportunity on his side, delivered a heavy elbow drop onto the prone Marshall before making his way to the back. Instead of settling any hypothetical question, it seems the debate is far from over between the Gambinos, Sexual Harassment and the Founding Fathers.

Bulk Nasty decided it was time to fight numbers with numbers against the STD. For his match at Proving Ground, he assembled Planet Bulk. The members of planet Bulk included the debuting Santana Diamonds, Remy LaVey and former STD (and current Super Indy Champion) Andrew Palace. Ready for battle, Planet Bulk wasn’t prepared for what happened next: STD leader Chest Flexor announced a fifth man for his team, having leased the services of Team Labar member Wardlow. Wardlow marched to the ring and, in a show of intimidating strength, tore the top rope from its moorings before the match even began. Warlow, happy to incite the chaos that followed, quickly tagged out. While both teams had to quickly adapt to wrestling without Irish whips, corners or top rope offense, Planet Bulk had the additional challenge of quickly adapting to being in a handicapped situation in a 5 on 4 tag match. After some solid back and forth from both sides, Planet bulk finally started to get an upper hand. Bulk, realizing it was up to him to eliminate the Power and size of Wardlow, engaged him in a slugfest that saw both men fight their way through the curtain while with match was still on. With the size element removed, the remaining members of Planet bulk took over and made short work of the STDs. Santana Diamonds got to pick up a win in his wrestling debut as a member of Team Bulk, but one has to wonder if score is truly settled between either side.

Jack Sheridan has always has the advantage in society. Blessed with genetics, athletic ability and affluence, Sheridan had no problem transferring from the country club to becoming a stand out athlete at Northwestern University. It would make sense to him that transferring from college athlete to IWC competitor would be a simple move. You could see the confidence oozing off of him as we made his way to the ring. Unfortunately, so could his opponent: Dennis Gregory, a member of IWC’s Founding Fathers. While Gregory was dwarfed by Sheridan’s 6’8” frame, this was nothing new to Gregory. Many have said that were Gregory a super Hero, his power would be “winning.” It was that level of experience that allowed Gregory to counter and frustrate the Sheridan. After several minutes of Gregory having the counter for Sheridan’s offense Gregory countered a charge with a superkick and scored the win.

The Fraternity, with their combined SAT score of over 4000, stood in start contrast with the Blue Collar Slaughterhouse. After declining the drink offered to them by the Fraternity (via pouring it all over Channing Decker’s head,) BCS proceeded to match their brawn against the Fraterity’s cunning nature. While Slaughterhouse unloaded on the Fraternity, the Tag Team Champs were able to prevail after hitting the Keg Stand and scoring the pinfall. It was another hard hitting affair that we have come to expect when Blue Collar Slaughterhouse and I imagine the team of Bronco McBride and Matt Segaris haven’t squared up to Channing Decker and Trent Gibson for the last time.

Chris LeRusso made his in ring debut at Proving Ground. Having made both his presence and intentions known at IWC during Winner Take All, LeRusso looked to begin his march toward Andrew Palace and the Super Indy Title. With Benjamin C. Steele in tow, LeRusso looked to make his mark not only defeating IWC mainstay Keith Haught, but humiliate him. After getting the advantage, he called for the microphone mid-match and proceeded to inform the crowd just what Haught smelled like (ham.) Before he could finish his thoughts, Haught had a witty retort in the form of a hard upper cut. Haught had things in control and probably would have got the victory had his attempt at the Haught Mess connected, but LeRusso rolled out of the way and picked up the win with the snap mare driver. Feeling that he hadn’t mad enough of a statement, he continued his assault of the recovering Haught, stomping and kicking him until his former tag partner Remy LaVey came out and made the save. While Haught was spared, LeRusso may have found his next run on the ladder to the IWC Super Indy title.