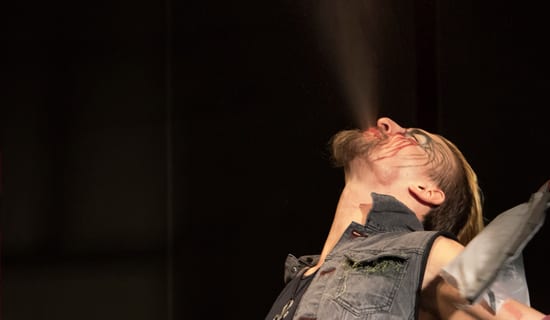 Emotions ranged wildly and ran high on a night all about honoring IWC’s past, present, and future. It was a night to celebrate where we had been, but to also look boldly ahead to where we are going. This is IWC Fifteen.

The main event saw current IWC Champion Jimmy Nutts head into battle with the same heart, desire, and dedication that led him to a career-making year and inspirational championship victory, as he prepared to meet a former 2-time I 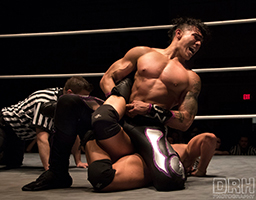 WC Champion, the youngest IWC Champion in history, and the only IWC Triple Crown Champion (twice!) in history, DJ Z, affectionately known to long-time IWC fans as his initial name of Shiima Xion, but by any name, DJ Z came prepared to make history. The two engaged in one of the all-time great title defenses in IWC history, an ultra competitive exchange that led to a standing ovation from a spill-over crowd for its dramatic final moments. A tense and awkward moment early that saw Jimmy Nutts gingerly tend to his knee was the only opening the young veteran Z needed to pounce. A courageous Jimmy Nutts fought onward valiantly, but the match ended with a visual many fans thought they wouldn’t see – Jimmy Nutts tapping out, making DJ Z the new THREE-TIME IWC Champion! Following the match, the moment turned somber as Jimmy Nutts revealed an agonizing secret. Jimmy has injured his knee in his championship-winning effort against John McChesney last December during the Ladder Match main event of Winner Takes All, but it wasn’t until well later when Jimmy would learn of the severity – complete damage to his ACL, MCL, and meniscus, and mandatory surgery ahead. Jimmy refused to relinquish the title he’d worked his entire life to attain, however, and vowed to defend the title until being defeated for it. An admirable and beyond courageous fight, but one that came to an end in bittersweet fashion. As Jimmy attempted to say goodbye to the IWC fans, the selfish RJ City interrupts Jimmy’s moment and tries to make it all about HIM, choosing to pick this time to complain about his own standing in the championship picture since losing the IWC Title a year ago. This brought out the equally egocentric Dylan Bostic, who felt the need to explain how he felt this was HIS time to hold IWC gold. As the two would-be challengers bickered, they ultimately decided to make a statement at the expense of Jimmy Nutts, entering the ring and immediately assaulting Jimmy’s injured knee. DJ Z returned to fend off City & Bostic and avoid further injury to Jimmy, who certainly earned the respect of DJ Z and further cemented himself as one with the will of a true champion. While the IWC Championship picture begins to take shape, Jimmy Nutts’ road is one of less certainty, as the agonizing road to recovery begins. We at IWC extend our thoughts to Jimmy in the hopes the he’ll be able to live up to his promise, to return to IWC better than ever, as soon as his health allows.

The IWC Super Indy Championship near 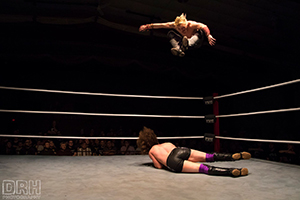 ly changed hands thanks to another returning star as reigning champion Andrew Palace defended against former IWC Tag Team & Super Indy Champion “The New Age Plague” Gory (formerly known as Jason Gory). Palace’s resiliency was on full display as Gory, who has seemed to come and go as he pleases in recent years but this time seemed content to add more gold to his resume, amazed those in attendance with both his devil-may-care high-risk style as well as his animalistic, carnivorous, and bloodthirsty nature. A resourceful Palace was able to wiggle free from Gory’s Trepidation piledriver allowing Palace to connect with the Hernia Driver to win a very narrow contest and continue to build his legacy as one of the most prolific Super Indy Champions in recent years. When (if at all) will we see Gory come back to further infect IWC rings? Who will be the next challenge for Andrew Palace and the Super Indy Title?

The International Wrestling Cartel has long been known for its deep, diverse and entertaining tag team division and p 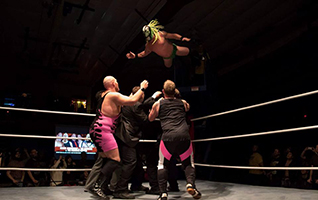 erhaps the three greatest teams of the fifteen year history of this organization met for the very first time in a three-way battle. Sexual Harassment, represented here by Eric Xtasy & Justin Idol, a four-man dynasty responsible for six IWC Tag Title reigns, The Gambino Brothers, who have the most tag title reigns of any two men in IWC history with five, and The Founding Fathers, the faction that dominated the 2010s and represented by two men, Dennis Gregory and Super Hentai, who were also flag-bearers in IWC singles competition for many years. With the psychological games of Harassment, the unbridled aggression of The Gambinos, and the all-around tenacity of The Founding Fathers, we were treated to a wild and unpredictable war to determine the greatest dynasty in IWC history. Names from the past emerged unexpectedly, Flexor & Ferrari to aid the Gambino Brothers, “Balls Hot” Troy Lords to help Sexual Harassment, in an effort to make sure the dynasty they helped build emerged victorious. Super Hentai, always known to throw caution to the wind to fight for what he believes in, hijacked the scissor lift used by the spotlight operator, drove it to ringside and dove from 15 feet off the ground onto his opponents in the ring. At the conclusion of this war of attrition, The Gam 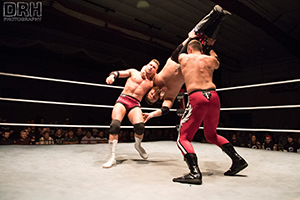 binos stood tall and victorious, further cementing their legacy and perhaps even their future, but the one most notable thing at the conclusion of this match, from competitors and fans alike, was respect. Respect for six men who risked their livelihoods to fight for a cause, and six men who have sacrificed for years to help build the IWC brand into what it was, is, and will be in the future.

In the tag team title picture, champions Channing Decker & Trent Gibson were able to defeat former champions Jock Samson & Bryan Castle, Bearded for Your Pleasure, with the double team maneuver they call the Keg Stand. The obnoxious and loud champions were off to another Solo Cup filled celebration, however tensions escalated as Jock & Castle showed their frustrations toward one another for a moment before reconciling. Will these bearded brutes be able to work their way toward another tag title opportunity? 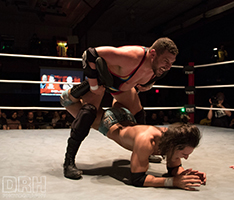 RJ City made his long awaited IWC return, though perhaps didn’t appreciate the circumstances that he had to obey to have the motion granted – to finally meet Colt Cabana one-on-one following a locker room altercation the two had in 2014. Colt is vital to IWC history, a former IWC Champion and winner of Super Indy 2, but RJ, both during his Super Indy Title reign and now, had and has zero respect for those who came before him, or really anyone aside from manager Justin LaBar and fellow Team LaBar member Wardlow. The presence of the massive Wardlow was flagrant, with LaBar constantly distracting the official so the behemoth can get involved, but the equally imposing Bulk Nasty appeared to neutralize Wardlow, as the two brawled to the locker room. This left LaBar and, in spite of Colt’s best efforts to contain him (literally dragging him out of his shoes and into the ring), the numbers game still became an issue. As Colt threw one of LaBar’s shoes far across the building, the other shoe dropped. RJ used the hideous footwear as a weapon and it helped RJ pick up his first win back on the IWC roster. 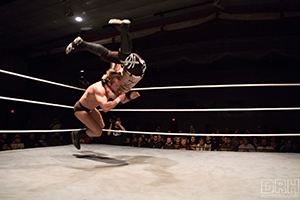 Darin Dinero did a lot to earn respect in his own right, earning a victory over one half of the longest reigning IWC Tag Team Champions in history, former Irish Airborne and current Ohio Is 4 Killers member Dave Crist, who returned to IWC perhaps in the best shape of his career. Both men put it all on the line in this, the first qualifying match for Super Indy 15 this June. Darin was forced to relinquish his Super Indy spot a year ago, but this year is his own man and will achieve a dream of his own as he enters one of professional wrestling’s most prestigious tournaments this summer. 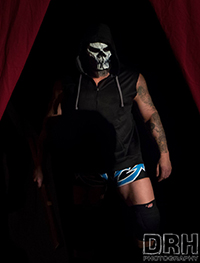 Newcomer Shane “In Ya Face” brought the same no-fear attitude that led him to an undefeated record in professional mixed martial arts into the ring at IWC Fifteen, as he planned to call out “Swaggy D” Dylan Bostic after Bostic’s controversial win over Shane at Proving Ground, but things quickly spiraled out of control from there. Dylan was nowhere to be seen but who was? Jon Bolen! The long-time IWC powerhouse came through the curtain angry and looking for a fight, and seemed to choose Shane to attempt to make an example out of. The rookie held his own with the huge Bolen, but Bolen’s temper saw him stoop to a low-blow and see immediate disqualification. As Bolen continued taking his aggression out on Shane after the bout, we saw our final ominous “Rapture” video that has been appearing, and we found out the man those videos were referring to… Jimmy Vegas, former 2-time IWC Champion, looking larger and more focused than ever, bee-lined to the ring, ax-handle in hand, ready for a fight. A very physical exchange between Vegas and Bolen was separated by security, but they too felt Vegas’ wrath. With both Vegas and Bolen we have two IWC stalwarts apparently back and with a mission and have already targeted one another. 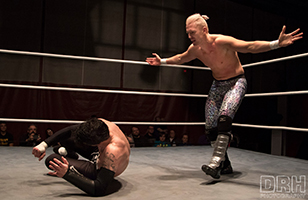 Moments later, and quite conveniently, only after Shane was helped from the ring, Dylan Bostic & Ray Lyn appeared ready to “accept the challenge”. While Shane was in no condition to compete again, another young man looking for an opportunity was – 21 year old Zachary Wentz. Wentz came with a very no-nonsense attitude, wanting an impromptu match with Dylan immediately, and impressed all with his athleticism. “Swaggy D” was able to pull out another victory, however, and continue a perfect 2016 thus far. 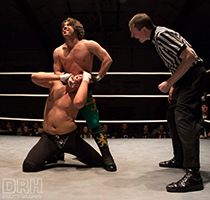 Chris LeRusso may consider himself the “heir apparent” to the IWC Super Indy Title, and continued to call out reigning champion Andrew Palace, but he and manager Benjamin C. Steele did themselves no favors in attempting to look past Remy LaVey. Remy came into battle with a focus and ferocity unlike that which we had seen from him before, and nearly succeeded several times in defeating LeRusso, including once when LeRusso was dropped due to Remy’s “Mind Eraser” for upwards of ten seconds, saved only by Steele’s distraction of t 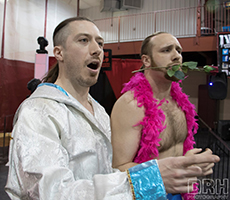 he official. LeRusso was able to edge out a victory and perhaps get one step closer to a future battle with Andrew Palace but has he earned enough to justify the rather lofty opinion he has of himself and his future in IWC?

In a special pre-show bonus bout, Keith Haught defeated Sexy Talented Dudes member “Kingpin” McDowell, before the STDs spent the rest of the evening disrupting the event from the balcony, upset over their lack of feature on the main show.

All roads now lead to Meadville as the legends come out for Night of Superstars. How will IWC’s finest fare against some of wrestling’s all-time greats? 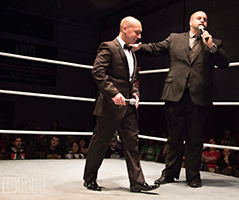 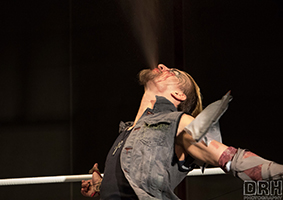 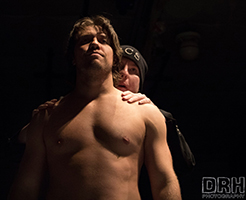 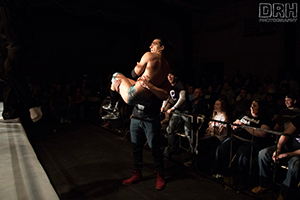 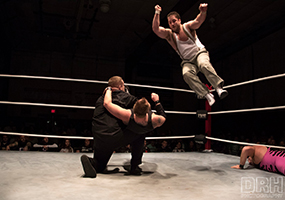 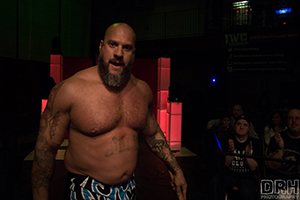