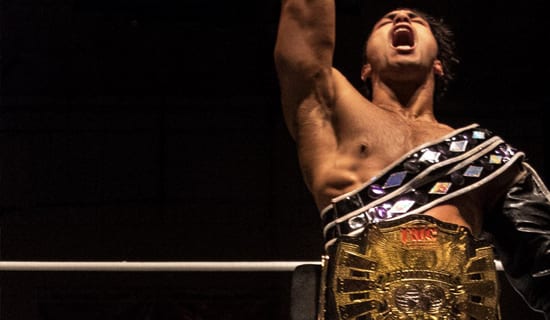 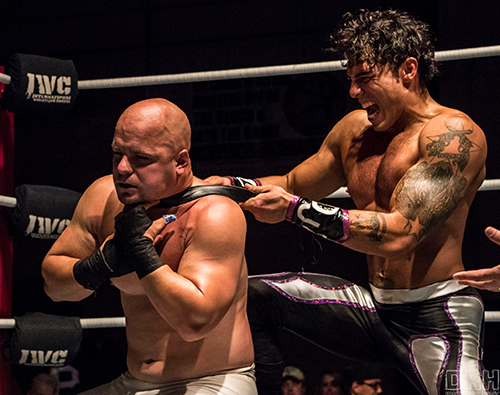 Fans couldn’t wait to see what the return of the Reset Button had in store for us, and with the original date for Reloaded in January postponed due to weather, the speculation had been building for months! IWC owner Justin Plummer welcomed the Court Time crowd and explained that each Championship would be de 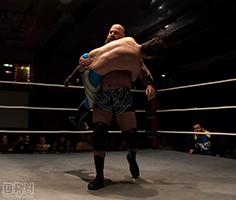 Virgil took the microphone, promising us tonight we were going to make a lot of memories and um… freak money. Corey Futuristic interrupted from the entrance way, apparently still hung up on the embarrassment Virgil caused him last year. Corey claimed he wouldn’t be embarrassed again and was coming for his revenge tonight, but Virgil had other plans for him and hit the reset button, setting up our first match of the evening. Fans were focused on the big screen as the Reset Button selected Jimmy Vegas as Corey Futuristic’s opponent! Vegas made short work of the Sexy Talented Dude from the future, gaining the pinfall victory and setting the course for the rest of the 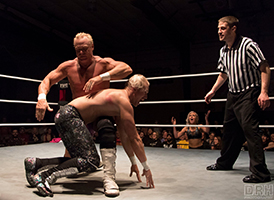 WWE Legend Billy Gunn was in the house as he faced “The Justin Bieber of Professional Wrestling,” Dylan Bostic. Bostic has been on a roll as of late and a win at Reloaded would surely rise his stock in the World Heavyweight Title picture he’s been clamoring for. Billy had fun with the fans at ringside, joining in on their anti-Bostic chants as The Platinum World Tour became more and more impatient. The two eventually did square off and a distraction from current IWC World Heavyweight Champion, DJZ (avenging Bostic’s interruption & callous assult of Jimmy Nutts moments after Z had defeated Nutts for the IWC Title this past March), allowed Billy Gunn to hit the Fame-Asser and pick up the win. DJZ showed Bostic he and Rae Lyn aren’t the only ones who can play that game! 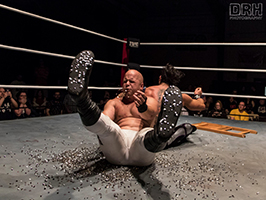 In the main event, the Reset Button selected the returning Delicious Jimmy DeMarco as the challenger in the IWC World Heavyweight Title match. DeMarco is very familiar with Champion DJZ as these two have had wars over the years in IWC and this match was no different! A back and forth contest turned ugly as chairs and thumbtacks were introduced, and then never left the match. DeMarco was bloodied and both men took spills on the tacks, but in the end it was DJZ who retained the Championship in one of the most hardcore matches ever seen in IWC! After the match, Bostic and Rae Lyn attempted to attack DJZ from behind, but before whatever plan they might have had could come to fruition, DJZ and DeMarco forced The Platinum World Tour in retreat and DJZ announced that at Super Indy 15 on June 11th, Bostic will get his shot at him for the World Heavyweight Title, but Jimmy Demarco will be in the champion’s corner! Will DJZ shut Bostic up for good at Super Indy or will this be the beginning of “The Summer of the Platinum World Tour?”

In the biggest Reset Button shocker of the night, “Big 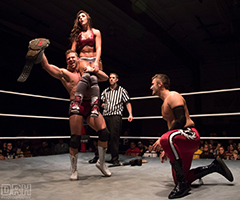 League” John McChesney and Britt Baker were chosen to face The Fraternity for the IWC Tag Team Titles! At one point it seemed the unlikely duo were about to become champions, but The Frat managed to get the win after hitting both of their signature maneuvers, The Eifel Tower and The Keg Stand, on Baker while keeping McChesney at bay. Proving once again what obnoxious jerks these two truly are, they continued to assault Britt after the match and eventually connected on a double team maneuver that saw Channing Decker land a kick on Baker right in the face! The Frat left the ring laughing as Britt was tended to by IWC staff and later treated for a concussion!

McChesney, extremelty frustrated and guilt-ridden over the events in question, swore revenge on all parties involved. It was announced later in the night that McChesney and a mystery partner will challenge The Fraternity for the IWC Tag Team Championships at Super Indy 15. On June 11th, McChesney can both avenge the cowardly attack on Britt Baker and finally achieve the Triple Crown in IWC he’s been striving for by becoming Tag Team Champion. 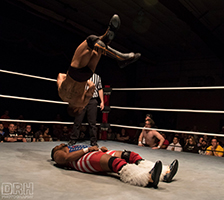 champion, Andrew Palace, last month at Caged Combat, he’s more convinced than ever. Justin Plummer made the match for Reloaded pitting LeRusso against three unknown opponents selected by the reset button in fatal four way match to qualify for the Super Indy tournament. Action filed the entire ringside area and LeRusso had his hands full with his three opponents, Timmy Lou Retton (a stand-out gymnast from the Carolinas), Dezmond Xavier (a rapidly rising high-flying star from Dayton to Philly and all points in between) and Alex Daniels (who had been gone from IWC for nearly a year, and who many say was still the rightful winner of Super Indy 14 a year ago). BC Steele did his best to ensure LeRusso’s victory, but the numbers game caught up to them, as LeRusso was busy brawling with Alex Daniels in the crowd, and Dezmond Xavier was able to score a pinfall over Retton and advance to 15th annual tournament. LeRusso was shocked! He couldn’t believe he had just lost his shot at the Super Indy tournament! It seemed as if “The Heir Apparent” was going to have to wait a little longer for his opportunity at the Super Indy Title against Andrew Palace.

Speaking of Andrew Palace, he successfully defended the IWC Super Indy Championship after a hard-fought contest 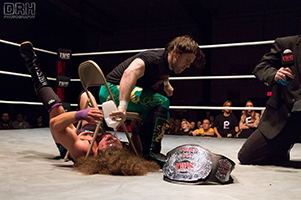 against Bryan Bowers, the Lance Storm product returning to IWC after well over a year away, selected by the Reset Button. The celebration was short-lived however, as Chris LeRusso and BC Steele returned to ringside and ambushed Palace from behind, pinning his neck to the mat with a steel chair! LeRusso demanded to be put in the Super Indy tournament or he would blind Palace as BC Steele revealed a bottle of peroxide! Justin Plummer ran from the back and pleaded with LeRusso not to do what he was about to do… He even agreed to enter LeRusso into the Super Indy tournament, which was what LeRusso wanted from the beginning, right? Fans at ringside shrieked as the calculating LeRusso poured the peroxide 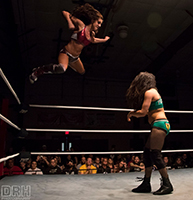 in Palace’s eyes anyway! IWC staff immediately hit the ring and covered Palace’s face with a towel as he whirled on the mat screaming in pain. What an uncomfortable atmosphere felt in the Court Time Sports Center at that moment… It’s very clear LeRusso is obsessed with becoming Super Indy Champion, and ending Andrew Palace!

Before her surprise selection into the Tag Team Title match, Britt Baker defeated NXT regular Deonna Purrazzo in a Women’s Division match setup at Night of the Superstars back in April. On that night, Purrazzo cost Baker the win in their triple threat match against Marti Belle and since then Britt had been waiting to face Purrazzo one on one. A back and forth contest throughout, I’m sure this isn’t the last time these two women will 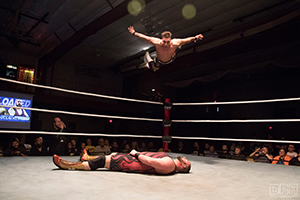 After months of tension, Bulk Nasty finally collided with Wardlow. Unfortunately for The Bulkster, Wardlow had Justin LaBar with him… This battle of the bulls was a straight up slugfest and we had a feeling it wasn’t going to last long. Bulk wasn’t impressed with the physique of Wardlow, and managed to hoist the near 300 pounder up for a delayed vertical suplex that had the crowd counting in their heads! As alluded to before, Bulk’s momentum was stopped however, after a distraction from LaBar at ringside led to Wardlow hitting a huge Swanton off the top rope for the victory! 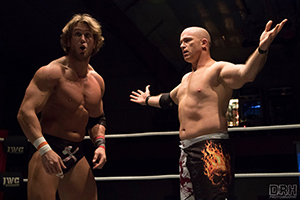 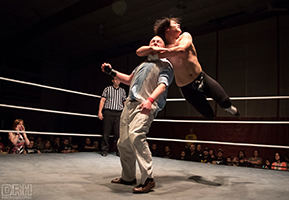 Other action saw Chest Flexor and Brian McDowell of The STDs defeat the former IWC Tag Team Champions, Keith Haught and Remy Lavey after interference from Marshall Gambino (and associate Pump Ferrari) at ringside. It’s clear Gambino’s frustration over the attention Haught & Remy have received instead of Marshall & brother Mickey won’t be subsiding until the “hit” is carried out in full.

Keep checking back here at IWCwrestling.com for the latest updates as the remaining entrants into the Super Indy Tournament will be announced later this week! Super Indy 15 takes place from the Court Time Sports Center on June 11th and in addition to all tournament matches will feature The Fraternity defending the IWC Tag Team Titles against “Big League” John McChesney and a mystery partner as well as DJZ, with “Deeeelicious” Jimmy DeMarco in his corner, defending the IWC World Heavyweight Title against Dylan Bostic! 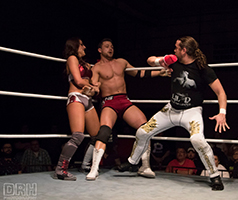 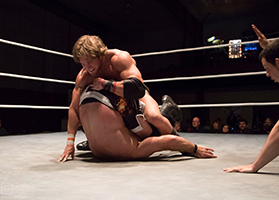 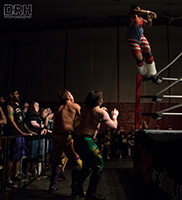 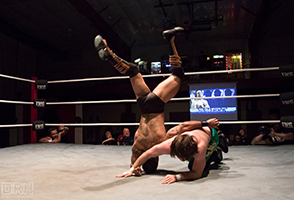 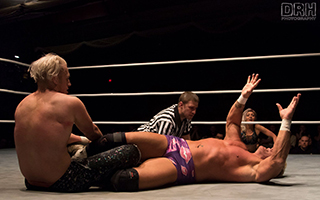 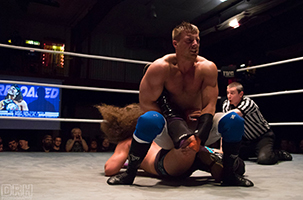 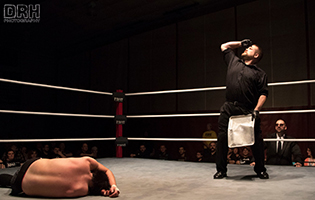 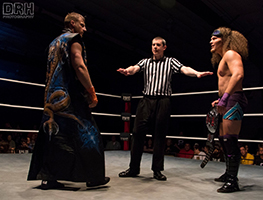 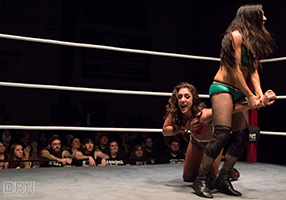 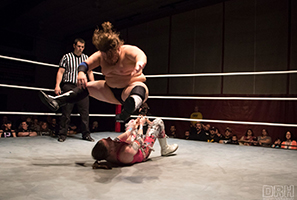 For more images from Reloaded 2.0, visit the photo album on Facebook!