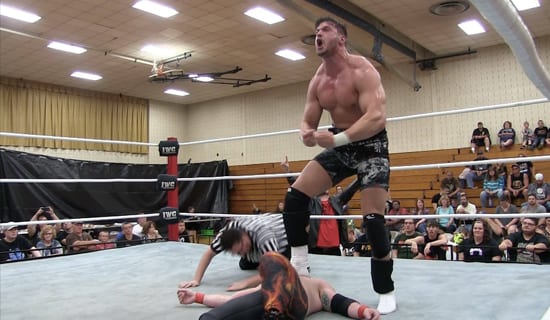 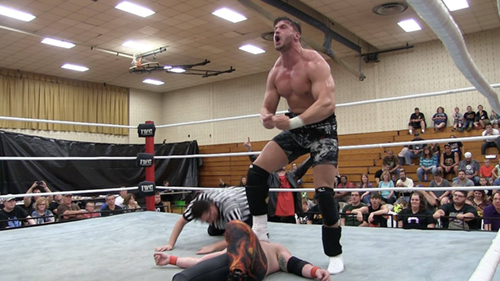 The fans came loaded with guitars, cookie sheets, vinyl records and cakes, impatiently awaiting the main event of the evening that would see a “Fans Bring the Weapons Street Fight!” It was IWC Rumble in Rural Valley this past weekend and the fans weren’t disappointed!

Marshall Gambino has been, in his words, “Trying to beat respect” into Remy Lavey and Keith Haught for months now. The two fan favorites have been moving up the ranks in IWC and Gambino felt they still hadn’t paid enough dues to be put in that top level spot. Multiple blindsided attacks and Gambino’s recent recruitment of Bronco McBride in his quest to humble Lavey and Haught would culminate in a “Fans Bring the Weapons Street Fight” in Rural Valley!

These four battled throughout the building and through the fans, grabbing whatever weapons they could get their hands on in the process! With the ring covered in thumbtacks, Keith Haught scaled up a ladder and delivered a devastating splash to Gambino through the table for the victory! Lavey and Haught, though bloody and battered, had proven they belong in IWC, but have they finally gained the respect of veterans Gambino and McBride?

With huge House of Hardcore implications, Chris LeRusso was able to slide past Gory and Alex Daniels in a fast-paced Triple Threat Match to determine the number one contender to Josh Alexander’s Super Indy Championship. It looked as if it could be anyone’s match to win early on and the fans were really starting to get into the action, but the clever veteran, LeRusso, was able to slide out of the ring and sit back and watch Gory and Daniels tear into one another while he rested and listened to words of wisdom from manager BC Steele at ringside.

The action continued in the ring and Gory was just about to pin Daniels for the victory when the always thinking “Heir Apparent” was able to slide back in the ring and dispose of Gory for just long enough to pin Daniels for the three count! LeRusso now moves on to October 15th at House of Hardcore to challenge Josh Alexander for the IWC Super Indy Championship at the Court Time Sports Center! In a post-match interview, Chris LeRusso promised his plan to become Super Indy Champion would finally come to fruition at House of Hardcore. We’ll see what “The Walking Weapon” has to say about that…

Bryan Bowers continues to get under the skin of the IWC fans. Constant reminders of not being the main feature on posters and complaints of low payoffs have blinded the fans to how talented “The New Hope” really is. This continued in Rural Valley as Bowers introduced Jaxon Argos and RC, two fellow graduates of the Lance Storm Wrestling Academy in Calgary, who quickly made it clear they were brought in to watch Bowers’ back.

It would be an unfair match from the get-go for Bowers’ opponent, the up and coming Santana Diamonds, who after a handful of tag team matchups, was competing in his first singles match in IWC. Diamonds came out fast surprising Bowers, coming close to victory on more than one occasion. Argos and RC would prove their value however, distracting the referee by standing on the ring apron throughout the match, and eventually grabbing the foot of Diamonds for the distraction in the corner, allowing Bowers to pick up the victory. After the match, Bowers took to the microphone and promised the IWC fans he will soon be wearing gold around his waist and with the introduction of Jaxon Argos and RC, “The New Hope” may have that gold sooner than originally thought.

Fans are still shaking their heads as to why Bulk Nasty turned on good friend Andrew Palace months ago. Bulk has stated on more than one occasion that it wasn’t anything personal against Palace, it was just business. Months of being underutilized in IWC frustrated Bulk to the point of making a career change, aligning himself with the arrogant Chris LeRusso and manager BC Steele.

“With this new business partnership and BC Steele doing my negotiating for me, I’ll finally get the opportunities I should have been given months ago,” said Bulk in a recent interview.

While some of that may be true, Bulk’s actions didn’t sit well with his former friend and Palace couldn’t wait to get his hands on the 300 pounder in Rural Valley! The match started quickly as Palace knew he had to go at the much bigger Bulk Nasty quickly and stay on the offensive if he wanted any chance to survive against the man referred to as “The Human Crime Scene.” His plan worked early on, but it was only a matter of time before the size differential, and a number of distractions from manager BC Steele at ringside, caught up to Palace and swung the momentum of the match in Bulk’s favor. It was clear if Palace wanted to win, or even walk out of Rural Valley on his own two feet, he needed to wear down the big man… out last him, and that’s just what he did!

Palace was bloodied, but scored the victory after a flurry of offense, culminating with a huge DDT, but the celebration was short lived. Just as Palace had his arm raised, Bryan Bowers and his fellow Storm Wrestling Academy graduates appeared in the entrance way staring a hole through Andrew Palace. They surrounded the ring teasing a 3-on1 attack, but decided it wasn’t the right time and returned to the locker room, still motioning that Palace is next on Bowers’ list.

It seems as though every time Andrew Palace settles the score with one of his foes another is lining up to be next to take down the 2015 IWC Wrestler of the Year, but it doesn’t seem to bother Palace as he keeps racking up the wins. And if it’s ok with him, it’s ok with us because Bowers vs. Palace is a match we’d all love to see!

But where does Bulk Nasty go from here? Since joining up with LeRusso and Steele, the big man hasn’t had as much success as one would have expected. Does BC Steele really have plans for the 300 pounder, or is he actually just keeping him on board to protect his top client, Chris LeRusso?

The never ending rivalry between Britt Baker and Ray Lyn was scheduled to come to a close the last time we were in Rural Valley for Proving Ground back in February, however Ray Lyn was injured shortly beforehand and the match had to be postponed. With her hand injury keeping her from competing in the ring for most of the year, Ray Lyn was by the side of her Platinum World Tour partner, Dylan Bostic, in his pursuit of the IWC World Heavyweight Championship. Unfortunately for the Platinum World Tour, Bostic lost his last match in IWC last month at Caged Fury and per the pre-match stipulation, was forced to leave IWC! Now with Bostic out of the picture and Ray Lyn’s hand injury fully healed, the match was finally set for The Rumble in Rural Valley. It would be their Final Encounter!

Even with Bostic gone, Britt would still be at a disadvantage as Ray Lyn had Justin LaBar with her at ringside. LaBar wouldn’t be a deciding factor however, and these two women put on a showcase for the IWC fans. It was a back and forth contest that had many believing Ray Lyn was about to pick up the victory when she hit her Ray-Cray-O finishing maneuver on Baker in the middle of the ring! Britt got the shoulder up at the last second in undoubtedly the closest near-fall of the night! LaBar, perhaps in panic mode, jumped up on the apron to provide a distraction, but instead ate a Superkick from Britt! The momentum quickly turned in Baker’s favor and she was able to pick up the victory one year in the making!

A heartfelt moment following the match saw Ray Lyn saying goodbye to the fans and hugging Baker in the ring as this would be her last match in IWC. Even through everything that’s happened, there lies respect between these two women. They have been the cornerstones of IWC’s Women’s Division for the past year and now it will be left on the shoulders of Britt Baker as Ray Lyn moves on in her career. If I know Britt Baker, she’ll be more than up to the challenge!

The Fraternity continued their winning ways, successfully defending the IWC Tag Team Titles against The STD’s. Two members of the Sexy Talented Dudes were signed for the contest, thanks to recently gaining the adulation of the IWC fans. Flexor and company had never gotten along with the IWC fans, but were able to sway their opinion the old fashioned way: by posting hilarious YouTube and Facebook videos throughout the summer! When these four came to the ring wearing matching red bathing suits in July at Wipeout, you’d have to be Judge Judy not to at least crack a smile!

Even though the STD’s were represented by Chest Flexor and Gary Larry Lee Ryans in the matchup, a win would see the Titles go to the STD’s as a whole! For a short time, we all marveled at the possibility of all four STD’s being Tag Team Champions at once. They could be the next New Day… the next Freebirds! It wasn’t meant to be, however. Channing Decker and Trent Gibson, though loud, obnoxious and annoying, picked up the win and continue to prove their dominance in the tag team division. Can anyone take the Titles from these guys? Maybe Fraternity IS eternity…

Jack Sheridan has reminded us on many occasions of his full-ride to Northwestern University and his family’s wealth, but money won’t get you wins in IWC and he needed one, bad! Coming off a loss to Jimmy Vegas at last month’s Caged Fury event, Sheridan needed a win in Rural Valley to prove to himself, and the IWC fans, that his father’s money wasn’t wasted on his training at the Iron City Wrestling Academy.

He would have a hard time preparing for his next challenge, however. The man he would square off against was a familiar face to IWC fans, but he was reborn. The former tag team mainstay had rechristened himself and was ready to start over, alone, as John Rodin!

Rodin had the fans in his corner from the opening bell and even matched strength with the former Collegiate Football player who outsized him by 10 inches and over 50 pounds! Maybe Sheridan should have used some of his family’s money to pay off Rodin and take a count-out win because he couldn’t gain control, and was eventually defeated by Rodin in what you’d have to call an upset! It appears that John Rodin has found himself, while Jack Sheridan is still trying to find his first win here in IWC!