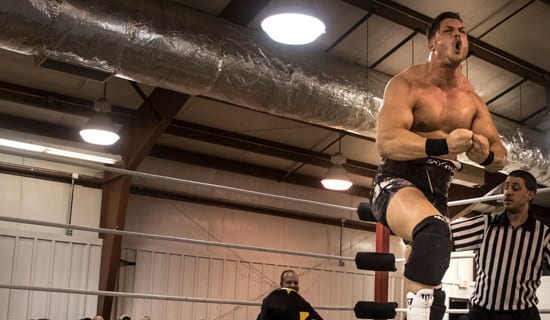 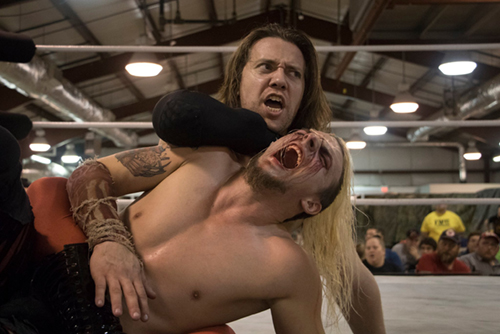 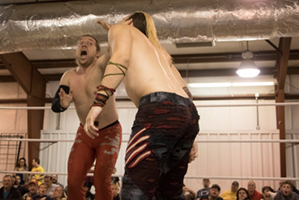 IWC returned to Clearfield this past Saturday to present Clearfield Carnage, the final stop on the road to Winner Takes All in December! The event was centered on two huge announcements and Chris LeRusso’s first defense of his newly won IWC Super Indy Championship.

LeRusso’s ten month journey to the gold culminated at House of Hardcore last month when he finally became the IWC Super Indy Champion. For his first Title defense, it was no surprise that IWC officials chose Gory to challenge for the gold at Clearfield Carnage. It was Gory who was well on his way to advancing to House of Hardcore back at The Rumble in Rural Valley in September when he faced Alex Daniels and LeRusso himself in a Triple Threat, number one contenders match. In that match, just as Gory was about to pick up the three count on Daniels, LeRusso threw him out of the ring and gained the pinfall victory himself! 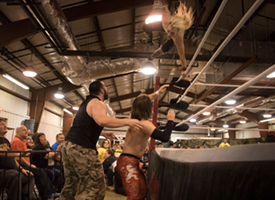 BC Steele and Bulk Nasty came to the ring with LeRusso, and just as it was in trying to capture the Championship, it remained the same in defending the Championship as we saw the same unfair, 3-on-1 situation we’ve seen all year. Gory was unable to overcome the odds, even with Bulk being sent to the locker room during the course of the match. It’s a shame too because “The New Age Plague” was well-prepared for this opportunity, matching LeRusso’s offense at every move and on more than one occasion coming so close to dethroning the arrogant Champion. Ultimately, BC Steele’s shenanigans helped LeRusso barely escape Clearfield with his Title. Who will be next to challenge LeRusso’s? Will Gory get a rematch? 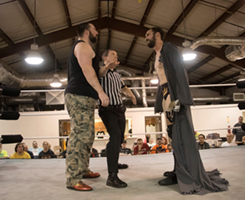 “The Reaper” Matt Conard in his IWC debut. Conard used to hang in the same circles as Gory, calling themselves “The Headless Horsemen” and thus, a perfect fit to oppose Bulk Nasty in Clearfield on the same night Gory would get his Title opportunity.

“The Human Crime Scene” dominated the majority of the match, though he was taken off his feet twice to the delight of the Clearfield Crowd. It was clear Conard wasn’t intimidated by the 300 pounder, but as time went on, Bulk was able to wear Conard down and pick up the victory with a devastating Powerbomb! Steele’s clients continue to ride a huge wave of momentum heading into Winner Takes All!

The first of two huge announcements in the evening came from IWC Owner Justin Plummer. He announced that at Winner Takes All, IWC will crown its first ever Women’s Champion! Plummer promised that IWC officials would search far and wide to find the best contenders and put them all against each other in a Fatal 4-Way match on December 10th.

Fans in attendance were then granted an exclusive, first look at the brand new Women’s Title belt! Who will be chosen for this golden opportunity and who will ultimately have the honor of being crowned the first ever IWC Women’s Champion?

With his team picking up the victory over Team IWC at House of Hardcore, Justin LaBar was granted the right to choose DJZ’s challenger for the IWC World Heavyweight Championship at Winner Takes All and he promised to make his decision at Clearfield Carnage.

Walking to the ring with the menacing Wardlow behind him, many began to speculate that “The Man with War in his Name” would be LaBar’s obvious pick to challenge for the Title shot on December 10th. Instead, chosen to challenge DJZ at Winner Takes all was RJ City, the man who scored the pinfall victory for Team LaBar at House of Hardcore. The main event was set for the final event of the year! 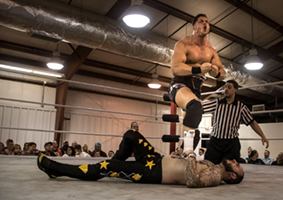 This didn’t upset Wardlow, however. LaBar hadn’t forgotten the big man, talking him up to the crowd and promising big things for the monster in 2017. Following LaBar’s seemingly never-ending endorsement, Wardlow made short work of his opponent, the up-and-coming Santana Diamonds, and continued to pummel the rookie after the match was over. The bell continued to sound as Justin LaBar then brought a table into the ring! The referee attempted to pull Wardlow off of the fallen Diamonds, which proved to be a costly mistake… Wardlow instead Powerbombed the defenseless referee through the table, an action that will surely cost him a hefty sum of money in fines!

LaBar’s big plans for Wardlow became clear sooner than we thought. He took to the microphone and promised Wardlow would become the most dominant force in all of IWC in 2017! LaBar then disrespectfully called out Jimmy Vegas, who he claimed had now been replaced as IWC’s top big man! The IWC mainstay answered the call and walked to the ring with a purpose, seemingly ready to go to war if need be. It took numerous Staff and Crew members to keep the two monsters separated, but we won’t have to wonder “What if?” because Justin Plummer announced a one-on-one showdown between the two for Winner Takes All! What will happen when two of the biggest men in IWC history meet for the first time on D 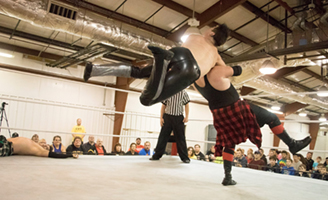 Remy LaVey and Keith Haught have had a roller coaster of a year in 2016. From winning the IWC Tag Team Titles at Night of the Superstars in April, to finally defeating longtime rival Marshall Gambino in Rural Valley in September, these two have certainly proven they belong in IWC. At Clearfield Carnage they faced the team of System Elite, Tyler Cross and Edric Everhart, two nasty bulls who came to IWC to make an impact at the 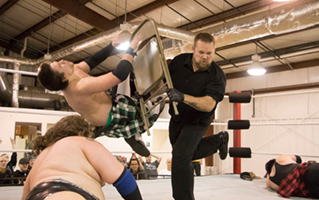 expense of the fan-friendly LaVey and Haught.

The former Tag Team Champions picked up the victory, but prepared for a fight immediately following the bell as Marshall Gambino appeared with a chair! LaVey and Haught weren’t backing down, but to the surprise of the Clearfield crowd, Gambino instead struck Everhart with the chair! He then took to the microphone and explained how over the last few months LaVey and Haught had earned his respect. They had earned their spot in the locker room and thanks to the two of them, Marshall Gambino can walk away from IWC knowing the Tag Team division will be in good hands for years to come! 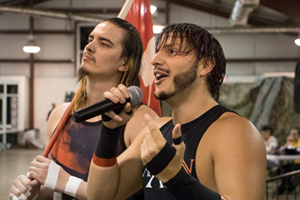 Andrew Palace couldn’t wait to get his hands on Bryan Bowers in Clearfield. Bowers had been politicking for a higher spot in IWC for months and called out Palace, one of IWC’s top stars, at The Rumble in Rural Valley in September. It was then that we were introduced to Bowers’ new lackeys, fellow Strom Wrestling Academy graduates Jaxon Argos and RC Dupree.

The two newcomers cornered Palace backstage a month later at House of Hardcore and talked him into accepting a Six-Man Tag Team Match at Clearfield Carnage! The only question was, who would Palace choose as his partners? It turns out we would never get the answer to that question as The STD’s interrupted Palace just as he was about to introduce his teammates.

A confused Andrew Palace stood in the ring impatiently while Chest Flexor, Brian McDowell and Cory Futuristic paraded around ringside. Flexor was all smiles as it was his Bachelor Party weekend and had Ginger documenting the night on their Go-Pro Camera. He reminded Palace of the great times they shared when Palace was a member of the STD’s himself and suggested they reunite for one night only in Clearfield to take down the Strom Wrestling Graduates. Palace looked like he was about to decline the offer, but Jaxon Argos and RC Dupree made their way to the ring before Palace could dismiss Flexor and company from ringside.

Argos and Dupree were alone, however. As it turns out, Bowers was never planning on coming to Clearfield. According to 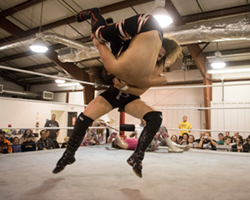 him, it was a B show in a B town and no match would actually be taking place. “The New Hope” was saving his presence for a “more important, bigger payday of a show.” This didn’t sit well with Andrew Palace, a man who shows up to every IWC event ready to perform regardless of his position on the card.

Perhaps feeling a sense of nostalgia, or most likely just to shut the mouths of Argos and Dupree, Palace challenged the two newcomers to take on him and Chest Flexor in a Tag Team match, to which the Strom graduates obliged. It was a fun match for the Clearfield crowd and fans even got to be a part of the action, delivering shots to Jaxon Argos as Palace dragged him for a complete lap around ringside! Palace and Flexor picked up the win and sent Bowers’ boys back to Canada with a loss, but the question remains: Will Andrew Palace ever get his hands on “The New Hope?” Bowers needs to show up first… 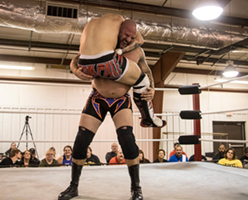 As mentioned earlier, Jimmy Vegas is one of the biggest men in IWC. He’s been dominant for over fifteen years. He’s a locker room leader and a seasoned veteran who’s faced every major name that’s come through the doors of IWC. While the thought of stepping in the ring with him is extremely intimidating, it’s also a huge opportunity. Nobody knew this more than Shane InYaFace. Shane came into IWC with an MMA background and isn’t easily intimidated, but he’s humble. He knows his place in the locker room and respects the veterans that came before him.

The match probably didn’t go exactly how Shane had envisioned it. He was outmatched and dominated by the much bigger and stronger Vegas in every way and was eventually pinned for the three count. Shane’s disappointment from the loss was erased quickly however, as he was helped up by Vegas after the bell. Vegas shook his hand and raised his arm up high. Though he was defeated, Shane had earned the respect of the veteran, something worth much more than a victory. Jimmy Vegas now looks ahead to December 10th at Winner Takes All when he meets Wardlow one on one!

In other action, John Rodin picked up a victory ov 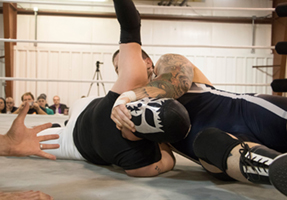 er the masked Noctus. But who is John Rodin? It’s a question we’ve been trying to answer for the past number of months. Since re-debuting back in September, Rodin is undefeated. And judging from the reaction he received in Clearfield, people are starting to take notice. I have a feeling if we keep an eye on this guy, we’re going to find out exactly who John Rodin is very soon!

Next up for IWC is our final show of the year, Winner Takes all on December 10th from the Court Time Sports Center in Elizabeth, PA. DJZ defends the IWC Word Heavyweight Title against RJ City, we crown the first ever IWC Women’s Champion, Chris LeRusso defends the IWC Super Indy Championship, Jimmy Vegas vs. Wardlow, and more! Keep checking back to IWCwrestling.com or log-on to our Facebook page for the latest updates on Winner Takes All! 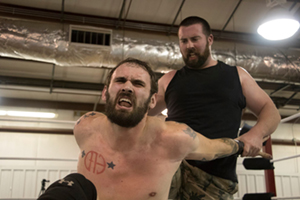 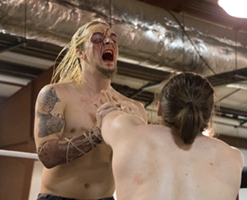 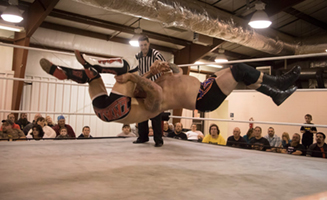 For more images from Clearfield Carnage, visit the photo album on Facebook!