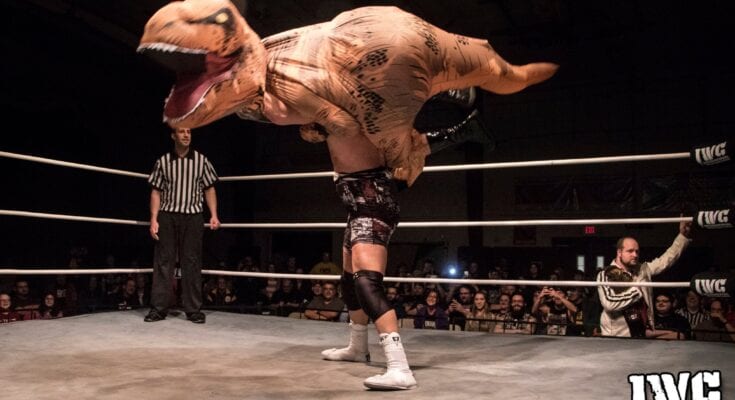 IWC returned to the Court Time Sports Center this past Saturday to present Reloaded 3.0! For weeks leading up to the event, fans grew eager with anticipation to find out who the Reset Button would select as challengers and participants in the nights matchups. The night had been planned to start off in a big way, opening the show with the IWC World Heavyweight Title Match! Wardlow and his manager, Justin LaBar, made their way to the ring, awaiting to find out who the Reset Button would select as the challenger in Wardlow’s first Title defense. It’s been said many times that anything can happen when the Reset Button comes into play and it couldn’t have been any truer than at this point in time! The Reset Button selected a Tyrannosaurus Rex! You read that right. Confusion filled the building as LaBar and Wardlow laughed it off until a giant T-Rex actually came through the curtain and made its way into the ring. A moment that will go down in history to say the least.

Needless to say, “The Man with War in his Name” wasn’t impressed and nailed the dinosaur with a right hand hard enough to send the flesh-eating beast back to prehistoric times. It was a quick victory for the Champion, and the record book will forever read that his first World Heavyweight Title defense was against a Tyrannosaurus Rex… pretty impressive.

LaBar and his Champion weren’t getting off that easy, however. Before they could make their way back to the locker room, familiar music played and the huge Shane Taylor appeared in the entrance way, returning to IWC after recently signing with Ring of Honor! Taylor challenged Wardlow to defend the Title one more time later in the main event against him and with some pressuring from Taylor and the Court Time crowd, the Champion agreed!

Taylor fared much better than the T-Rex did earlier in the night, lighting up Wardlow’s chest with multiple chops that echoed throughout the building! It was the first time in his IWC career that anyone had seen Wardlow outsized by an opponent and on the defensive as much as he was in this match! It’s a testament to how dominant the IWC World Heavyweight Champion truly is as he was able to finally defeat Taylor and retain the Championship. Starting off 2017 just as LaBar had planned, who, if anyone, will be able to take the Title from the undefeated World Heavyweight Champion?

In what was without a doubt the biggest shocker of the night, yes, even bigger than the T-Rex, ringside Photographer Daniel Hooven was selected by the Reset Button as a challenger for the IWC Tag Team Titles! Shocked at this revelation and terrified to get in ring, The Fraternity took advantage of Hooven and quickly began shoving the defenseless Photographer around like a couple of middle school bullies. The Tag Team Champions proved what shameless jerks they truly are, smashing Hooven’s expensive camera an even stepping on his glasses, breaking them to pieces.

One man can only take so much, however. With one last ounce of pride left inside him, Hooven attempted to fight back, surprisingly landing a few good shots in until Decker and Gibson eventually got back the upper hand. Someone needed to stop this humiliation and that someone came in the form of “Big League” John McChesney! The IWC legend made his return, clearing the ring of the obnoxious Frat boys, coming to the aid chaos, McChesney was able to capitalize and score a pinfall! John McChesney and Daniel Hooven were the new IWC Tag Team Champions!

McChesney had finally accomplished his goal of becoming a Tripe Crown Champion in IWC and in one night Daniel Hooven had gone from ringside Photographer to Tag Team Champion! The Court Time fans were elated that someone had finally gotten one over on The Frat! The celebration wouldn’t last long, however. It was announced that McChesney wasn’t actually selected by the Reset Button. He only came to the ring to save Hooven and therefore, wasn’t an official part of the match. Everyone knew what that meant… The Tag Team Titles would be awarded back to The Fraternity and the match would be thrown out.

This won’t be the end of the story, or Daniel Hooven’s in-ring career for that matter, as it was announced that McChesney and Hooven will team up, officially, at Proving Ground in February to challenge The Fraternity for the IWC Tag Team Titles! Gibson and Decker can’t wait for the chance to humiliate Hooven again, and McChesney has been obsessing over becoming a Triple Crown Champion for months now. But what is Daniel Hooven thinking? Does he really want to risk his health to become Tag Team Champion or does he just want this whole thing to be over and done with? And perhaps the most important question of all, if Hooven becomes IWC Tag Team Champion, who’s going to take our ringside pictures?

Chris LeRusso racked up another successful IWC Super Indy Title defense at Reloaded, and this may have been the toughest one yet as the Reset Button selected the former ECW World Heavyweight Champion, “The Franchise” Shane Douglas as his challenger! LeRusso’s manager, BC Steele, almost fainted at ringside when it was revealed who his client would have to defend the Championship against, but the always thinking LeRusso managed to escape the Court Time Sports Center by the skin of his teeth yet again. As in the majority of LeRusso’s matches, the victory came in part due to the antics of BC Steele and Bulk Nasty at ringside, as well as a steel chain LeRusso would use to smash into the face of “The Franchise,” knocking him out long enough for LeRusso to get the pinfall victory! It’s been clear for months that LeRusso is one of the fastest rising stars in all of Independent Wrestling, but one has to wonder the success he would attain without his camp watching his back at all times…

Jack Pollock made his official in-ring debut at Reloaded, successfully defeating Andrew Palace with the help of Team Storm. The numbers game had caught up to Palace, fighting a 3-on1 battle from the beginning due to multiple distractions from Jaxon Argos and RC Dupree at ringside. The match finally became a 1-on-1 contest when the referee sent Team Storm back to the locker room a few minutes in to the match, but they eventually returned, providing one final distraction, allowing Pollock to get the pinfall victory! Palace has demanded a rematch, but if he can’t get Pollock in the ring without Team Storm in the building, he may never get a true, fair matchup with “The Next Trending Topic.”

The momentum keeps rolling for Shane InYaFace after winning the Proving Ground Battle Royal at Winner Takes All. He has a Title Shot of his choosing in his back pocket and even acquired a new manager in the process, appropriately named Anya Face. At Reloaded, Shane would stand toe to toe with the final man to be eliminated from the Battle Royal in December, the 300 pound Bulk Nasty. The size differential came into play early on as Shane couldn’t get the big man off his feet! Bulk and his manager, BC Steele, were all smiles as they could feel it would be an easy night for their camp. The heart of the young upstart shined through however, as the “Human Crime Scene” was finally taken down and eventually choked unconscious by the former undefeated MMA fighter. Not even a late distraction from Super Indy Champion Chris LeRusso could help Bulk at this point, and the referee was forced to call for the bell as Bulk continued to remain unresponsive while in the submission hold!

BC Steele’s camp was furious after the match! Bulk never tapped out and LeRusso couldn’t handle the fact that Shane had gotten the best of them. To make matters worse, Shane then took to the microphone and announced that he would cash in his Title Shot at Proving Ground to challenge LeRusso for his Super Indy Championship! Has Shane gotten in the head of “The Heir Apparent?” Or will Proving Ground be another opportunity for LeRusso to prove why he is the self-proclaimed greatest Super Indy Champion of all time?

As in 2016, Reloaded 3.0 featured a Fatal 4-Way Elimination Match to determine the first entrant into the 16th annual Super Indy Tournament. The participants were chosen by the Reset Button and the selections didn’t disappoint! Last year’s runner-up in the tournament, Jonathan Gresham, Sless Taylor and Dominic Garinni were all introduced to cheers. And then there was the final entrant… 2016 IWC Rookie of the Year and without a doubt the loudest member of Team Storm, Jaxon Argos, who needless to say, didn’t receive the same treatment from the Court Time fans.

After Taylor and Argos had been eliminated, Gresham was able to finally pin Dominic Garinni to win the match and advance as the first entrant in the Super Indy tournament! In a post-match interview, Gresham admitted that the sting of losing in the finals last year is something he hasn’t gotten over, and with this impressive win at Reloaded, he may in fact be the early favorite to win the whole thing this year!

Corey Futuristic’s mysterious new friend was nowhere to be found as The STD’s were defeated by the debuting Mega Plowers, “The King of the One Night Stands” Jock Samson and “Magnum CK” Chris Kahn. As evidenced by Brian McDowell’s frustration at ringside following the match, Corey’s antics are beginning to cost the team matches and the other Sexy Talented Dudes continue to question his sanity. Remember, none of them have actually seen this new friend he keeps talking about…

In other action, Britt Baker defended her IWC Women’s Championship for the first time, successfully defeating Impact Wrestling Knockout Chelsea Green, who was selected by the Reset Button. Also, DJZ managed to get back on the right track after surrendering the IWC World Heavyweight Title last month at Winner Takes All due to injury. He defeated Jimmy Vegas in a match to determine the new Number One Contender! It’s clear that Britt is on the top of the mountain as the first IWC Women’s Champion, and DJZ is quickly climbing his way back up!

Next month IWC comes to Rural Valley as we present Proving Ground 6! Already announced is the Super Indy Title match between Chris LeRusso and Shane InYaFace, and more announcements will be made in the coming weeks. Check back here at IWCwrestling.com for the latest updates! Tickets are available now!