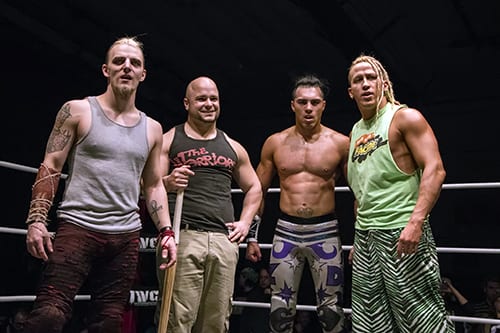 This past weekend The Court Time Sports Center in Elizabeth, PA was the setting as we celebrated the Sixteenth Anniversary of IWC! Emotions ran high on a night meant to look back positively on the past, while also looking ahead to the future!

The main event of IWC Sixteen saw the dominant, undefeated IWC World Heavyweight Champion, Wardlow defend against the former 2-time Champion, DJZ! Justin LaBar’s top client certainly had the advantage from the get-go, outmatching the challenger by six inches and nearly one hundred pounds! The experience of the former champion more than made up for the lack of size, however. DJZ is the youngest IWC World Heavyweight Champion in history, and the only IWC Triple Crown Champion!

The challenger used his speed and experience, trying to outlast the big man, but it was just too much to overcome. After a battle that left the IWC fans standing, “The Man with War in his Name” was finally able to put DJZ away after slamming him from the top rope to the hard canvas below! LaBar mocked IWC Owner Justin Plummer at the production table on their way back to the locker room, rightfully questioning who, if anyone, can take the Championship from Wardlow.

A great showing for DJZ, he gingerly rose to his feet and thanked the Court Time fans. Following the match the former champion was joined in the ring by three of his closest friends, and three men who helped shape the face of IWC: Facade, Gory and Deeeeeelicious Jimmy DeMarco! The four IWC mainstays each took to a corner and posed for the fans, truly taking in the moment! It was a lasting picture that will play over and over throughout the course of history in IWC!

For the past number of years, Andrew Palace has been one of the top Superstars in IWC, if not, the top Superstar. Following an impressive victory over Matthew Justice at Sixteen, Justin Plummer rewarded Palace by naming him Number One Contender to the IWC World Heavyweight Championship! This didn’t sit well with Jack Pollock. The leader of Team Storm has been undefeated since coming to IWC in December, including a victory over Suge D earlier in the evening! Andrew Palace was quick to point out the interference from Jaxon Argos and RC Dupree that led to Pollock’s victory over Suge, and the two almost came to blows!

Justin Plummer interrupted and told Pollock he would have to wait his turn, but there’s no denying the heart of Andrew Palace! He instead challenged Pollock to a Number One Contender’s match on April 7th at IWC High Stakes in Wheeling! Has Andrew Palace finally gotten his wish? Can he finally beat Pollock one on one and shut his mouth for good? Or has the leader of Team Storm actually outsmarted us all? He’s inserted himself into the IWC World Heavyweight Title picture and if everything goes Pollock’s way, he’ll essentially take Palace’s spot… a spot he feels should have been his all along!

IWC Tag Team Champions, The Fraternity, picked up another successful title defense in perhaps their biggest win to date over the returning Flippin’ Ain’t Easy, comprised of Facade and Gory! The returning fan favorites made their entrance from the top of the balcony at The Court Time Sports Center, repelling down to the floor below! The IWC mainstays came close on more than one occasion to dethroning the Champions, but Channing Decker and Trent Gibson, though loud, obnoxious and annoying, were able to pick up the win and continue to prove their dominance in the Tag Team division. During their post-match celebration, Decker and Gibson sarcastically asked who was next. Who wanted to step up and prove that Fraternity ISN’T eternity?

It was a question that was answered quickly. The lights at The Court Time Sports Center went out and moments later, Broken Matt Hardy appeared on the video screen with his brother, The Nefarious Brother Nero! The Broken Hardyz reminded everyone of their Expedition of Gold, their quest to become the greatest Tag Team Champions in all of space and time. They promised to teleport to Meadville on April 8th and DELETE the reign of The Fraternity as the IWC Tag Team Champions at Night of the Superstars! Will Decker and Gibson pick up the biggest win of their careers? Or will they fade away and classify themselves as obsolete?

Chris LeRusso escaped another IWC Super Indy Title defense at Sixteen, this time at the expense of IWC Legend, “Big League” John McChesney. The former multi-time World Heavyweight and Super Indy Champion had LeRusso beat on more than one occasion, but thanks to manager BC Steele and Bulk Nasty being in the right place at the right time, the referee was hardly ever in good enough position to see a pinfall and make a count for the challenger. McChesney wasn’t able to truly gain the upper hand and was eventually pinned by LeRusso thanks to the champion grabbing a handful of tights!

This won’t be how the story ends for these two, however. It was announced that McChesney will get his rematch at Night of the Superstars on April 8th in Meadville, and this time Ricky “The Dragon” Steamboat will be the Special Guest Referee! Will Chris LeRusso’s reign come to an abrupt end at Night of the Superstars? Ironically, the same event where he was defeated for the first time in an IWC ring last year!

The Tag Team scene in IWC continues to heat up as more and more teams begin to make an impact! The Mega Plowers were able to defeat Remy LaVey and Keith Haught, The Upper Echelon and Team Storm in a Fatal 4-Way Tornado Tag Team Match. Team Storm seemed to be on their way to victory when an unannounced appearance from The STD’s caused all kinds of confusion and chaos at ringside. Chest Flexor and Cory Futuristic demanded to be inserted into the match, Billy Ruxpen whaled his arms around repeatedly, and Jaxon Argos was used as a human ping pong ball, thrown over the top rope, and then tossed back in after being caught by his opponents on the outside! Once the referee was finally able to restore order, Magnum CK hit a huge Powerbomb on Argos and scored the pinfall! Following the match, tension seemed to be brewing between The Mega Plowers and Team Storm. Will these teams look at the bigger picture and try to vie for an opportunity at the Tag Team Titles down the line, or are they too focused on each other?

Jami Jamison certainly made an impact last month at Proving Ground, answering the open challenge of IWC World Heavyweight Champion, Wardlow! “The Country Hammer” continues to take opportunities as they come, answering yet another open challenge at Sixteen. This time, Jamison answered the challenge of the returning J-Rocc, who before the match took to the microphone, discussing the legacy of IWC and demanding the fans “Give it up One Time!”

Before Jamison could get in the ring, however, Marshall Gambino attacked J-Rocc from behind! Any questions we had were quickly answered as Jamison joined in the beating… it was a setup! J-Rocc struggled to fight back until Shane InYaFace made the save and came to the aid of the returning “Big Daddy of Destruction.” Justin Plummer did his best tribute to soon-to-be WWE Hall of Famer, Teddy Long, and made a Tag Team Match between the four right then and there!

Jamison and Gambino picked up the victory and announced a new partnership of sorts after the match. Marshall plans on taking Jamison under his wing, which is bad news for anybody that knows the history of Marshall “The Bull.” As for the team of Shane and J-Rocc? A partnership between the two doesn’t seem likely as J-Rocc attacked Shane following the exit of Gambino and Jamison. J-Rocc is an accomplished Tag Team wrestler, but these days he probably feels it’s best for him to “Give it up One Time” alone.

In other action, Dylan Bostic made his return to an IWC ring to face the always entertaining RJ City. The Court Time fans hadn’t forgotten Bostic and were quick to remind him how they felt about The Platinum World Tour. Justin LaBar accompanied Bostic to ringside, but his interference proved ultimately ineffective as City was able to deliver his always-popular Knee Arthur maneuver and pick up the victory!

It’s no secret RJ’s charisma is arguably unmatched and when you add a microphone, there’s no denying that statement. City thrives on the opportunity to prove his dominance on the microphone and he’ll get that chance on April 8th at Night of the Superstars when he faces someone just as comfortable as himself on the mic, Mr. Anderson… Anderson.

It’s going to be a busy few weeks for IWC, as next up on the calendar is The Benefit Brawl on March 25th in Sarver, PA. From there we look forward to the weekend of April 7th as we invade Wheeling, WV for High Stakes on Friday night, and on Saturday, the 8th, we return to Meadville, PA for Night of The Superstars 6 featuring Mr. Anderson, Ricky “The Dragon” Steamboat and The Hardyz! Keep checking back here at IWCwrestling.com and on our official Facebook page for the latest information on these upcoming events. Tickets are available now!