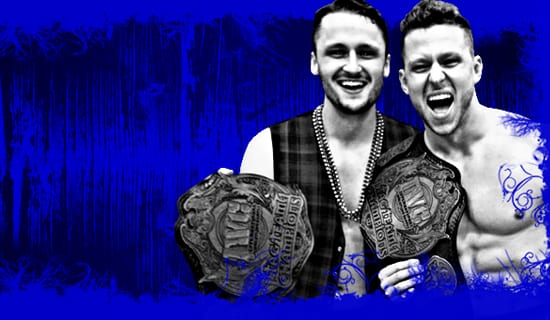 IWC returns to Clearfield, PA on Saturday night April 29th, 2017! Clearfield Carnage 2 kicks off the action at 7:30 PM and we always bring the best and brightest of IWC to our home away from home. Several matches have been announced so far with much more to come soon…

The situation between Chris LeRusso, John McChesney, Bulk Nasty, and Daniel Hooven has been bubbling over for some time now, and is set to explode in Clearfield! McChesney has taken former IWC ringside photographer Hooven under his wing, training him to be a wrestler while teaching him the ways of “Team Big League”. Meanwhile, McChesney and LeRusso have been feuding over the IWC Super Indy Championship, with McChesney getting the win over LeRusso for his record-breaking 5th Super Indy Title reign at Night of the Superstars 6 in Meadville. The four men are set to do battle against each other in singles action at IWC Aftershock Vol. 2: The Road to Super Indy on May 13, but first they’ll do battle in tag team action on April 29 at Clearfield Carnage 2! Which duo will walk away with momentum heading into Aftershock Vol. 2?

The Battle of the Britts takes place on April 29th as IWC Women’s Champion Britt Baker defends her title against Brittany Blake! Blake makes her IWC debut in the biggest way possible, looking to knock the Mayor of #BRITTSBURGH off of her throne. But will the pint-sized punk be able to

The IWC World Heavyweight Title will be on the line in a first time ever match! The defending champion WARDLOW will take on “The Reaper” Matt Conard! All eyes are on Conard after his performance at Night of the Superstars 6 alongside his Headless Horsemen teammate Gory as they took on The Fraternity on behalf of WWE Raw Tag Team Champions The Hardys. Will he be able to defeat the undefeated? Will Wardlow’s reign of dominance over IWC continue?

By the time IWC reaches Clearfield, PA, they will be the team who have held the IWC Tag Team Championships for more days than any other. As a result, they have announced they will be having a Tag Team Championship Record Celebration in Clearfield! But two men looking to ruin that celebration are the returning “Big Time” Bill Collier and “Playboy” John Atlas! The monstrous Collier is no stranger to IWC, but returns with a different frame of mind and a more dominant attitude than ever before. Atlas previously appeared in the Proving Ground Battle Royal at Winner Takes All in December 2016 with an impressive showing for a newcomer, ending up in the Final Four. Will these two be able to ruin the Frat’s celebration on April 29th?